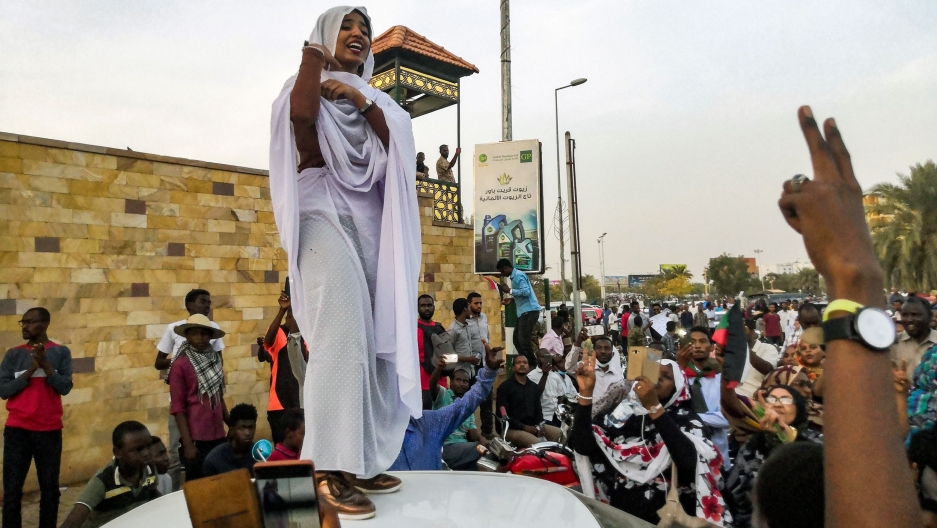 Alaa Salah, a Sudanese woman propelled to internet fame earlier this week after clips went viral of her leading powerful protest chants against President Omar al-Bashir, addresses protesters during a demonstration in front of the military headquarters in the capital Khartoum on April 10, 2019. Dubbed online as Kandaka, "Nubian queen," she has become a symbol of the protests which she says have traditionally had a female backbone in Sudan.

When Hind Makki, a Sudanese American interfaith and racism educator in Chicago, first saw the image, she was blown away.

“I was rendered speechless,” she said, “because of the amazing imagery and the symbolism that was inherent in the photo.”

The image was taken by Sudanese photographer Lana Haroun in the capital Khartoum.

There have been ongoing protests in the country since last December. The outpouring has been gaining more momentum in the past few days. Protesters have been calling for the resignation of President Omar al-Bashir. They have staged sit-ins in front of the presidential palace and the army headquarters that continue overnight.

Judging by the warm lighting in the photo, Makki thinks it was likely taken at sunset or dawn.

It shows a young woman in a traditional Sudanese outfit called the thobe. She is standing on the roof of a white car. Her index finger is pointing to the sky, and she is surrounded by a sea of protesters — mostly women. They are holding their cellphones up, directed at her and they are capturing the moment.

Makki wrote a Twitter thread about the photo's significance.

Sudanese everywhere are referring to female protestors as "Kandaka," which is the title given to the Nubian queens of ancient Sudan whose gift to their descendents is a legacy of empowered women who fight hard for their country and their rights. ✊🏾

According to Marie Grace Brown, an assistant history professor at the University of Kansas, the white thobe is an iconic dress that Sudanese women wore throughout the 20th century.

“Beginning in the 1940s and '50s, Sudanese women activists consciously wore the white thobe as a modest garment that was a way of standing in a way of contrast to their radical and outspoken demands, and so by wearing the white thobe, this woman is evoking the fashions of past generations.”

Brown, who is also the author of "Khartoum at Night: Fashion and Body Politics in Imperial Sudan" also points to the protester’s gold, circular earrings that are known as "moon earrings."

“Jewelry has been the means by which Sudanese women hold their wealth,” Brown said, “so that jewelry is passed on from mother to daughter, and so that addition of that gold earring is also evoking women’s wealth and domestic power.”

On Monday, when the photo went viral on social media, there was no information about the woman in the photo. That heightened curiosity and speculations.

“I think she definitely wanted to make a symbolic statement,” said Makki, who was searching around to find the identity of the subject in the photo. She had heard that the organizers of the protests had asked women to come out in these white thobes, she thinks, for visual reasons.

And it has paid off.

Social media users have compared the woman in the image to the Statue of Liberty in New York City, among other iconic symbols.

After 24 hours of suspense, Arabic media reported that the woman in the photo is Alaa Salah and that she’s a 22-year-old student studying engineering and architecture at Sudan International University in Khartoum.

A friend of hers told BuzzFeed that Salah wants to overthrow the regime because the situation is unbearable for Sudanese people.

Makki thinks that many Sudanese women see the image and immediately connect with it.

“I think any Sudanese person would see this photograph and immediately remember their mother or their aunt or their grandmother […] so there’s a nostalgic element to the photo and I think it represents a certain kind of Sudanese empowered femininity,” she said.

Makki says women have been at the forefront of the protests in Sudan. Initially, she says, some were reluctant to join the overnight sit-ins fearing their for safety. But on Monday night, she said, as she was following a Facebook Live of one of these sit-ins, she heard the person capturing the video say, "Let’s get the girls behind us." So, these women had stayed along with the male protesters, Makki says.

Brown, the associate professor, confirms that women have been taking a major role in the protests.

“I think that for a long time, we have underestimated the political power of Sudanese women. There have been estimates that in the current protests, 60%-70% of the people have been women.”

These protests have been going on since December, she adds, and they have received minimal attention from Western media. It took this iconic photo to get the attention of a Western audience.

#AlaaSalah has been called a 'kandaka' - a term used for ancient #Nubian queens
Draped in a traditional white thobe, singing for #revolution the poem "thowra" & surrounded by protesters became a symbol of Sudan’s protest movement.#Sudan_Uprising #Women ✊🏿pic.twitter.com/UP9vEUOsz0