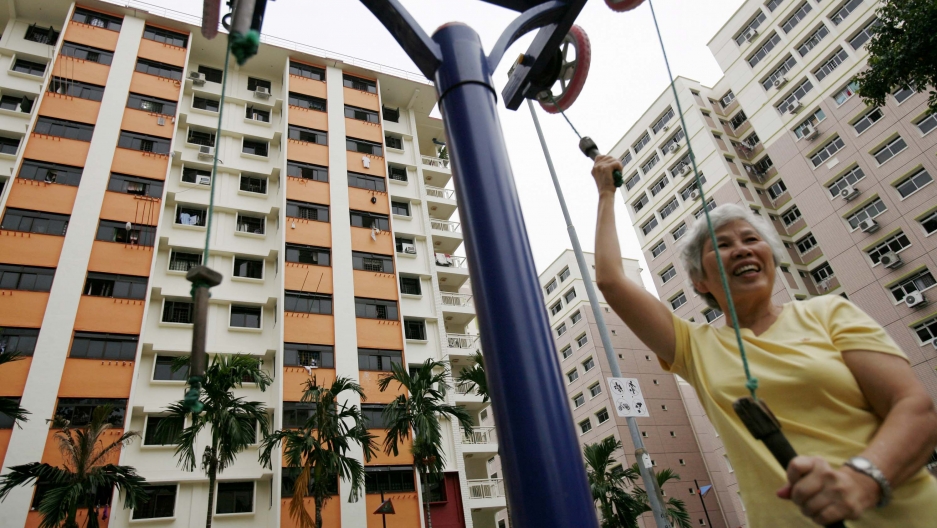 Resident Lim Soo Sei exercises at an open air public gym in a housing estate in Singapore January 14, 2011. The share of households in Hong Kong led by single women has soared in recent decades.

Gentrification is reshaping urban areas all around the world, displacing large segments of the population and making cities increasingly unaffordable.

In San Francisco, only 12% of households can afford a median priced home, which is over $1.5 million. In Hong Kong, the world’s most unaffordable city alongside Singapore and Paris, there are currently some 90,000 families living in inadequate housing conditions.

We study urban development and its social, physical and environmental impacts. We recently examined two decades of cultural transitions in Hong Kong with a focus on how the changing status of women and attitudes toward marriage have altered the real estate market.

What we found is that single women in Hong Kong have played a surprising and little-studied role in gentrification.

Women have been marrying later in life around the world for many years. The extent of this trend has varied globally, though, reflecting different levels of cultural change and resulting in different regional economic impacts.

Throughout the second half of the 20th century, East and Southeast Asia, in particular, witnessed a growing number of single men and women.

Throughout the second half of the 20th century, East and Southeast Asia, in particular, witnessed a growing number of single men and women. From 1950 to 1990, the number of young single women across Asia — China excluded — increased almost fourfold, from 22 million to 82 million.

One reason this trend has happened outside of China is cultural. If you’re a woman and you’re single on the mainland, it’s viewed negatively. Unmarried women over the age of 27 are called “sheng nu,” or “leftover women.” But in Hong Kong it’s seen in a more positive light. There, they’re known as “xing nu,” or “blooming women.”

This trend has produced a ripple effect throughout the economy, including the property market and local redevelopment, as the increased number of single women — who are also attaining higher-paid jobs — boosts demand for housing.

We analyzed standardized census data from 1986 to 2006 across all of Hong Kong, with a focus on exploring the impact of women on neighborhoods that were gentrifying. The analysis, which took four years to complete, identified about 34% of Hong Kong as experiencing gentrification.

The process of gentrification involves capital reinvestment into neighborhoods that encourages their physical upgrading, along with the displacement of groups of lower incomes who have traditionally occupied these communities.

A telltale sign of gentrification is the shift from rentals to owner-occupied housing. The share of units with owners living in them in these areas climbed from 45.5% in 1986 to 64.2% two decades later.

But it is not only the occupational structure that is changing within these neighborhoods. These gentrifying areas have been increasingly dominated by single women.

Single women increased by 53.2% over the two decades, compared with a rise of just 15.2% among single men.

As a result, the share of households led by single women, whether never-married or divorced, jumped to 47.1% in 2006 from just 25.8% two decades earlier.

Overall, not only are single women emerging as a growing and critical aspect of Hong Kong’s economy, they are also driving the city’s increasingly unaffordable real estate market.

There is reason to think the same thing is happening in cities across the world, such as New York, London, Vancouver and Singapore.

While our study focused on Hong Kong, we believe there is reason to think the same thing is happening in cities across the world, such as New York, London, Vancouver and Singapore. That’s because these cultural trends — a rising number of single women in high-paying jobs and a delay in tying the knot — have been happening elsewhere for many years.

For example, in the US, Pew projects that when today’s young adults reach their mid-40s to mid-50s, a quarter of them will never have married, compared with less than 10% a few decades ago. And in Iceland, some 70% of children were born to single mothers in 2016, more than double the share in 1970.

This is not to say that we should blame women for gentrification. We believe their growing representation and success in the workforce in Hong Kong and elsewhere is something to be celebrated. And women at the other end of the income spectrum, particularly single mothers, bear the brunt of gentrification.