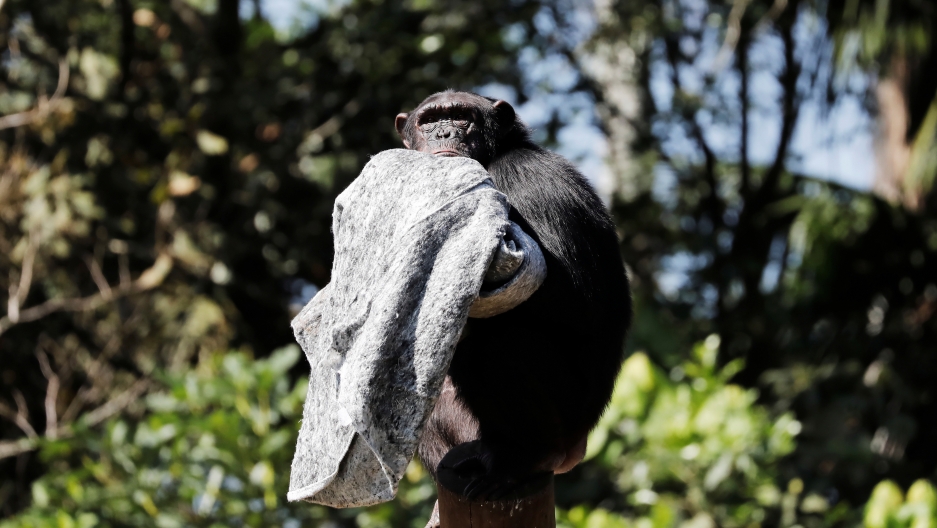 A chimpanzee holds a blanket to protect itself from cold at Sao Paulo Zoo in Brazil.

On average, Americans spend 90% of their time indoors, but when we step outside and observe our animal relatives, we see that our behaviors and abilities are shared across the animal kingdom. Fashion design, interacting with fire, and making multistep plans all seem like qualities that are unique to humans, but according to Adam Rutherford, author of “Humanimal: How Homo sapiens Became Nature’s Most Paradoxical Creature — A New Evolutionary History,” species from crabs to birds of prey exhibit many of these complex behaviors, too.

Fashion, for example. You may have thought that fashion was exclusive to humans; after all, there are no other species strutting down the runway. Of course, there are organisms that decorate themselves, but this is purposefully for sexual selection. Still, there are some animals that do embrace something similar to fashion, for a stylistic purpose.

Take Julie the chimpanzee. For no apparent reason, except perhaps trying to make a fashion statement, the Zambian chimp starting sporting a piece of long grass behind her left ear in 2010. Soon enough, the trend caught on among others in her tribe, with many following suit by putting grass in their own left ears. Julie died in 2012, but members of her own tribe continue to uphold the trend, and it has since caught on in neighboring tribes.

Related: Inside the minds of zoo animals

Rutherford, a British geneticist, also explained how humans behave similarly to other animals when it comes to sexual relations. “Do other animals, not us, have sex for nonreproductive reasons? The answer is yes — all the time. They have loads of nonreproductive sex in every shape and form that you can imagine,” he said.

Another theory about what makes humans unique from other animals is our use of tools. It is now widely known that chimpanzees also use tools, but Rutherford explained how a wide array of species, including crabs, octopuses and birds do as well. “It turns out that about 1% of animals use tools, which doesn’t sound like much but that’s literally thousands of different species. And what’s really interesting about it is they range across classes of animals,” he said. “Loads of animals use tools. None to the degree of sophistication that we do, but there are many, many hundreds, maybe thousands, of animals that are obligate tool users.”

Humans are not even all that special when it comes to the use of fire. Up until 2017, it was thought that no animal apart from us could start a new fire. But then science literature reported a shocking finding — that three different types of raptors in Australia intentionally start fires of their own. These raptors find burning sticks and drop them on piles of brush, where their prey are hiding. The prey then run into the open to escape the flames, giving the raptors a clear opportunity to scoop them up for lunch. “So, we’re not the only animal that can start new fires,” Rutherford said. “We don’t think they can start it from scratch like we can, but who knows? Maybe that’s just coming.”

Related: A 'lexicon' of chimp gestures may tell us things about our own language

Rutherford explained that we’re distinguished from other animals by our ability to share information and culture at a grand scale. This major evolutionary leap forward enabled us to develop our distinct humanness. “[It] all comes from us getting much much better at sharing ideas - we’re a species of teachers,” Rutherford said.

Hannah Uebele is an intern at Innovation Hub.