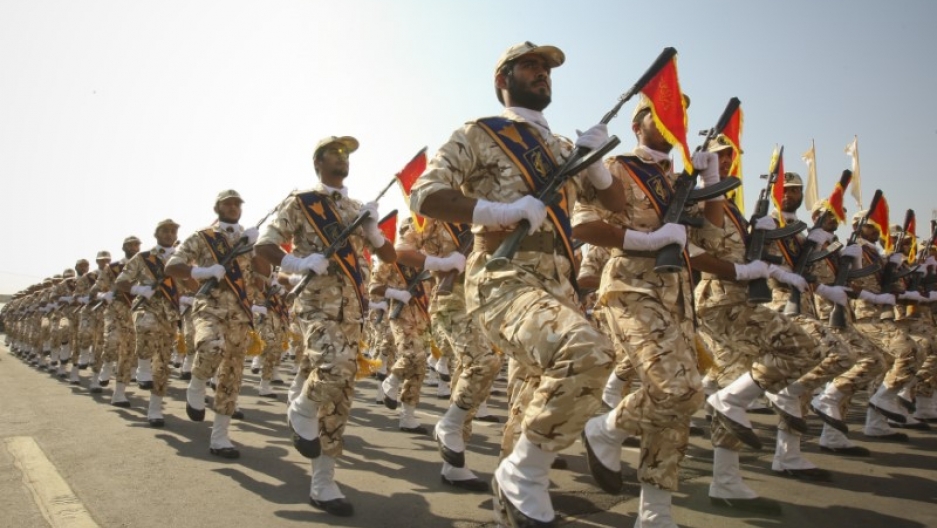 Members of the Iranian Revolutionary Guard Corps march during a parade to commemorate the anniversary of the Iran-Iraq War (1980-88), in Tehran, Iran, Sept. 22, 2011.

US President Donald Trump said on Monday he would name Iran's elite Islamic Revolutionary Guard Corps, or IRGC, a "terrorist organization," in an unprecedented step that drew Iranian condemnation and raised concerns about retaliatory attacks on US forces.

The action by Trump, who has taken a hard line toward Iran by withdrawing from the 2015 Iran nuclear deal and reimposing broad economic sanctions, marks the first time the United States has formally labeled another nation's military a terrorist group.

The US step, which takes effect on April 15, prompted an immediate response from Iran, whose Supreme National Security Council in turn designated US military forces as a terrorist organization, Iranian state-run TV reported.

"The US military bases and their military forces in the region will be considered terrorist bases and terrorist forces that will be dealt with and confronted accordingly," Iran's Deputy Foreign Minister Abbas Araqchi told Iranian state TV, calling the US decision "a major strategic mistake."

Iranian Supreme Leader Ayatollah Ali Khamenei said the United States had made "a vicious move" in designating the IRGC as a foreign terrorist organization. President Hassan Rouhani also defended the corps as protectors of Iran, saying in a televised speech that the United States "holds a grudge" against the IRGC who have "sacrificed their lives to protect our people, our revolution."

Related: Can the Ban Treaty eliminate the threat of nuclear war? The clock is ticking down.

Jarrett Blanc is a senior fellow at the Carnegie Endowment for International Peace. He worked as the lead coordinator for Iran nuclear implementation at the US Department of State under President Barack Obama. Blanc spoke with The World about what these declarations mean.

Marco Werman: What is unprecedented about this, Jarrett, labeling another country's military as a terrorist organization?

Jarrett Blanc: It's very narrowly unprecedented. In the past, the foreign terrorist organization designation has been used for nonstate actors and not for state actors, but the IRGC, Iran, other aspects of the Iranian government, are designated under dozens of other authorities, including terrorism authorities. So, the administration is making a big deal about the exceptional nature of this step. It's kind of a piece with our policy toward Iran since the 1980s.

This announcement has come down, a lot of people are talking about the IRGC. What position does it occupy, exactly, in the Iranian military?

Well, it's a part of the Iranian military. During the Iran-Iraq War, which is really the formative political event, I think, of the Islamic Republic, it played a critical role in mobilizing relatively untrained, unequipped popular support to hold back Iraq. And it has expanded its role ever since. It plays a role in domestic regime preservation; it plays a role in defending the borders; it plays a role in aggressively asserting Iranian interests in the region and abroad. And of course, it's also assumed a fairly large role in Iran's economy. I sometimes think that when people say the IRGC, they're really kind of using a shorthand that in the United States we might call the "military industrial complex."

That's a really good point because it's not just about the military security in Iran. The one thing I found when I was in Iran a couple of years ago was that something you did not discuss with anyone was the business interests of the Revolutionary Guard. So, why is that such a toxic issue?

Well, because it's extremely unpopular in Iran. The IRGC has wanted, I think, to establish that position of power and hasn't wanted a lot of debate about it. I would also say that, to the extent that there is a way to change the IRGC's role in the Iranian economy, it's got to be long term, and it's certainly not what the Trump administration is doing. I think that we were starting to see, and there's only anecdotal evidence of this, but I think that we were starting to see, under the implementation of the Joint Comprehensive Plan of Action, with the Iran nuclear deal, the IRGC reducing its position in Iran's real economy — selling off industrial assets and putting that money into real estate or other things. And there's a reason for that, which is that, when Iran is under very, very severe sanctions, there's a huge benefit to having a partner or an owner that's able to work in the black market or the gray market. The IRGC does that. When Iran is under looser sanctions, but the IRGC is still sanctioned, which is what was going on under the nuclear deal — now you've got a real liability if you're owned or partnered with the IRGC because if a European auto parts company wants to work with you, they can't. And so, there's no longer the advantage of working in the black and gray market, and there's a huge disadvantage being partnered up with a toxic entity.

A move like this, labeling the IRGC a terrorist organization, it's been debated for years. Why now?

That's a great question, and I'm certainly not plugged into the high levels of the Trump administration to be able to answer it. You know, it's been debated, I think, largely because, as almost a sort of semiotic point, it makes sense. The IRGC is a terrorist organization.

But on the other hand, there are risks. There are risks that Iran might rise to the bait — which they have not done for previous provocations out of Washington — and lead to an escalatory cycle. There's also a risk that at some lower level, a commander might see this rhetorical back-and-forth and say, "Hey we've got we've got a terrorist on the other side of the battlefield" — whether that's in Iraq or Syria in the Gulf or elsewhere — and provoke a flare-up that neither side was really intending.

Do you see this as any kind of pressure on Iran at all, a designation like this?

I do not think that it is meaningful pressure on Iran at all. The IRGC, the government of Iran, are so substantially sanctioned already that I don't see there being any new pressure here.

What are you going to be watching for next?

Well, again, I think that it's entirely possible that it just ends here. Both sides have made their point, and we move on with a bad, but not deteriorating, relationship. I think there is a big question about what this means from Washington. Is this an indication that the hard-liners in the Trump administration have won the debate, and they're going to keep pressing until they create a crisis? Alternatively, is it an indication that they've lost the debate, and this was just sort of a not particularly substantive sop that was thrown to them? Or finally, you know this is an administration that has real problems with internal policy coordination; is this just a decision in a vacuum that doesn't tell us anything really about what comes next with Iran?