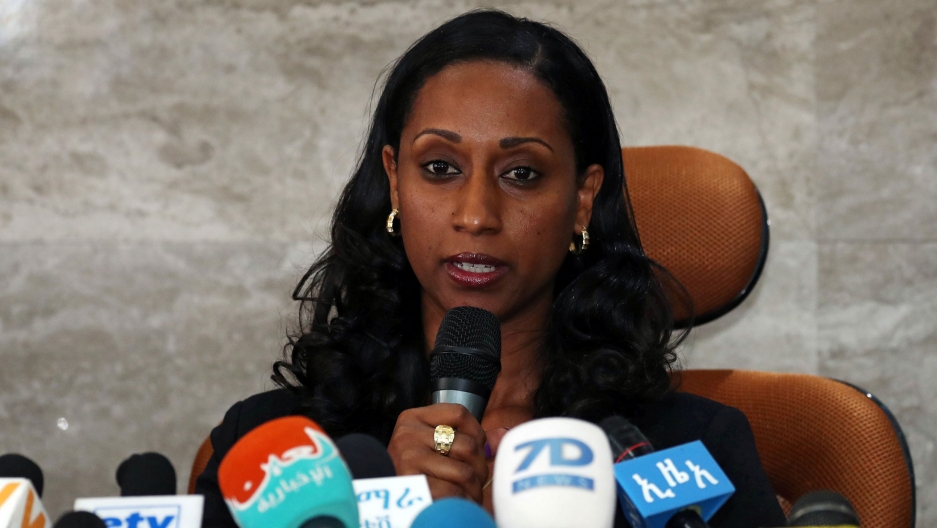 Ethiopian authorities said on Thursday pilots of state carrier Ethiopian Airlines had carried out proper procedures and urged Boeing to review its flight control technology. The statement is the first public findings on the crash of a 737 MAX jet that killed 157 people.

The doomed flight repeatedly nosedived as the pilots battled to control the nearly full aircraft before it crashed six minutes after take-off from Addis Ababa in clear conditions, Ethiopian authorities said on Thursday.

"The crew performed all the procedures repeatedly provided by the manufacturer but was not able to control the aircraft,"  Transport Minister Dagmawit Moges told a news conference, presenting the outlines of a preliminary report,

Investigators are expected to publish the report by Friday.

Boeing's top-selling aircraft has been grounded worldwide since the March 10 disaster, which came just five months after a Lion Air 737 MAX crash in Indonesia that killed 189. An initial report into that accident also raised questions about the jet's software, as well as training and maintenance.

Families of the victims, regulators and travelers around the world have been waiting for signs of whether the two crashes are linked, and the extent to which Boeing technology and the actions of the Ethiopian Airlines pilots played a role.

Ethiopian investigators did not blame anyone for the crash, in line with international rules requiring civil probes to focus on technical recommendations for safer flight. Nor did they give a detailed analysis of the flight, which is expected to take several months before a final report due within a year.

But in a clear indication of where Ethiopian investigators are directing the attention of regulators, they cleared the pilots of using incorrect procedures and issued two safety recommendations focused on the recently introduced aircraft.

They suggested that Boeing review the flight control system and that aviation authorities confirm any changes before allowing that model of plane back into the air.

"Since repetitive uncommanded aircraft nose down conditions are noticed ... it is recommended that the aircraft control system shall be reviewed by the manufacturer," Dagmawit said.

The nose-down commands were issued by Boeing's so-called MCAS software. The preliminary report into the Lion Air disaster suggested pilots lost control after grappling with MCAS, a new automated anti-stall feature that repeatedly lowered the nose of the aircraft based on faulty data from a sensor.

The US Federal Aviation Administration, which has come under fire over the way it decided to certify the MCAS software, cautioned the investigation had not yet concluded.

"We continue to work toward a full understanding of all aspects of this accident. As we learn more about the accident and findings become available, we will take appropriate action," the US agency said in a statement.

Boeing said it would study the report once it was released.

Ethiopian Airlines said its crew had followed all the correct guidance to handle a difficult emergency.

However, the report could spark a debate with Boeing about how crew responded to problems triggered by faulty data from an airflow sensor, particularly over whether they steadied the plane before turning key software off.

Questions on whether the pilots had leveled out the plane before disengaging MCAS and how many times MCAS activated were not answered in a news conference that lasted about 40 minutes.

Following a previous Ethiopian Airlines accident off Beirut in 2010, Addis Ababa authorities rejected the conclusions of a Lebanese investigation citing pilot error and suggested the aircraft had exploded in a possible act of sabotage.

Officials denied reports of tensions between Ethiopian officials and US and other foreign investigators accredited to the current probe.

"We don't have any reservations from different stakeholders who were engaged in the investigations," chief investigator Amdye Ayalew Fanta said.

Aviation safety analyst Paul Hayes said deeper investigation would delve into the role played by software and how pilots were able to respond, and said he hoped scars from the 2010 dispute would not get in the way of a comprehensive investigation.

"Pilots shouldn't have to cope with such an emergency situation. We need to understand what are the factors that meant these two crews were overcome," said Hayes, safety director at UK-based consultancy Flight Ascend.

"It is unusual for there to be a single cause," he added.

Boeing said on Wednesday it had successfully tested an update of the MCAS software designed to make it easier to handle.