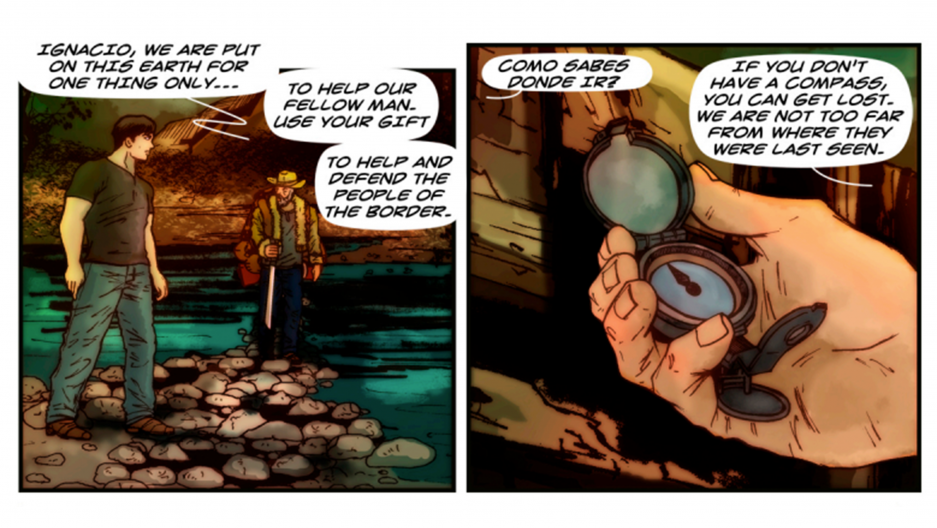 As a young boy, El Peso Hero assumes his powers of super strength by accident and enters the role of local hero for the unseen and unheard.

Defender of immigrants, hero to the disenfranchised and growing vexation for Mexican cartels, corrupt officials and human traffickers, El Peso Hero makes waves along the border — as a comic book superhero. 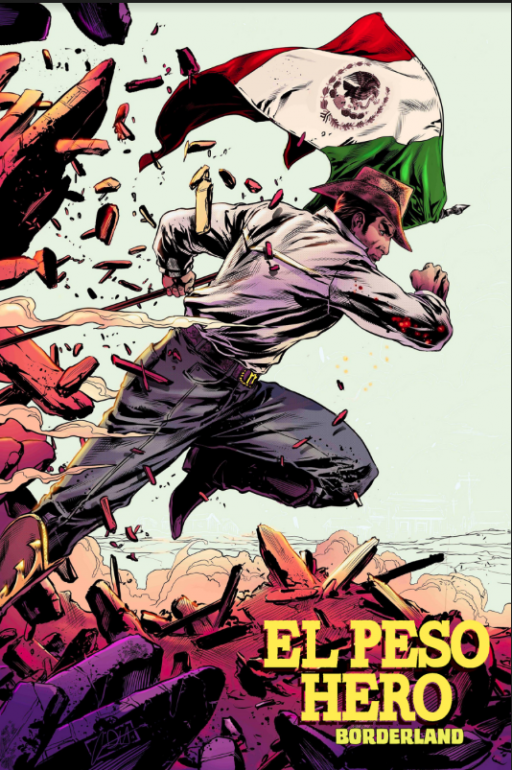 El Peso Hero is the first contemporary Mexican superhero who uses his strength to protect people along both sides of the US-Mexican border.

El Peso Hero is the story of the first contemporary Mexican superhero who uses his strength to protect people along both sides of the US-Mexican border. As a young boy, he assumes his powers of super strength and unbreakable skin by accident and reluctantly enters the role of local hero for the unseen and unheard. Crime waves are sweeping the city, cartels have lay of the land and El Catrin, a local cartel boss, holds the puppet strings to government officials. El Peso Hero steps out to defend the powerless.

It's the modern-day realities of the border — often destructive and deadly — that influence the series “El Peso Hero.” In the ninth and latest book, “El Peso Hero: Borderland,” El Peso Hero joins a group of refugees as they go through the registration process at a detention facility and face the dire conditions.

But the real-life story of El Peso Hero began much earlier — with me. When I was young, my father introduced to me comic books. A military man, he was an avid follower of Mexican and American comics, like Kaliman, Chanoc, Sgt. Rock and Captain America. But where I grew up — on the border in the small town of Eagle Pass, Texas — comic book stores were hard to come by. To find my greater-than-life heroes, I resorted to watching Mexican novelas with my mother and movies with action and comedy icons like “Santo el enmascarado de plata,” Mario Almada and “Capulina.”

Culturally, other superheroes didn’t connect with me. Have you ever seen Batman eat empanadas de calabaza?

It wasn't until I was 8 years old and we moved to central Texas that I finally had access to comic book stores. I became an avid reader, but also started to draw my own stories. I liked Batman, Superman, and all the Marvel superheroes, but I wasn't really interested in following their exploits. Culturally, they didn’t connect with me. Have you ever seen Batman eat empanadas de calabaza?

In high school and throughout college I pursued more formal art classes and became involved in social and community issues, advocating for bilingual education programs and promoting equity in student government. But El Peso Hero didn't come onto the scene until 2003 when my grandfather told me a rumor of a renegade group of Mexican commandos who created a criminal organization. I began to imagine a local superhero of Mexican descent fighting the group. Once I came home, I began writing the script for El Peso Hero.

El Peso Hero has many names along the border. His real name is Ignacio, but the Mexican Federal Police gives him the code name “El Toro Pesado” — "The Heavy Bull," a myth and rumor who disrupts cartel activity. Across the border, the border patrol agents begin calling him El Peso Hero as a way of belittling his heroics — as in, “El Peso Hero is not worth a devalued peso.” But the people embrace that nickname — a right of passage along the border — as their own.

I wanted the hero to uniquely embody the border culture and combat its problems. With his iconic belt buckle with initials PH and cowboy boots to represent the Northern Mexican Norteño culture, El Peso Hero takes on immigration, human trafficking, border violence and corruption. And El Peso Hero speaks only in Spanish; it is important for him not to lose his culture, language and self. 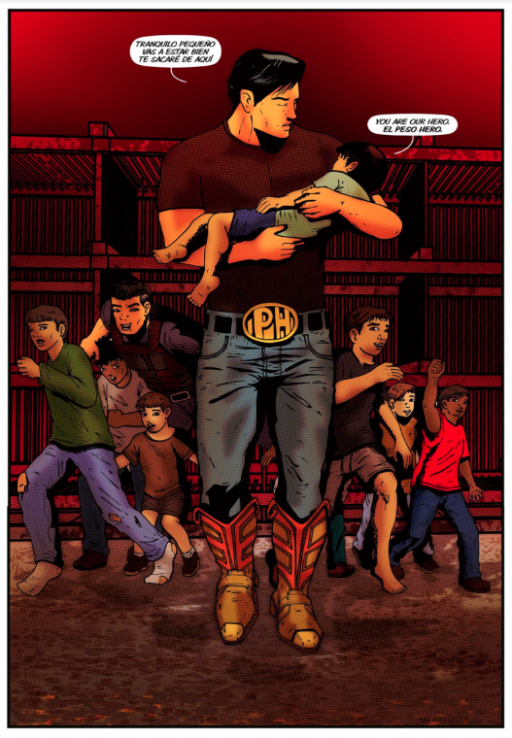 In the ninth and latest book, “El Peso Hero: Borderland,” El Peso Hero joins a group of refugees as they go through the registration process at a detention facility and face the dire conditions.

When I first published El Peso Hero in 2011, the reader response was huge. They loved the relevance of the story, they enjoyed the diversity of the characters and Latinos felt they were positively represented in the comic book medium. Over 5,000 printed copies sold the first year.

But my biggest surprise was the positive reaction from the English-speaking fans from across the political spectrum. Some of the most unlikely fans? Border patrol agents who have voiced their support for El Peso Hero at comic book conventions and shared their own related stories.

I have always kept my artistic world and my professional career separated — my day job is as an elementary bilingual teacher in Dallas. That was short-lived when my students started seeing me on TV. Students get excited about seeing all these things. They feel like they own El Peso Hero themselves, he's something very accessible to them. Maybe he even looks like their tío, or uncle, dressed in blue jeans and boots. I’ve even had a student write a corrido, or epic Mexican ballad, of El Peso Hero. It’s exciting to see them excited about him.

Nearly 60% of students in Texas are Latino. For them, it's empowering to see someone with a last name like theirs making comic books with a superhero that speaks Spanish. They have a lot of questions about the hero and the process — they want to make their own comic books.

Now, I’m writing the conclusion of El Peso Hero's journey, but sometimes the headlines catch up to me. Somethings that I wrote about years ago — ICE neighborhood roundups, American citizens being accidentally detained, a surge of detention facilities along the Texas-Mexican border and the impact on children in the community — are unfortunately coming true now. It’s an impossible situation he faces. The story progresses through struggle. And sometimes it's more about the characters around him and how they respond to this unwavering character with a strong moral compass.

But take away all the layers — male, Latino, Mexican, Spanish-speaking, Norteño — and deep down inside it’s a very human story. El Peso Hero is universal.

Editor's note: Héctor González Rodríguez III is the creator of El Peso Hero and founder of Rio Bravo Comics, an independent comic book publisher based in Dallas, Texas. Rodríguez is also a bilingual educator and a fellow with the Global Nation Exchange on Facebook. Join the GNE forum and chat with him on Facebook.