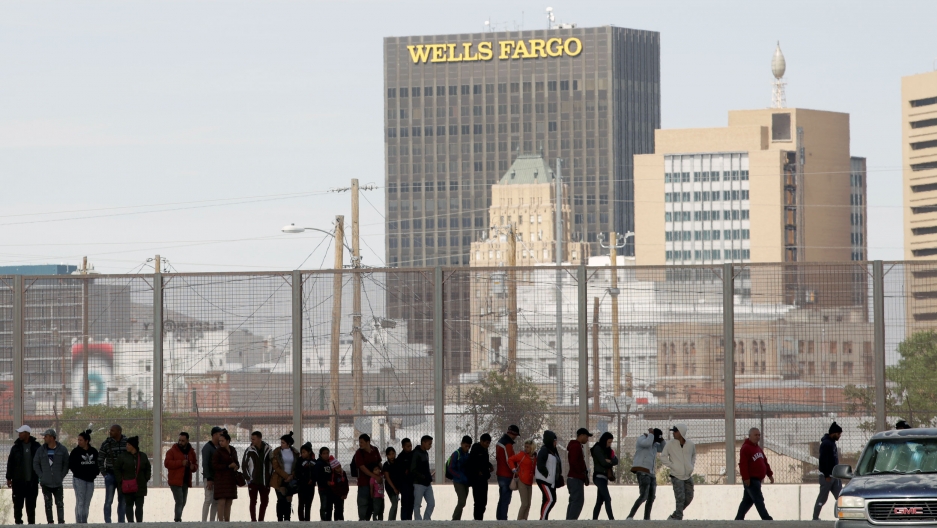 Migrants from Central America are escorted by US Customs and Border Protection officials after crossing into the United States illegally and turning themselves in to request asylum in El Paso, Texas, on April 1, 2019. The photo is taken from Ciudad Juarez.

Mexico is doing NOTHING to help stop the flow of illegal immigrants to our Country. They are all talk and no action. Likewise, Honduras, Guatemala and El Salvador have taken our money for years, and do Nothing. The Dems don’t care, such BAD laws. May close the Southern Border!

Trump also said he is “100 percent” ready to close the US southern border if Mexico doesn’t stop Central American migrants from heading north.

The DEMOCRATS have given us the weakest immigration laws anywhere in the World. Mexico has the strongest, & they make more than $100 Billion a year on the U.S. Therefore, CONGRESS MUST CHANGE OUR WEAK IMMIGRATION LAWS NOW, & Mexico must stop illegals from entering the U.S....

....through their country and our Southern Border. Mexico has for many years made a fortune off of the U.S., far greater than Border Costs. If Mexico doesn’t immediately stop ALL illegal immigration coming into the United States throug our Southern Border, I will be CLOSING.....

....the Border, or large sections of the Border, next week. This would be so easy for Mexico to do, but they just take our money and “talk.” Besides, we lose so much money with them, especially when you add in drug trafficking etc.), that the Border closing would be a good thing!

Mexican President Andrés Manuel López Obrador is engaging in a delicate balancing act by refusing to confront Trump’s attacks head-on while also consenting to some of the more hardline aspects of US immigration policy.

López Obrador’s demure response to Trump might surprise some who followed Mexico’s presidential election last year. On the campaign trail, López Obrador insisted that Trump would have to respect Mexico, and that if Trump wrote something disparaging about Mexico on Twitter, “there would be a response.”

But as president, López Obrador, or AMLO, as he’s known, has refused to engage.

“We are committed to keeping a good relationship with the US. One of friendship, cooperation and mutual healing,” he said at his morning news conference on Tuesday. “We are not going to fall to any provocation.”

“In a nutshell, AMLO doesn’t really want to start a fight with Trump knowing that it won’t lead anywhere,” Illades said. “If he answers back, Trump will just escalate the rhetoric and AMLO won’t get very much out of it and, on the contrary, it will just make things worse.”

Related: US rolls out 'Remain in Mexico' plan for asylum-seekers

There’s a lot on the line for Mexico — like the updated NAFTA agreement, which still hasn’t been ratified. Illades said López Obrador can’t risk losing that. So instead, López Obrador is pursuing diplomacy behind the scenes, including meeting Jared Kushner for dinner last month in Mexico City at the house of a television tycoon.

“He is using the old strategy of trying to find a back channel with the Trump administration,” Illades said.

One of the discussion points at that dinner was López Obrador’s new strategy: A desired regional policy to address the root causes of Central American migration, including poverty, violence and organized crime.

López Obrador is asking the US to guarantee $10 billion in development investments for Mexico and Central America. Such a commitment appeared to be moving forward until Trump doubled down on his promise this week to cut off aid to Honduras, El Salvador and Guatemala.

The problem is that most Central Americans still want to reach the US, said Gretchen Kuhner, director of Institute for Women in Migration, an immigration rights group in Mexico City.

“So, while more people are staying in Mexico to request asylum than ever before, many people are also arriving at the US border,” she said.

And despite López Obrador’s long-term goals for regional stability, the Mexican president has helped carry out some of Trump’s most hardline immigration policies.

Most significantly, and to the surprise of just about everyone, López Obrador tacitly accepted the Trump administration’s new policy requiring asylum seekers to remain in Mexico while their cases play out in US courts. Mexican immigration officials are also refusing to let Central American migrants without visas onto international bridges to apply for asylum in the US and intercepting unaccompanied minors seeking to cross. Since 2015, Mexico has deported more Central Americans than the US.

Mexico wants to have it both ways, said Carlos Bravo Regidor is a professor at CIDE, a university in Mexico City. He said López Obrador’s administration wants a humanitarian policy toward Central Americans — but not at the expense of its relationship with the US.

“I think it’s clear that this government at least in principle wants a policy that is more sensible to their situation, to the emergency that they are facing, and more respectful of their rights,” he said. “On the other hand, this administration wants to play ball with the US.”