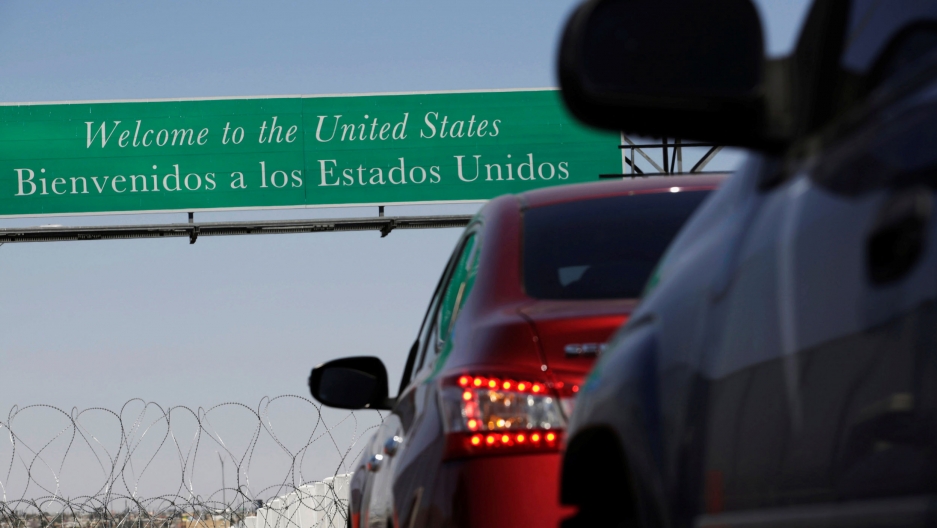 But Mexican President Andrés Manuel López Obrador said he would not have a confrontation with the United States.

The leftist president has consistently refused to get drawn into a war of words with Trump over the border.

A senior Mexican trade official warned later that closing down the US-Mexico border would cause pain on "both sides."

Most of the people caught at the frontier trying to enter the United States illegally come from three violent and impoverished countries: Honduras, Guatemala and El Salvador.

Roberta Jacobson was appointed US ambassador to Mexico in 2016 by President Barack Obama. She resigned in May 2018. She spoke with The World's Marco Werman about what Trump's threat means for the US-Mexico relationship.

Marco Werman: Ambassador, you were a great champion of cooperation with Mexico. Mexico now wants more cooperation under Andrés Manuel López Obrador, the new president. Why do you think AMLO, as he's known, was critical of Trump when he was campaigning, and now that he's president of Mexico, he seems to be supporting Trump or at least wants back in the orbit?

Obviously, people campaign differently than they govern. And you're right, he campaigned in a more aggressive fashion, but he was pretty careful not to make his campaign too personal vis-a-vis the president in the US. But he also told me that he believed the relationship with the United States was the most important thing that he needed to address, and therefore he was going to do everything he could to keep that relationship positive.

You'd been a diplomat for 30 years, served under five presidents. Why did you quit under Trump?

Well, for me, it became increasingly difficult to defend some of the administration's policies. But it also is a question of when you feel you have influence and whether you think you're going to have more influence outside. And unfortunately, I got to a point where I felt that I was not having the influence that I wanted to, and therefore it was time to go.

I'm curious to know, Ambassador, how much has your concern about the border changed since you left your tenure as ambassador to Mexico? When you held that post, how much were you thinking about the border immigration numbers, detentions, all that?

We thought about it a lot, for a lot of different reasons. One was clearly migration. Migration levels were at the lowest in many decades and we believed that we knew what worked — what worked was cooperating with the Mexican government that was returning people to Central America and what worked in Central America was assistance programs that reduced insecurity and increased economic opportunity and prevented kids from going into gangs. My concern at this point comes from an administration that seems disinclined to cooperate. But, also, the government of Mexico is talking about reducing their enforcement efforts and I think the two things, unfortunately, have combined to make a perfect storm where migrants think, "I'll be able to cross Mexico because this new president seems more inclined not to return me, and I may not be able to get into the United States if I don't go now." All of those are drivers north.

"My concern at this point comes from an administration that seems disinclined to cooperate."

Is Trump devoting too many resources to stemming immigration and not enough resources to the humanitarian crisis at the border?

He's devoting the wrong resources. That's what I would say. It is not a question of devoting military resources. You have to devote resources to the source countries, and we've already seen those numbers for assistance to those countries go down. You know, one day after Secretary Nielsen signs a regional compact with Central American countries to stem migration, the president announces he wants not a penny more to go to those countries, so it's also this herky-jerky — what one Mexican official called "schizophrenia" — of our policy of engaging on one day and cutting off on the next that also helps to drive this increased migration.

What do you say to people who see that cooperation as we've had it so far hasn't really delivered what the US needs, primarily calm and order at the border?

Well, I'm not sure that it was given much of a chance with this new government in Mexico because they've only been in office four months, but I would also say again that the changing focus in the US policy and the "schizophrenia," if you will, leaves everybody confused and it makes your cooperation not meaningless, but less effective.

I almost don't want to ask this but I really have to. You may have heard this over the weekend, Fox ran a banner that said "Trump cuts aid to three Mexican countries." I mean it's hard to imagine that was anything but a production mistake, but don't you think it shows that there is still a basic lack of understanding in the US about the whole region?

Well, I do think it was a production error. I don't want to read too much more into it, but I will say that I have been hearing for years — for years — from Americans along the US-Mexican border that neither Mexico City nor Washington understands the border. And I think the same is true for many Americans in terms of understanding the Northern Triangle countries or other countries in Central and Latin America. But I do think if we listened a little more, we might get it right more often than we get it wrong.