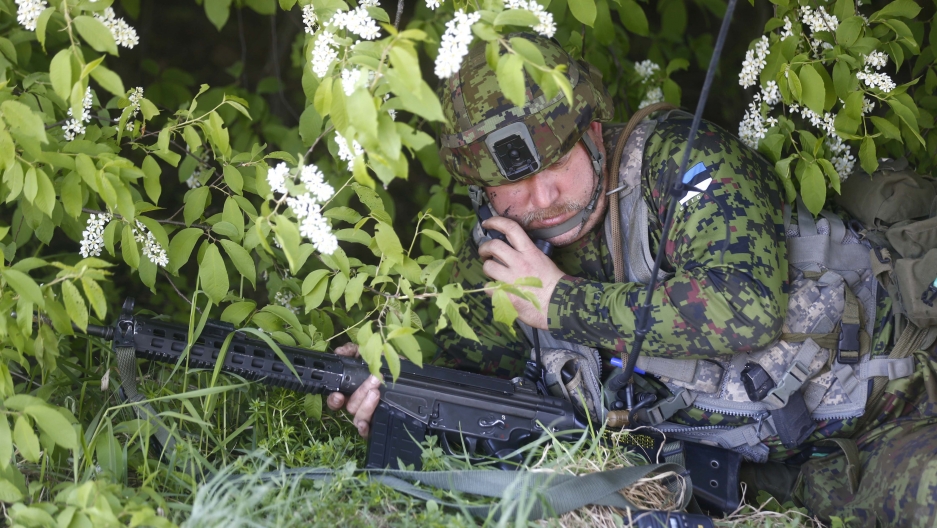 NATO celebrates its 70th anniversary this week with a meeting of foreign ministers in Washington, DC, to mark the signing of the Washington Treaty, the document that lays out the legal framework of the military alliance.

NATO Secretary General Jens Stoltenberg also met with President Donald Trump on Tuesday. Trump has been a frequent critic of the alliance, often calling out member nations for not meeting their financial commitment to NATO — a contribution of 2 percent of gross domestic product to defense spending.

Estonia, a Baltic country in northern Europe, has met or exceeded its financial commitment since 2015. Estonia — sometimes referred to as E-stonia for its reputation as a tech-savvy hub — is also home to the NATO Cooperative Cyber Defence Centre of Excellence. As a small state formerly annexed by the Soviet Union and now on the border with Russia, Estonia’s geography has been of some concern. But Jonatan Vseviov, Estonia's ambassador to the United States, says NATO’s commitment to its members is strong. Vseviov spoke with The World’s Marco Werman about collective defense and the future of the NATO alliance.

Marco Werman: First of all, what is NATO's current commitment to your country?

Jonatan Vseviov: Well, the NATO commitment, of course, is ironclad. Article 5 — collective defense — is the backbone of our security, also the backbone of European and trans-Atlantic security. We're convinced that NATO is as strong as it has ever been — actually, getting stronger every day. The decisions we've made in the past few years have put us back on the path of safeguarding European and trans-Atlantic security. We're very happy with the way things have developed in the alliance, and we're looking forward to the important meetings this week, as well as later on this year when the heads of state come together and hope to see more good decisions on collective defense.

What decision were you just referring to?

It's a number of decisions on strengthening collective defense, on making sure that we spend enough on defense, but also that we use what we spend wisely. When it comes to military infrastructure or military capabilities planning and exercises, we've done a lot and we just need to keep on going because the challenges that we face have not gone away and will not go away anytime soon.

Ambassador, you said NATO's commitment to Estonia is ironclad. You believe that, despite US President Donald Trump's critiques of the alliance?

Oh absolutely, absolutely. We believe that, and we also want to assure everybody that our commitment to NATO and Article 5 is ironclad. NATO's posture is not only composed of words. And even though sometimes words may be used deliberately, what NATO is is much more than just rhetoric. NATO is bigger than just any administration, any president, any foreign minister. NATO has been around for 70 years. It's had ups and downs. It's faced down the Soviet challenge and NATO will certainly face down future challenges, as well. Not because of partisan politics, but because of the fundamental values and interests that bring European and North American democracies together. So, I'm confident that everything that brought us together 70 years ago is still valid — even more so today than it was maybe 10, 20, 30 years ago.

"I'm confident that everything that brought us together 70 years ago is still valid — even more so today than it was maybe 10, 20, 30 years ago."

As far as Estonia goes, would you say that Estonia's biggest security threat is your neighbor, Russia?

One of the things we cannot change is geography, and the fact of the matter is that we are situated on the boundary between NATO and Russia. And the fact of life, unfortunately, also is that Russia is assertive when it comes to its foreign policy. So, we obviously take Russia very seriously. We are not anti-Russian. NATO is not anti-Russian. But NATO is absolutely committed to safeguarding and securing every square foot of its territory. That includes Estonia's territory, which just happens to be next to Russia. Russia has a major influence on our security, yes.

We saw Russia go into Crimea and annex it — Crimea being, of course, the Ukrainian territory. That happened in 2014. What would happen if Vladimir Putin tried to claw part of Estonia into Russia? Can you imagine a scenario where that might happen?

I can assure you that we, as well as our American friends and allies, as well as all of NATO, take every potential scenario very seriously, and that over the past few years, and as we speak today, we play through these scenarios at our exercises, tabletop exercises and our discussions with government officials. So, we prepare for every scenario including the most unlikely and the most serious ones. So, I am confident that nothing like this will ever happen in Estonia for as long as we keep on doing what we've been doing in the past few years.

Article 5, the collective defense clause, says that an attack on one would be responded to by all members of NATO. It's only been invoked once after 9/11. If it were used again, say at the request of Estonia in response to Russian aggression, do you believe the entire alliance, crucially the United States, would come to Estonia as help?

Yes, we do. But more importantly, we need to convince others of this. Just us believing in Article 5 is not enough, unfortunately.

What others are you specifically referring to?

Every other non-NATO nation in the world. Everybody who might entertain ideas of attacking a NATO ally. They need to be convinced that, when attacking NATO, NATO would respond. We've done a good job up until now. NATO has been attacked once as you said, and Article 5 was invoked once, that was right after 9/11. And if you remember, then NATO went to war. It went to war with its American allies, deployed in thousands to Afghanistan. I'm sure NATO would do that again if necessary. Hopefully, it will never be necessary.

There is always room for improvement. Where has NATO fallen down?

While there are a number of areas where we need to continue our work, one of them, obviously made famous by President Trump, is defense spending. Article 5 of the Washington Treaty is the collective defense clause. That is the clause that stipulates that an attack on one is an attack on all. Article 3 of the Washington Treaty, which is for some reason less famous, talks about every ally is responsible for their own defense. Defense spending is crucially important and there is room for improvement there.

Estonia, it's interesting, is one of the few NATO members that is not in arrears on defense spending for the alliance. Do you push your other member states to step it up?

Oh, yes, we do. We've done so since before the subject became as famous as it has become now.

Two percent of GDP is considered to be the minimum for us to be able to sustain sufficient military capabilities. Estonia right now is above 2 percent of GDP. Other allies are either at or moving towards the 2 percent goal.

Well, I guess we could ask the same question about every ally. The fact that we have all voluntarily joined this alliance means that we all think that we are better off with NATO. I truly believe this to be the case. Obviously, for Estonia, but also for the United States and every other ally. This is the main organization, the only military alliance that brings Western democracies together.