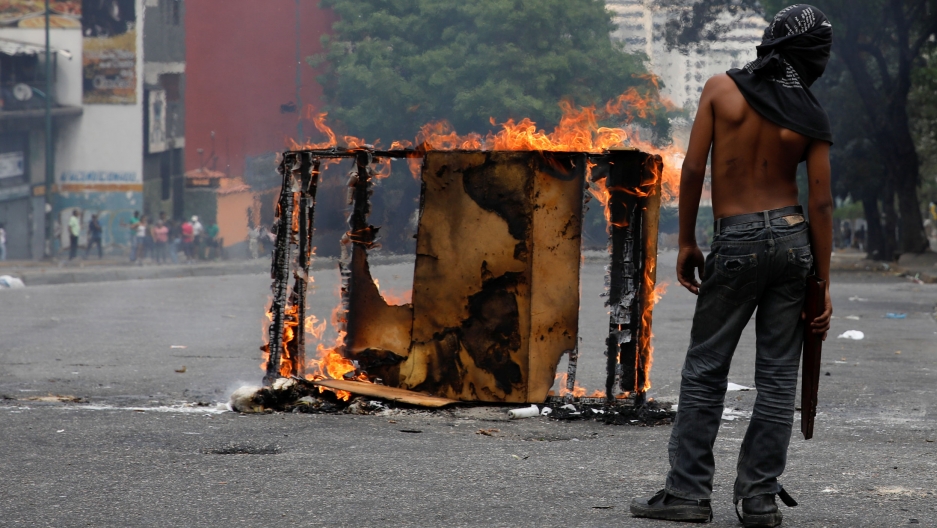 A demonstrator stands next to a burning barricade during a protest against the government of Venezuelan President Nicolás Maduro in Caracas, Venezuela, March 31, 2019.

Power outages and shortages of drinking water prompted protesters in Venezuela to set up burning barricades near the presidential palace in Caracas and in other parts of the country on Sunday.

The situation has fueled frustration with the government of President Nicolás Maduro and frayed nerves as schools and much of the nation's commerce have been interrupted by problems with public services for nearly three weeks.

Protesters, some carrying rocks and their faces covered, burned tires and tree trunks along a stretch of downtown Caracas as they demanded Maduro improve the situation.

"We're here fighting for water and power, we've gone twenty-some days without water," said Yofre Gamez, 32, an informal vendor. "They put the power on for two hours, then turn it off at night, it comes on the next day for half an hour and then it goes off again — we're tired of this."

A Reuters witness heard shots ring out as Gamez spoke.

Demonstrators reported that one woman had been injured by gunfire, which they attributed to pro-government gangs. Reuters was unable to confirm who fired the shots. 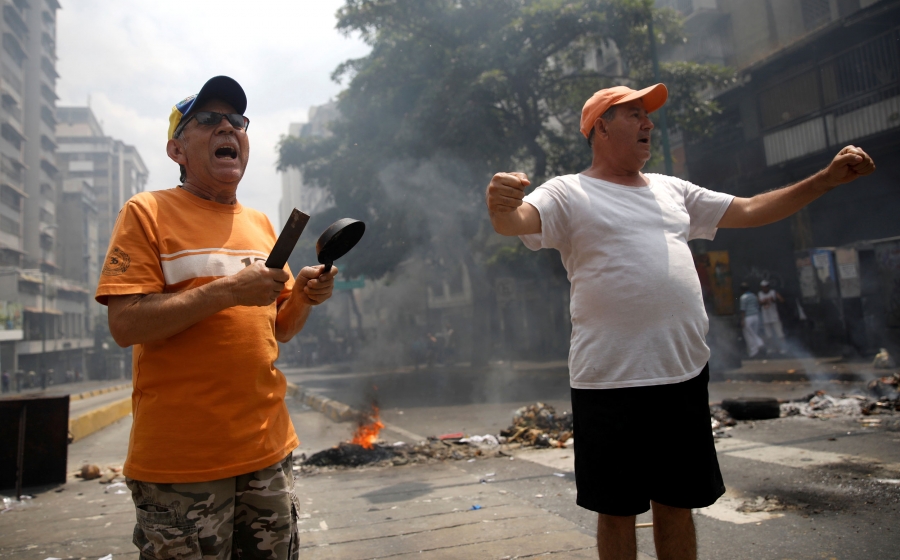 Demonstrators shout at a protest against the government of Venezuelan President Nicolás Maduro in Caracas, Venezuela March 31, 2019.

Similar protests took place in other parts of the country, including the central state of Carabobo, where demonstrators burned tires and blocked roads, according to witnesses.

Venezuela suffered a week-long nationwide blackout starting on March 7 that left hospitals unable to attend to the sick and businesses giving away perishable food before it rotted.

The power went out again on March 25 and has been intermittent since.

Maduro in a televised broadcast on Sunday night announced a 30-day plan of "load management regime to balance the process of generation and transmission with consumption," a phrase widely interpreted on social media as power rationing.

He did not offer further details on how this would work. Maduro first mentioned load management last week.

Information Minister Jorge Rodriguez said in a statement on Sunday that school activities, which were called off for most of last week, would remain suspended. Business hours will run only until 2 p.m., he said.

The government has offered a variety of explanations for the blackouts, ranging from Washington-backed cyberattacks to opposition-linked snipers causing fires at the country's main hydroelectric dam.

Critics insist it is the result of more than a decade of corruption and incompetent management of the power system, which the late socialist leader Hugo Chavez nationalized in 2007.

Opposition leader Juan Guaidó, who is recognized by most Western nations as Venezuela's legitimate head of state, has called on residents to organize at the neighborhood level to demand better services.

Guaido in January invoked the constitution to assume the interim presidency, arguing that Maduro's 2018 re-election was fraudulent and that he usurped power when he was sworn in for a second term.

Maduro calls Guaidó a puppet of the United States, which he says is seeking to force him from office through a coup.

Washington has levied crippling sanctions against Maduro's government in an effort to push him from power. He has hung on in large part thanks to the continued loyalty of top military commanders.