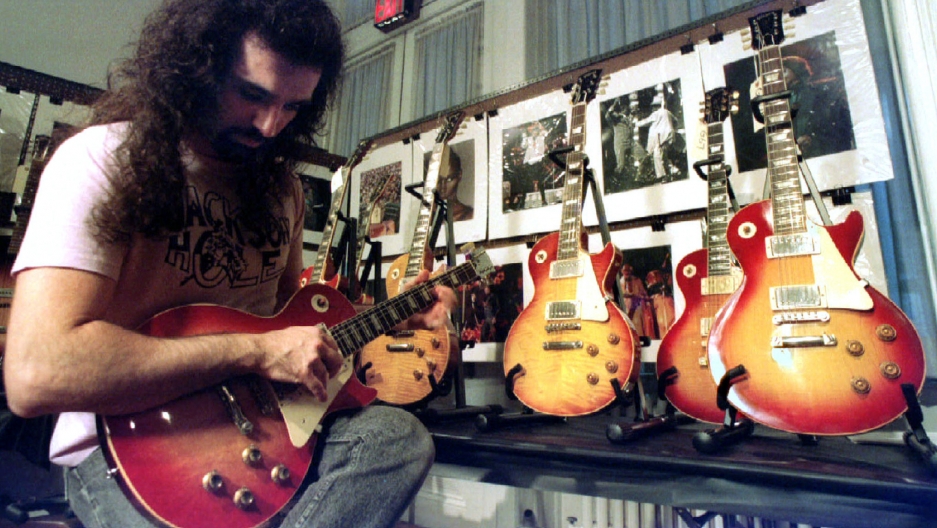 Guitar expert Lou Gatanas picks a 1960 Gibson Les Paul Sunburst electric guitar during a preview of a 60,000-item rock and roll auction in New York in 1995. The average price for the Les Paul guitars shown here was $60,000.

The birth of the electric guitar created a new genre of music — rock ‘n’ roll. But the inventors who developed the solid-body electric guitar, Leo Fender and Les Paul, could hardly have imagined the chain of events that the instrument would spark. While Fender designed the guitar for country musicians, Paul was a talented guitarist and a fan of jazz. So when rock embraced their inventions, they weren’t thrilled.

“That wasn’t the sound they wanted; they were alienated and shocked by it,” explains music journalist Ian S. Port, author of “The Birth of Loud: Leo Fender, Les Paul, and the Guitar-Pioneering Rivalry That Shaped Rock 'n' Roll.” “It was shocking to me to see how innovators sometimes can’t comprehend what effects they’re releasing into the world,” Port says.

So what led Paul and Fender — whose names would ultimately be inscribed on guitars themselves — to create the instrument? In the 1920s and 30s, Paul was a budding young musician from Wisconsin. As a teenager, he performed at a local barbecue stand, where he received a note from a member of the audience that said, as Paul later recalled: “your voice and harmonica and jokes are OK, but your guitar is not loud enough.”

Paul took that feedback home and fiddled around with his acoustic guitar, a phonograph needle, and a radio. He ultimately managed to amplify the sound his guitar produced, essentially creating the first crude version of the electric guitar.

Fender, on the other hand, didn’t play any instruments — including the guitar. Instead, his ideas and inspiration for the electric guitar came from the technical skills he had developed while fixing up radios and amplifiers for the customers who visited his small shop in California.

At first, these two innovators were friends, who shared ideas about sound, amplification, speaker design, voltage and improvements to the electric guitar. Later, when the solid-body electric guitar became a commercial product, their rivalry increased.

Meanwhile, American audiences were starting to get used to hearing rock music that was undergirded by the electric guitar. When Bob Dylan debuted his new electric sound at the Newport Folk Festival in 1965, many in the audience were having none of it. Later, in one of the most famous heckles in history, Bob Dylan was labeled “Judas” by his British fans when he whipped out an electric guitar while performing during a concert at the Free Trade Hall in Manchester, England. Some fans felt that Dylan had sold out, and that rock music was not as serious or intellectual as folk music.

But by the time Dylan went electric, the music world had changed. The Beatles, the Rolling Stones and the Beach Boys all played with electric guitars. Artists like Jimi Hendrix would prove creative with the instrument in ways that Les Paul and Leo Fender couldn’t have imagined. Eric Clapton was known for cranking up his amplifier to its maximum volume to create a loud, blues-like sound. Hair metal bands of the 1980s played around with the shapes and designs of the guitar and pushed technology to challenge the sounds and music they were able to create.

Ultimately, Port believes the greatest significance of the introduction of the electric guitar is that it empowered individual musicians in a way that had never been done before. In the 1930s and 40s, as a professional musician, you were often one of many in a band. But with rock ‘n’ roll, from Bob Dylan to Jimi Hendrix, every musician was able to create a unique identity for themselves around the music they created. The legacy left behind by Paul and Fender was an instrument that forever changed not only the sound of music but how it was created and consumed as well.