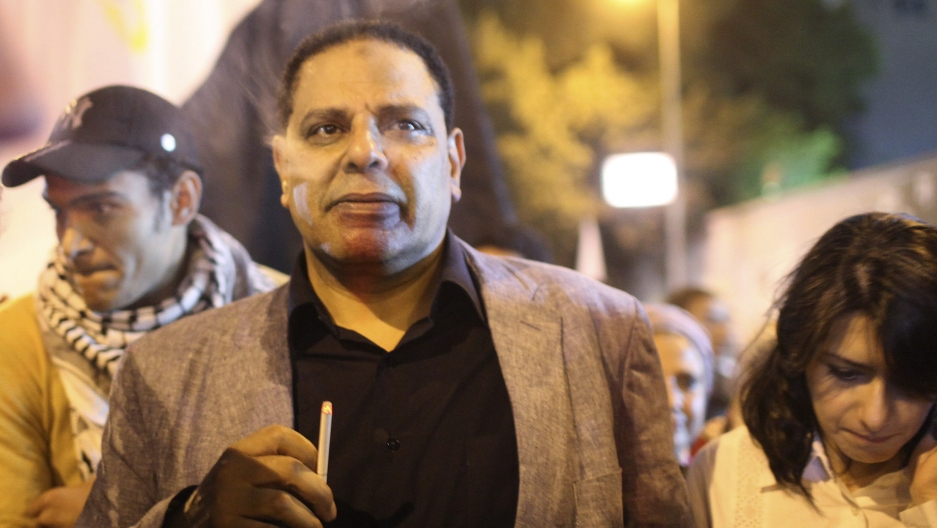 Alaa al-Aswany walks with protesters as they chant anti-government slogans in Tahrir Square in Cairo, Egypt on Nov. 27, 2012. Aswany is being sued by the Egyptian government and now lives in New York City.

Alaa al-Aswany spent every day in Tahrir Square leading up to the fall of Hosni Mubarak. His 2002 novel, "The Yacoubian Building" is set in downtown Cairo and tells the story of residents of an actual building in Cairo. The novel paints a picture of a Cairo where only the "corrupted and corruptible" can succeed.

But now Aswany is in the news again. Aswany says President Abdel Fattah al-Sisi's government is suing him for "insulting the presidency." He spoke to The World's Marco Werman from his home in New York City, where he has resided since facing threats from Sisi's government.

Marco Werman: Why are you getting sued? What did you write that angered authorities in Cairo?

Alaa al-Aswany: Well, they have been angry with me for five years now. The first week that Mr. Sisi became the president, I was banned from any TV appearance. Then, I was banned from writing in the Egyptian newspapers and banned from organizing my weekly seminar that I have been organizing for 20 years. So, it's not new but this is an escalation. They say that I insulted the presidency and that I insulted the state institutions. These kinds of accusations don't mean anything legally but they are used over and over to punish anybody who criticizes the president.

Are they saying you're just generally insulting the president or is there one specific insult or critique that they're singling out?

No, they are using my latest novel. It was about the revolution and of course, I described what I saw, how the authorities treated the revolutionary youth, how they were killed and how they were sexually abused by the officers. This is one reason. The problem is, now, anybody who criticizes the president's policy will be considered somebody who was insulting the president.

Related: This Egyptian musician's passport was revoked for his political songs. He still can't wait to go home again.

For five years now you've had hassles with the Sisi government in Egypt. Five years takes us back to the military coup in 2013. I want to go back before that, to your own background. You grew up in Egypt in the '70s, your dad was a writer and you became a dentist and a part-time writer until your book "The Yacoubian Building" took off in 2002 and became an international bestseller. Remind us what that book was about and how it transformed your life.

It was a phenomenon — translated to 77 languages and millions of copies sold. I used the place as the main character. The Yacoubian building is a real building which still exists in downtown Cairo. I tried to present my characters, which are the tenants inside the building, to reflect all the social and political problems of the time, but it's basically fiction.

So that was 2002. I imagine the characters in "The Yacoubian Building" could have been some of the people in the streets of Cairo during the Arab Spring protests that you took part in. I know a lot of people hoped those protests would be a turning point for Egypt. What were your hopes when you were demonstrating?

After Sisi came to power in 2013 did you continue to write critically about the government?

Yeah, just a few weeks before getting banned. I wrote, for example, the elections through which Sisi arrived to power were not free elections or fair elections. So, I was banned. It was too much for the regime and I was banned from everything.

How did you end up in New York? Why did you leave Egypt?

The American universities always have a place for visiting professors of creative writing and writers in residence. I had invitations a long time ago, but I didn't find any reason to leave Egypt. So, after being banned from everything I stayed in Egypt physically, but I did nothing. So I began to accept the invitations. But every time I go back to Egypt, they give me a very hard time in the airport. Every time I was detained for two hours. It was terrible, but I insisted on going back for two or three months and then back to America.

So what's next for this lawsuit? What do you have to do now?

A military case in Egypt is totally decided by the president. Even if I go or send my lawyer, it's totally useless to participate in something like this because in the end, the president will decide the sentence.

The interview was edited and condensed for clarity.