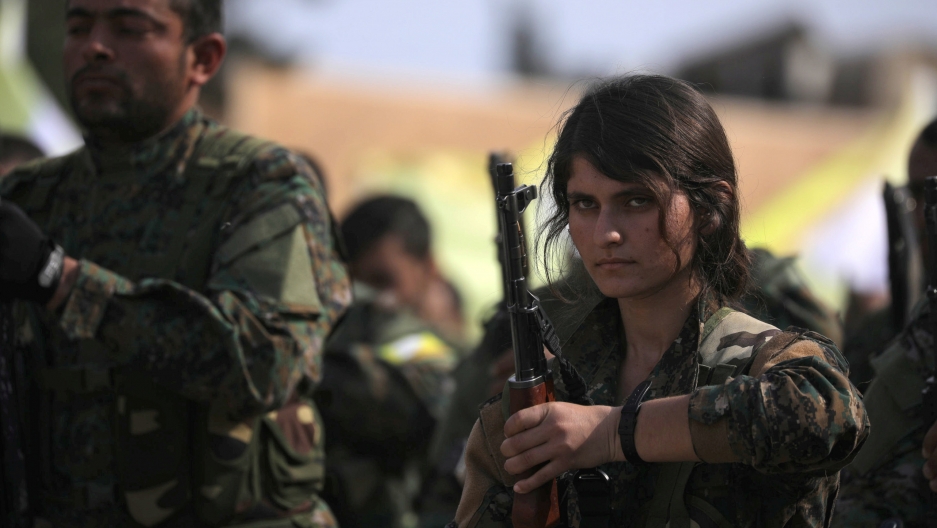 A fighter of Syrian Democratic Forces holds her weapon as SDF announces the destruction of ISIS control of land in eastern Syria, at al-Omar oil field in Deir Al Zor, Syria, March 23, 2019.

When ISIS swept through western Iraq in 2014, pillaging communities of the Yazidi religious minority — executing men and forcing women into sex slavery — Pari Ibrahim lost 19 female relatives. She has only been reunited with two.

Founder of the Free Yezidi Foundation, Ibrahim launched a campaign to breathe life back into the Yazidi heartlands of Iraq. That means creating jobs and rebuilding homes, but also letting victims have their day in court and seeing ISIS leaders jailed for the brutality they unleashed.

“The Yazidi community deserves a Nuremberg tribunal because of how much they suffered,” Ibrahim told The World, referencing the war crimes trials of Nazi leaders after World War II. 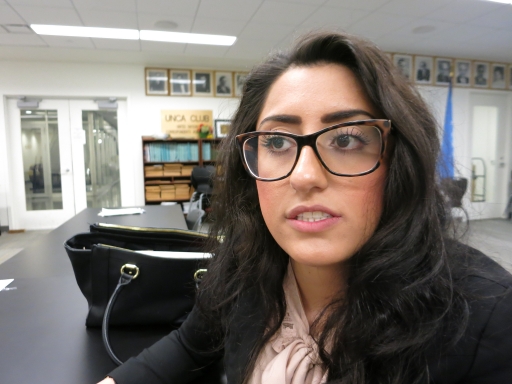 Tens of thousands of former ISIS fighters, local and foreign — and their families — are now locked up in camps and prisons across northern Syria. Many have committed heinous crimes and could do so again. But the evidence against them is often flimsy.

What should happen to them?

This question has, so far, stumped politicians and diplomats. Almost everyone agrees that the perpetrators of mass rape, kidnapping and murder under the ISIS caliphate’s brief existence should face justice. How that comes about is a tougher nut to crack.

At its peak, ISIS controlled a swathe of Syria and Iraq that was almost the size of Britain. This month, US-backed Syrian Democratic Forces declared the group's "total elimination" after its final desperate stand in the east Syrian hamlet of Baghuz.

Related: ISIS militants continue to surrender, but US military warns of a resurgence

This week, Kurdish officials, who have thousands of ISIS suspects locked up in overcrowded jails and sprawling camps, asked the world for help.

“We can’t put up with this burden alone."

“We can’t put up with this burden alone,” Abdulkerim Umer, a Kurdish official, told the Associated Press.

The Kurdish-led administration that runs much of northern Syria called for an international tribunal to be set up in their region to try the thousands of suspected ISIS members rounded up in the nearly five-year anti-ISIS campaign.

There has been little in the way of a response. The Trump administration, which is openly hostile to the world’s permanent war crimes tribunal, the International Criminal Court, says foreign ISIS fighters should be repatriated to their home countries and then prosecuted.

But many European nations are loath to bring back violent extremists and risk leveling charges that do not stick. In one case, the UK stripped British teenage ISIS member Shamima Begum of her citizenship rather than let her back home.

Related: When an American flees to join ISIS, should they be allowed to come home?

United Nations spokesperson Stéphane Dujarric said there should be no “impunity for crimes committed by Daesh in Iraq and Syria,” using an alternate name for ISIS. But he had nothing to add about any “other possible international tribunals.”

Global efforts to manage ISIS detainees were a “bit of a mess,” he told The World.

The Kurdish “cry for help” is falling on deaf ears because members of the US-led anti-ISIS coalition are not stepping up to the plate, according to Balkees Jarrah, war crimes expert with Human Rights Watch.

“We see only a flawed, piecemeal approach and a flagrant absence of a strategy to credibly investigate and prosecute ISIS members,” Jarrah told The World.

“Key members of the coalition are repeating the mantra that foreign ISIS members should be tried locally, but the coalition hasn’t assisted the authorities in northern Syria to develop their capacity to make this happen.”

“Key members of the coalition are repeating the mantra that foreign ISIS members should be tried locally, but the coalition hasn’t assisted the authorities in northern Syria to develop their capacity to make this happen.”

Those trials of ISIS detainees that have occurred are not satisfactory, Jarrah said. Iraqi courts have rushed through cases, leading to speedy convictions and many death sentences — hardly examples of due process.

The same goes for courts in Kurdish-run parts of Syria, where ISIS defendants often appear without defense lawyers and lack the right of appeal. Kurdish-run courts tend to hand down lighter sentences to repentant ISIS fighters, conscious of the need to appear fair to the Arab populations that now live under Kurdish control.

Such leniency is not uncommon. South Africa’s Truth and Reconciliation Commission granted amnesties to some people who owned up to committing human rights abuses under apartheid rule.

In both Iraq and Syria, ISIS detainees are typically tried under anti-terror laws, which punish membership of an organization. They are easier cases to prosecute, but the victims of mass rape and kidnappings don’t get their day in court, Jarrah added.

Christian Wenaweser, Liechtenstein’s UN envoy, has long campaigned for those behind ISIS-style atrocities to face justice. Ideally, ISIS leaders like Abu Bakr al-Baghdadi would face prosecution in the ICC, a ready-to-go court in The Hague, Wenaweser told The World.

But the ICC has no jurisdiction there because Iraq and Syria are not members. The UN Security Council can refer the case to the ICC, but heavyweight members like Russia and China are against such a move, which would also open up Syria's pro-government and other forces to scrutiny.

A UN-backed special tribunal, like those created in the 1990s to handle Rwanda’s genocide and the atrocities committed as Yugoslavia tore apart, also looks like a longshot right now, Wenaweser added.

“I don’t think it’s politically very likely that we get together and create a fully-fledged international tribunal for the purpose of prosecuting ISIS affiliates in Syria. ... It’s politically difficult, financially costly and a clumsy and cumbersome process to set up.”

“I don’t think it’s politically very likely that we get together and create a fully-fledged international tribunal for the purpose of prosecuting ISIS affiliates in Syria,” Wenaweser said. “It’s politically difficult, financially costly and a clumsy and cumbersome process to set up.”

It’s better to “work with what we have rather than create new things,” he added.

A special ISIS court presents other problems, he added. While it may put some extremists behind bars, it would ignore forces loyal to Syrian President Bashar al-Assad and other armed groups who have fought dirty during Syria’s civil war.

In 2016, the UN General Assembly created a team called the International, Impartial and Independent Mechanism, or IIIM, to gather evidence of atrocities in Syria, such as gas attacks by Assad’s generals and ISIS rounding up and executing gay people, members of religious minorities, journalists and other dissidents.

Related: Looking back on the death of James Foley

But the IIIM has a big shortcoming. It can build case files and share evidence with other judicial systems, but has no judges or court to hold trials. 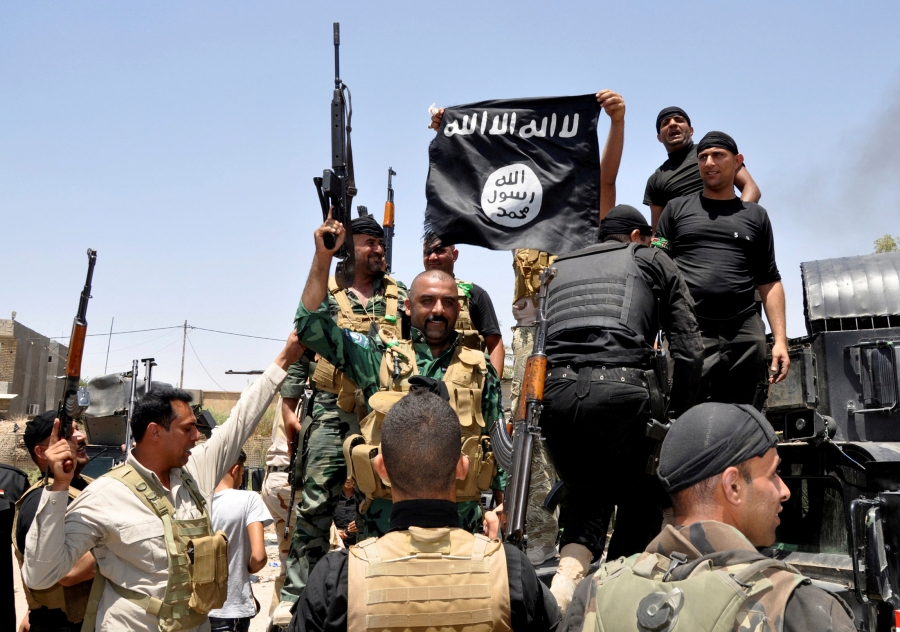 Iraqi security forces pull down a flag belonging to ISIS during a patrol in the town of Dalli Abbas in Diyala province, Iraq, June 30, 2014.

In Iraq, the UN has deployed an Investigative Team for Accountability of Daesh, or UNITAD, to support ISIS prosecutions there. This month, together with Iraqi officials, it finished exhuming its first Yazidi mass grave, in the Sinjar region.

For Wenaweser and Jarrah, the solution to the ISIS legal headache will likely involve cobbling together the UN-led probes with prosecuting authorities in Iraq and Kurdish-held Syria, as well as those in Europe and North America.

“The international community and key actors in Syria and Iraq need to come together and develop a coherent response that would credibly bring ISIS members to account, and that doesn’t exist at the moment,” Jarrah said.

“The international community and key actors in Syria and Iraq need to come together and develop a coherent response that would credibly bring ISIS members to account, and that doesn’t exist at the moment,” Jarrah said.

This may be the only game in town, but it offers little comfort to those like Ibrahim.

“The world needs to invest so that UN investigations are more than just some documents left sitting in a library. There has to be action,” Ibrahim said.