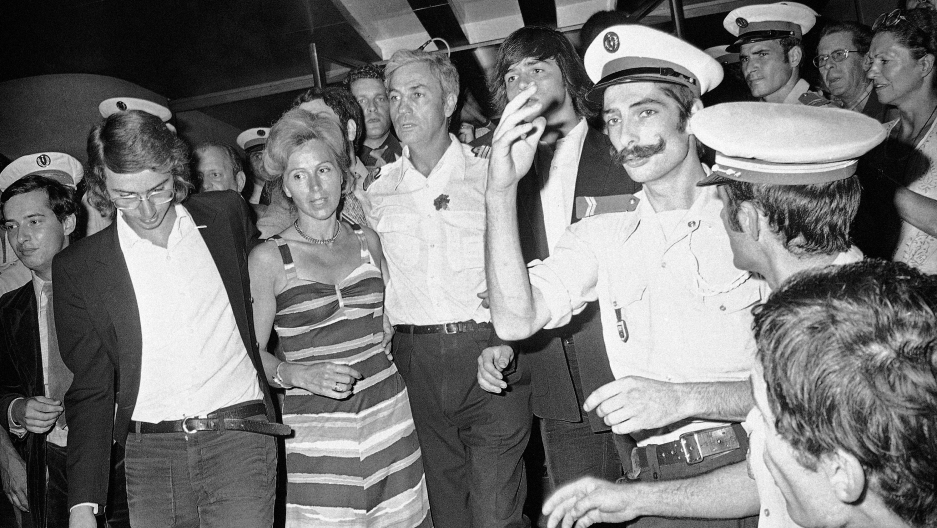 Head pilot Michel Bacos is reunited with his wife and son at Orly Airport in Paris on July 5, 1976, as the 12-member crew of the hijacked Air France Airbus jetliner and 14 passengers return home from Tel Aviv after a week-long stay at Entebbe Airport in Uganda.

Michel Bacos, a French pilot who refused to abandon the Jewish passengers of a hijacked flight that was diverted to Entebbe in Uganda in 1976, died Tuesday in Nice, France. He was 95.

Bacos was the pilot of Air France Flight 139, which was hijacked June 27, 1976, by two Palestinian and two German terrorists. The flight was en route to Paris from Tel Aviv, Israel. The terrorists boarded the plane at a stopover in Athens and held the captain and crew at gunpoint. Bacos rerouted the flight, first to Benghazi, Libya, and then to Entebbe.

The terrorists were members of the Popular Front for the Liberation of Palestine (PFLP) and the Revolutionary Cells and were supported by Uganda's president, Idi Amin, who visited the hostages on a daily basis at Entebbe.

Passengers, the crew and Bacos were rescued after an Israeli raid on July 4, 1976.

Benny Davidson was 13 when he boarded that plane on June 27, 1976, with his family. He joined The World on Friday to talk about how he remembers Bacos and his heroism during that crisis more than 40 years ago.

Marco Werman: You were one of those hostages, Benny. I remember this whole episode really well. In 1976, we'd have been about the same age. When you heard the news about Capt. Bacos this week, what were your thoughts?

Benny Davidson: We're very sad to hear the news. We have a small Whatsapp group of the kids of Entebbe; we've maintained contact through the years. One of the group informed us regretfully that Michel passed away. We knew that he was not well, but still, even at age 95, such a leader and magnificent person passing away brings back a lot of memories that the kids of Entebbe share of him. 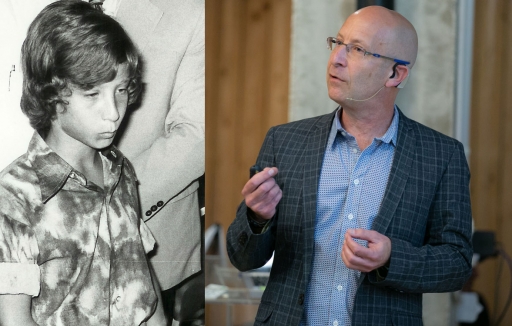 "Michel took over immediately as a real captain and as a real commander."

What do you recall today, and how does Michel Bacos figure into those memories?

I actually remember almost every minute of that horrible week. It took me 40 years to start talking about it. Michel was a tall person and a very handsome person, but his inner personality and his bravery and his leadership were simply out of this world. Michel took over immediately as a real captain and as a real commander. He saw that everybody got their needs met with blankets, chairs, mattresses and food during that week. Some people became ill and he saw to it that the doctors would arrive and medicines would be supplied. He took care of that with the terrorists. He was all over the place taking care of us, and he was a real role model not just for the kids, but also, I think, for the grown-ups.

There was a documentary that came out in 2000 called "Operation Thunderbolt." In it, Shimon Peres, who was Israeli defense minister at the time, talked about how the terrorists separated Jewish from non-Jewish passengers on the plane: "This was the most emotional moment, in my own consideration. I said, 'My God, we're going to have a small Holocaust in this plane.'"

Do you remember that moment where the passengers were being separated?

Yes, definitely. The separation — or what you call "separation" we call "selection" — and selection in Jewish heritage brings back a lot of memories. It was 1976, 30-odd-something years after World War II and that selection was being made again between Jews, Israelis and the rest of the world. As a kid, I remembered the selection stories from the Holocaust. Most of my mother's family was in Poland in the Holocaust. I saw on the faces of the grown-ups that something meaningful was happening. You know, in the Jewish heritage and in the Jewish Bible there is a very old saying that the Israeli people, the Jewish people are the chosen people. During that selection, we were the chosen ones to die.

"During that selection, we were the chosen ones to die."

Not the best sense of chosen by any means.

Yes, actually in the wrong sense, but it is very powerful. We understood what's coming. It was quite grave. Michel Bacos on Wednesday, when they started releasing the foreigners, you know, when the Israelis and the Jews called the others "the foreigners," he declined. It was a great moment, and he said to the terrorists bluntly, "I'm staying until the last of them," and he approached his crew and told them, "Listen, this is a very grave decision. You can all go home, but you need to decide." He didn't force them to stay and he let them decide by themselves. Everybody, to the last of them, stayed with their captain and their commander and took care of us. That was extremely impressive.

He never doubted. You know, I spoke with him. He visited Israel many times over the last 43 years, and he said, "I didn't even doubt it for a minute. I still had roughly 100 passengers under my control and command and I'm not leaving them behind without knowing what's happening with them." He did it, you know, with a small smile on his face, not with a grave seriousness on his face.

That really does seem to be the big lesson from Michel Bacos. Is there anything else you'd like to add to the story of that day?

So, I was traveling with a family, both my parents and my older brother Ron, and the travel plan was supposed to be flying from Tel Aiv to Paris and then we should have been exchanging planes and continuing to New York and from there, the plan was to do a coast-to-coast trip from the East Coast to the West Coast in the United States over three weeks or a month. That was my bar mitzvah present.

When we got to Ben Gurion Airport in 1976, we saw that the flight was not Tel Aviv to Paris directly, but from Tel Aviv to Athens, Greece, then to Paris. Nevertheless, of course, we boarded it and the terrorists boarded the plane in Athens. Five minutes after takeoff in Athens, all hell broke loose, and the story changed.

We got back to Israel 10 days after the hijacking. We boarded another plane, this time direct to New York. My parents' decision was that we should continue with life as planned as soon as possible. Ten days is all it took for the Israeli internal office to issue us new passports. For a month, we did the same coast-to-coast trip that was originally planned for my bar mitzvah. I think that was a great lesson for me as a kid to learn of how to overcome terror. I call it a "Tylenol against terror." I'm not a terror fighter, but if you continue with life and continue with your original plans, that allows you to become mentally safe and healthy. That's my message.

"If you continue with life and continue with your original plans, that allows you to become mentally safe and healthy. That's my message."