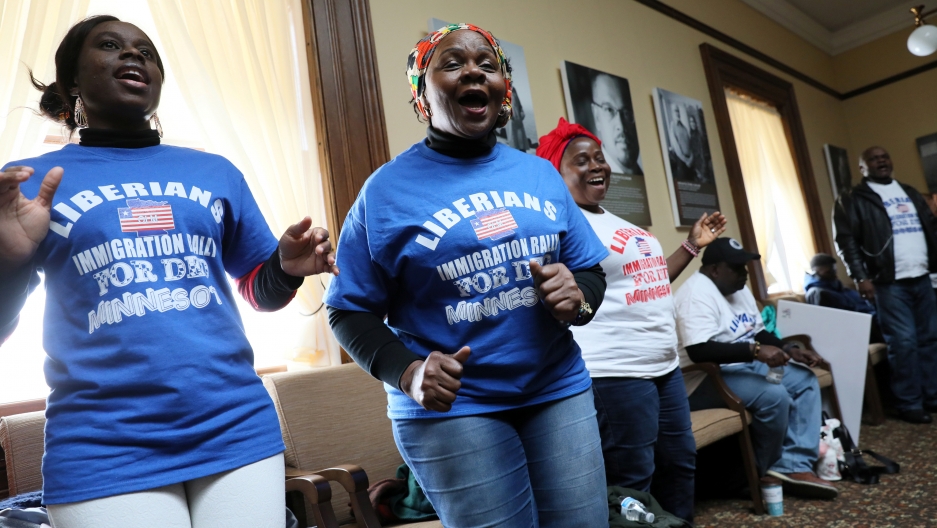 Liberian activists sing and dance prior to their Deferred Enforced Departure immigration status rally at the Minnesota State Capitol in St. Paul, Minnesota, Feb. 22, 2019. DED was extended just days before a March 31 deadline would have left potentially thousands undocumented.

This week, Magdalene Menyongar, a Liberian immigrant who has legally resided in the US for 24 years, came within three days of becoming undocumented overnight. Then, on Thursday, US President Donald Trump issued an 11th hour reprieve, granting a one-year extension of a temporary program for Liberians he previously said would end March 31.

After months of worry, Menyongar said she finally felt a sense of relief.

“We can sleep,” she said Thursday in her Maple Grove, Minnesota, home. 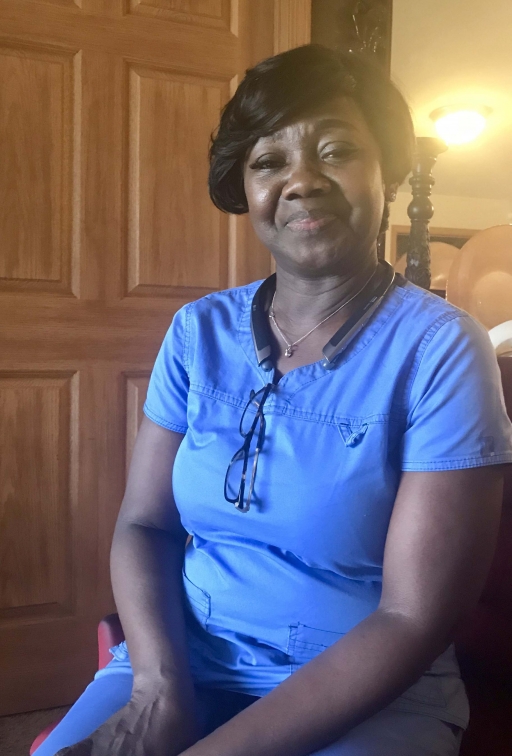 Magdalene Menyongar sits in her Maple Grove home on March 28, 2019, smiling after receiving news that Deferred Enforced Departure, which was set to expire March 31, had been extended through March 2020. She is one of the many Liberians living with DED status in the United States.

Menyongar, 48, is one of the up to 4,000 Liberians residing in the US with Deferred Enforced Departure status. The program, which allows holders to live and work in the US, began in 2007, when then-President George W. Bush granted it as an administrative stay of removal after their legal protection under another program, Temporary Protected Status, expired. DED has since been extended roughly every 18 months by the sitting president.

In March 2018, Trump announced he would not renew the status for Liberians, many of whom have been in the US legally for decades after fleeing Liberia’s devastating civil war.

That announcement was part of a broader effort by the Trump administration to cancel long-standing programs that allowed certain immigrants to temporarily reside in the US — such as TPS and Deferred Action for Childhood Arrivals, or DACA. Unlike DED, the other two programs have been kept alive by court orders. But the impending end of DED for Liberians was the closest the Trump administration came to rendering an entire class of immigrants suddenly undocumented.

Had the program expired, it could have left thousands of Liberian DED holders with only two options: Stay in the US without papers and go underground, or leave their families behind and return to Liberia, a country still reeling from conflict. After calls by lawmakers and activists, the White House extended the “wind-down period” for the status. It now plans to sunset DED in March 2020.

Meyongar, a certified nursing assistant, has a daughter in high school — a US citizen. In a few weeks, Meyongar will get to see her go to prom. Next year, she hopes to be here to see her graduate.

"[My daughter's] on spring break, but she’s been worried about this — ‘What’s going to happen to my mom?’”

“My daughter just left the house, she’s on spring break, but she’s been worried about this — ‘What’s going to happen to my mom?’” Menyongar said.

Although she no longer has a sense of immediate anxiety, she knows this DED extension is not a permanent fix. It offers no real pathway for Liberians to obtain permanent residency in the United States.

“It’s one year, but we got work to do,” Menyongar said.

Related: This immigration bill won't pass but is still a 'major win'

The fight for a legislative fix

Liberian DED holders are longtime US residents, with American-born children and jobs. Advocates say leaving them in limbo — or worse, ending their status — breaks up families and causes economic hardship.

“We’ve taken folks to DC several times so that they can share their stories with lawmakers and push for a legislative fix because, obviously, continuing to ask for extensions just brings us back to the same spot every year of them needing an extension again,” said Abena Abraham, one of the trip organizers and co-founders of the Black Immigrant Collective. “So we ultimately need to have a permanent solution to the problem.”

Just days before DED was set to expire, Minnesota Democratic Rep. Dean Phillips and Pennsylvania Republican Rep. Brian Fitzpatrick introduced the bipartisan Protect Our Liberian Community Act, which would move DED holders to TPS, and provide them legal status for another three years. If passed, the bill would buy more time for a permanent solution to be found.

"Folks kind of understand that people being here over almost 30 years — there’s nothing temporary about that."

“We have both Republicans and Democrats who support signing a permanent solution to this issue,” Abraham said. “Folks kind of understand that people being here over almost 30 years — there’s nothing temporary about that.”

Minnesota and Pennsylvania are home to several cities with large Liberian American populations. Democratic Rep. Ilhan Omar traveled back to Minneapolis this week to call for legal protections, speaking at a local senior care center where more than 100 staff members are DED holders.

Many Liberians work in the healthcare field in Minnesota, filling jobs primarily in nursing homes. With shortages in the field already, a loss of Liberian DED workers would be devastating for their employers and patients.

Earlier this month, House Democrats introduced HR-6, the Dream and Promise Act, which would allow for an estimated 429,000 immigrants under TPS and DED to apply for permanent legal status. Few expect the bill to pass as is, but representatives are collecting co-sponsors in the House.

Liberia’s historic ties to America are unique, and some believe the solution to Liberian nationals in the US should be as well.

In 1822, the American Colonization Society, headed by white political and religious leaders, founded Liberia to Christianize Africans and rid America of what they viewed as the country's “Negro problem”: the growing population of free-born and formerly enslaved African Americans, who were highly encouraged to resettle in Liberia.

The African American settlers to Liberia declared independence in 1847, but recreated in Liberia the system they fled in America, oppressing and discriminating against the indigenous African majority. They called themselves Americo-Liberians and comprised less than five percent of the population, but possessed the country's wealth and power. They ruled for more than 130 years. An indigenous Liberian faction led by Samuel K. Doe toppled their oligarchy in a violent 1980 coup. The monumental shift in power created political instability, leading to devastating civil wars.

Jeannette Jones, an associate professor of history and ethnic studies at the University of Nebraska, explains that all of those events have contributed to instability in the country.

“There’s certain historical events that caused people to be refugees and to be immigrants ..."

“There’s certain historical events that caused people to be refugees and to be immigrants, and this one is predicated on the relationship between the United States, African Americans, the history and legacy of the slave trade and of course the region that becomes Liberia,” Jones said.

The first Liberian civil war began in 1989, and the second civil war started in 1999 and lasted until 2003. More than 200,000 were killed and over 1 million Liberians were displaced. Many of those fleeing came to the US.

“Liberians who come to the US whether or not they’re descendants of the so-called Americo-Liberians or not, they’re tied up in that discussion, there’s no way you can detach them from that history that has a legacy today,” Jones said.

In Trump’s Thursday memorandum extending DED protections, the relationship between Liberia and America is described as a “bilateral diplomatic partnership” to establish democracy in Africa.

“You can’t say, ‘oh well, they were never our formal colony so therefore we don’t have any duty towards the Liberians,’” Jones said.

Those unique ties are another factor that must be taken into account, Jones believes.

“I’m not saying other people don’t have credible claims from other nations that are on the TPS list or the DED, but this particular relationship is very different than the others. I think if we don’t talk about the historical roots of that relationship in a real way, we miss that,” she said.

For Meyongar, the justification goes beyond America’s relationship with Liberia.

“When you have lived in a country for 20-plus years, you pay your taxes and you’re a law-abiding citizen, you expect whatever everybody else has."

“When you have lived in a country for 20-plus years, you pay your taxes and you’re a law-abiding citizen, you expect whatever everybody else has," she said. “You don’t expect to be pushed back to the line all the time.”

Ultimately, she says, the goal is to make this DED extension the last — and replace it with a status that's no longer temporary.

“Our message is 'permanent resident, pathway to citizenship,'” Meyonger said. “It’s about time the American government make us residents here. We have worked for this.”