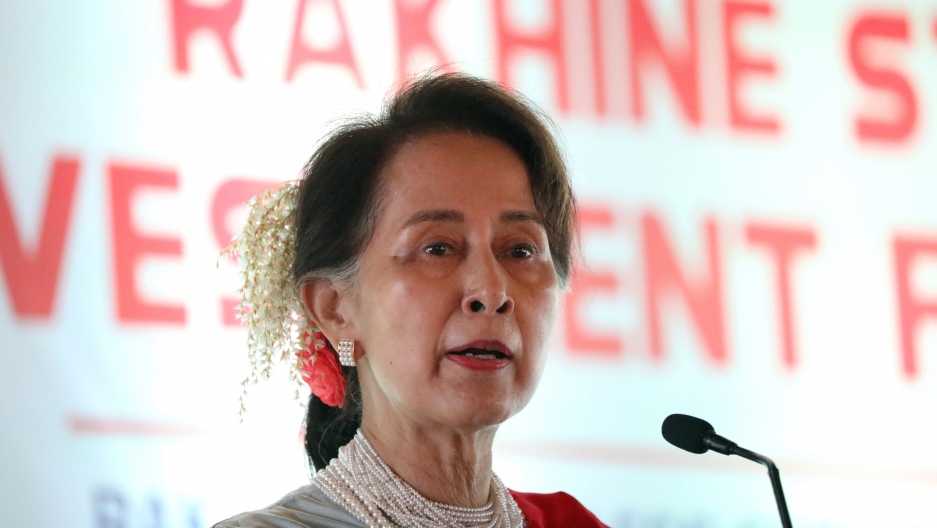 Aung San Suu Kyi — Myanmar’s most famous person, probably ever — recently mounted a podium and made an exceptionally difficult pitch.

Please, she told a roomful of foreign investors. Invest in Rakhine.

Rakhine is a coastal area, roughly the size of Switzerland, which stretches along Myanmar’s western coastline. It’s jungly, humid and prone to frequent power outages. The average person living in Rakhine pulls in only $500 per year, an amount lower than most estimates for North Korea.

But that’s hardly the sole reason Aung San Suu Kyi, the nation’s state councilor and political leader, is struggling to lure global investment to Rakhine. It doesn’t help her case that The New York Times mentions Rakhine alongside Sarajevo and Darfur, calling it a “global byword for ethnic cleansing.”

Rakhine is notorious as the homeland of the Rohingya, a Muslim minority suffering both apartheid camps and military-led purges that have driven hundreds of thousands into neighboring Bangladesh, where most refugees live in crowded camps.

And then there are the rebels.

Rakhine is also the homeland of the Arakan people, a largely Buddhist ethnicity. Though most people in the area are Arakan, they’re a minority compared to the nation’s largest ethnic group, the Burmese.

Among the Arakan are revolutionaries fed up with government misrule and waging an insurgency to seize control of the region.

Related: A spoken word poet in Myanmar speaks out against hate and injustice

In recent months, this rebellion has revved up. The roughly 7,000-strong Arakan Army has staged roadside bomb attacks and gunned down police — all while taunting officials on social media.

One typical video features a female rebel firing an assault rifle and shouting that she is “coming to take our country back!”

Images of insurgents, UN reports of ethnic cleansing — this is exactly the sort of thing that tends to pop up when Googling the word “Rakhine.” But Aung San Suu Kyi, in a late February speech at a foreign investors’ summit in Rakhine, suggested these horrors are blown out of proportion.

“For too long, the international community’s attention has been focused narrowly on negative aspects … rather than on the panoramic picture that shows the immense potential of this state for peace and prosperity.”

“For too long, the international community’s attention has been focused narrowly on negative aspects … rather than on the panoramic picture,” she said, “that shows the immense potential of this state for peace and prosperity.”

The region, she said, is simply a “latecomer to the development scene” that is nevertheless “brimming with opportunities and warm and friendly people, all eager to be a part of the development adventure.”

Aung San Suu Kyi touts the region’s pristine beach zone as “scintillating” with tourist potential. She highlights the allure of Mrauk U, a series of grand, Buddhist temples built by the Arakan people more than five centuries ago.

#Mrauk U is a small town in the southwest of Mrauk U but it was once a Kingdom of Arakan from 15 to 18 century. During Mrauk U Kingdom period, hundred of Buddhist religious monuments were built every corners of the town. Nowadays it becomes one the most tourist attraction site. pic.twitter.com/h8bOpZLkzA

Those beaches are located more than 200 miles from the fighting and appear quite safe.

As for the temples? They’re so close to the fighting that, as two British tourists walked through the ruins recently, they were able to record distant sounds of staccato gunfire.

We left #Mrauku in #Myanmar yesterday, the #bombing and #attacks started yesterday night after we had left.
The DAY BEFORE we left, this happened when we went to explore the temples. 1/2 pic.twitter.com/2WkYJQ3J6D

Despite all of this chaos, Myanmar’s government claims to have secured “expressions of interest” toward nearly $5 billion worth of investments in Rakhine. But a huge portion of that will flow into a sector that dominates the region’s economy: offshore natural gas.

Gas is what compels outsiders — firms from China and South Korea as well as America’s Chevron — to invest in drills or pipelines off Rakhine’s shoreline. Little of this extracted wealth, however, ends up funding the schools or clinics that locals so desperately need.

“The local people regard offshore gas as a curse, not a blessing.”

“The local people regard offshore gas as a curse, not a blessing,” said Vicky Bowman, formerly a British ambassador to Myanmar and now the head of an organization called the Centre for Responsible Business.

These feelings are tapped by the rebels who proclaim that “the invading Burmese have brought only increasing military oppression, cultural destruction and exploitation to the Arakan people.”

The insurgents’ commander — a bespectacled, 40-year-old named Maj. Gen. Twan Mrat Naing — has explicitly spoken of reviving Arakan greatness, a past era exemplified by those ancient temples. This lost kingdom of Arakan was conquered by a Burmese-run dynasty in the late 1700s and, fewer than 50 years later, overrun by the British Empire.

“Our Arakan kingdom was very wealthy … but under Burmese rule,” he said, “we became very poor, and lost everything we had.”

Myanmar’s government will insist it wants to uplift the Rakhine people by urging wealthy foreigners to open resorts, clothing factories and shrimp farms in Rakhine. But Bowman said investors inevitably wonder why they’d pour money into a zone prone to unrest rather than a more secure part of Myanmar — or a more peaceful country in the region.

“The people who are looking to invest in Rakhine are doing it because … they have no choice,” she said. “If they want to be investing in gas in Myanmar, that’s the place to be.”

Warfare between security forces and Arakan insurgents is unlikely to reach the gas rigs. They’re separated from the current fighting by more than 100 miles of rough terrain and bumpy roads.

But it will almost certainly derail Aung San Suu Kyi’s hopes of transforming Mrauk U — the seat of the old Arakan kingdom — into a major tourist site. Though hard to verify, various clips on Twitter appear to show bullet marks on the ruins and locals huddling nearby, seeking refuge from the violence.

Correction: An earlier version of this story misstated the income of the average person living in Rakhine.