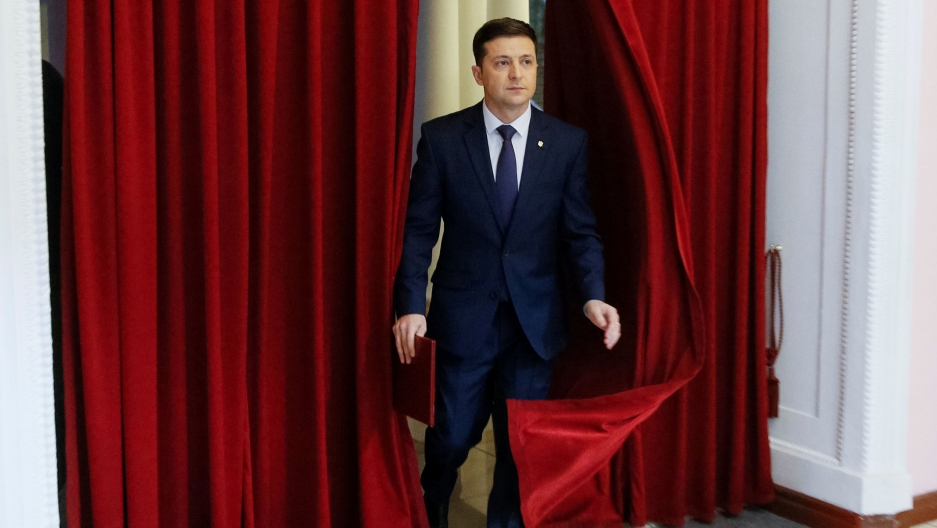 Volodymyr Zelenskiy, comic actor and candidate in the upcoming presidential election, takes part in a production of the Servant of the People television series in Ukraine.

The favorite in Ukraine's first round vote on Sunday is Volodymyr Zelenskiy, a political novice who plays a fictitious Ukrainian president in a popular TV series and who, in real life, has tapped into an anti-establishment mood among voters.

Many opinion polls put the serving president, Petro Poroshenko, in second place, a result that would set up a run-off between him and Zelenskiy next month, with a hard-to-predict final outcome.

Former Prime Minister Yulia Tymoshenko is also in the running and could scrape into the second round at Poroshenko's expense.

"Zelenskiy will probably be in the second round, up against either Poroshenko or Tymoshenko, which means that it's going to be a contest between the new and the old," said Robert Brinkley, chair of the think tank Chatham House's Ukraine Forum.

Ukrainians must then decide whether they are so fed up with the existing politicians "that they'll vote in a complete novice and outsider, or will their cautious instincts ... reassert themselves and they'll say we had better go with the devil we know rather than somebody completely unknown," he said.

With Zelenskiy's insurgent run for the presidency, Ukraine is surfing a wave of popular anger similar to the ones that brought the anti-establishment 5-Star Movement to power in Italy and US President Donald Trump to office.

Just 9 percent of Ukrainians have confidence in their national government, the lowest of any electorate in the world, a Gallup poll published in March showed. The global average was 56 percent in 2018. Just 12 percent of Ukrainian adults have confidence in the honesty of elections, while 91 percent believe corruption in their government is widespread.

"None of the three candidates suits me. And the other candidates simply will not manage to get through," said Kyiv resident Yevheniya Shmelkova. "Therefore, we are indecisive in general — should we go to the polls, or not go. No, of course, you need to go, but the result will be unpredictable."

Western governments have much at stake in the election because they took Ukraine's side in its conflict with Russia and have invested money — and considerable political capital — in keeping Kyiv on a path of integrating with the West.

Whoever is the ultimate winner, they are unlikely to move back into Russia's orbit, but Western officials and investors say they worry about the unpredictability that a Zelenskiy presidency is liable to bring.

Poroshenko was elected president in 2014, soon after Russia's annexation of Ukraine's Crimea region, and an armed uprising by Russian-backed separatists in east Ukraine that has killed 13,000 people and still rumbles on.

A frequent visitor to the front line wearing camouflage gear, Poroshenko has been credited with containing the conflict and standing up to Russia.

But many voters say he has failed to get to grips with corruption and poverty and that his own entourage is tainted by sleaze. An increase in gas prices pushed through under pressure from Western donors caused anger among consumers unhappy at their higher bills.

Tymoshenko has described the gas hike as "genocide," promising to lift pensions and emphasizing her past as a revolutionary martyr imprisoned by two presidents.

Zelenskiy has promised that, if elected, he will usher in anti-corruption and other reforms and breathe new life into moribund peace talks over the fate of eastern Ukraine, now de facto controlled by separatists with Moscow's support.

In a case of life imitating art, his campaign has been helped by the character he plays in his TV show: an everyman who becomes president accidentally, then cuts through graft and bureaucracy with plain-talking honesty. Zelenskiy has said he would introduce a bill to strip the president, lawmakers and judges of immunity from prosecution if elected.

Addressing investor fears about his inexperience, he told Reuters in an interview last month he would not allow Ukraine to default on its debt commitments to the International Monetary Fund, which has propped up the country with billions of dollars in loans in return for reforms.

By Matthias Williams and Margaryta Chornokondratenko/Reuters