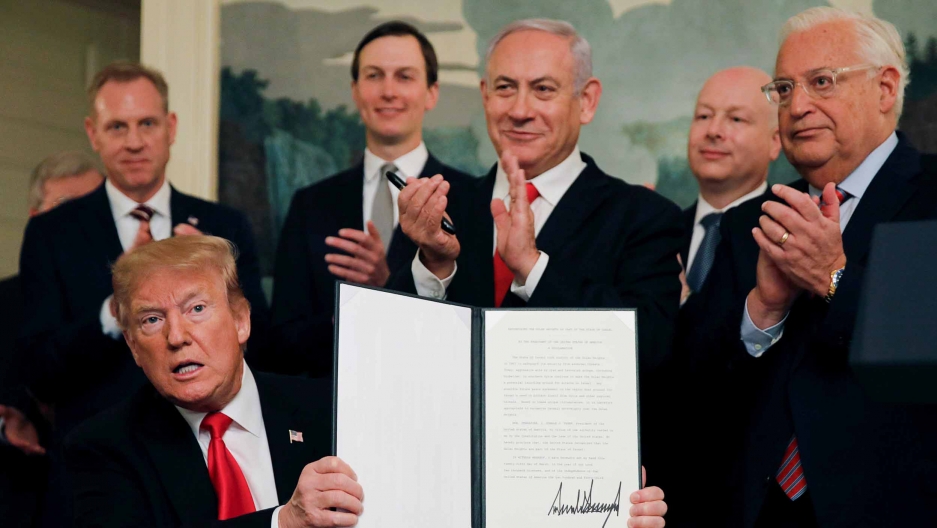 US President Donald Trump holds a proclamation recognizing Israel's sovereignty over the Golan Heights as he is applauded by Israel's Prime Minister Benjamin Netanyahu and others during a ceremony in the Diplomatic Reception Room at the White House in Washington, DC, on March 25.

US President Donald Trump on Monday recognized Israel's 1981 annexation of the Golan Heights in an election boost for visiting Israeli Prime Minister Benjamin Netanyahu, prompting a sharp response from Syria, which once held the strategic land.

With Netanyahu looking over his shoulder at the White House, Trump signed a proclamation officially granting US recognition of the Golan as Israeli territory — a dramatic shift from decades of US policy.

The move, which Trump announced in a tweet last Thursday, appeared to be the most overt gesture by the Republican president to help Netanyahu, who had been pressing Trump to recognize Israel's annexation since February 2017.

Israel captured the Golan in the 1967 Six Day War and annexed it in 1981 in a move not recognized internationally.

Trump's pronouncement has not gone down well elsewhere in the world. The United Nations says flatly that there has been no change in the status of the Golan Heights. The UN Secretary General António Gutierrez implied that Trump's piece of paper is basically worthless because annexation of territory by force is prohibited under international law.

The World's Marco Werman spoke with Scott Anderson, a fellow at the Brookings Institution and senior editor of the Lawfare Blog, about the policy change.

Marco Werman: Why is this Trump declaration at odds with international law?

Scott Anderson: When the international community adopted the UN charter, it was trying to restrict a number of behaviors that proved destabilizing to the international system up until the UN Charter and the World War II period. No. 1 on that list was the annexation of territory through the use of military force or military conquest. It's a fundamental principle embedded in Article 24 of the UN Charter which says that states should not use the use of force or threaten the territorial integrity and political independence of other states. That is the principle underlying a lot of the rules governing our international system that is arguably being put in tension with this decision on the part of the Trump administration.

Related: Trump tweet calls for US to recognize Israeli sovereignty in Golan Heights

Was the principle you just talked about the one that George H. W. Bush used to unite the world in support of the war against Saddam Hussein after he invaded and occupied Kuwait? It was in 1990 that he said that you can't change borders by force.

That's exactly right. It was the principle behind the first Gulf War. It's also the principle behind US objections to the Russian annexation of Crimea, which has been a major US foreign policy sticking point for the last several years across the last two administrations. It does raise questions as to whether the Trump administration's actions regarding the Golan Heights are going to weaken the case for the opposition to those other actions.

Are you willing to go so far as to say that, as a result of this Trump proclamation, it's now the position of the United States that it is OK to change international borders by force?

I think we know that the United States is trying to split hairs. They're very careful to say in the statement that the president signed that this is a unique circumstance surrounding the Golan Heights and they tie it to the threats to Israel that came from Syria both in 1967 and now.

They're trying to argue that this is an exception to that general rule without really fleshing out much of the bones of the argument there. We've heard from some Israeli officials who argued that the underlying principle here is that the state that is an aggressor shouldn't be able to make these sorts of claims of defense under international law when it loses its territory after it invades another state and that state takes some of its territory for defensive purposes. That's the narrative that they have with what happened in the 1967 war. That may not be fully destabilizing to all the circumstances of territorial conquest. You can distinguish it on those grounds, but that principle is a little bit hard to square with the UN charter's texts and past date practices.

It's really hard to distinguish sometimes between who is the aggressor and who is the defender in a conflict, particularly regarding specific stretches of territory. It's not clear to me how that rule could actually work in application effectively without weakening the overall principle.