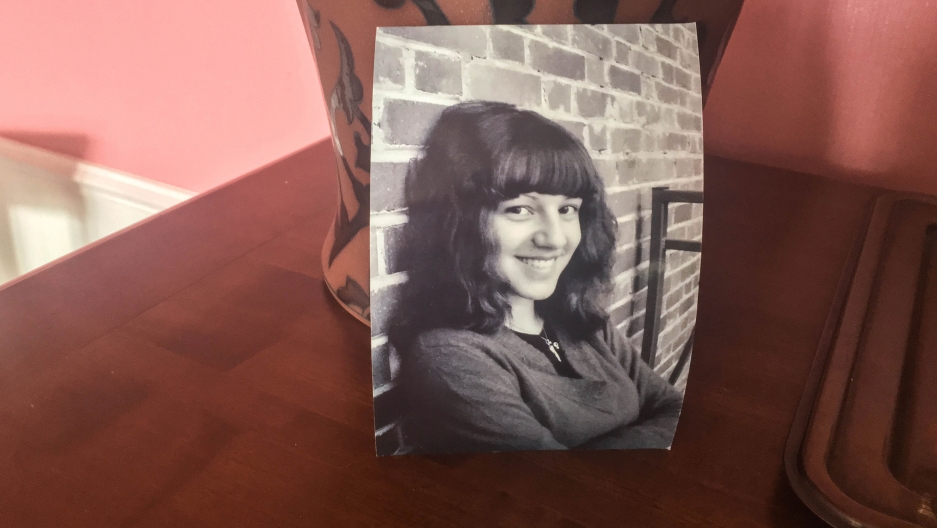 Lydie Maninchedda's daughter Julie left for Syria with her German husband Martin Lemke in the fall of 2014. She died in January, at the age of 26. Her three young children were recently repatriated back to France after a long battle to bring them home.

The boys — ages 5, 3, and 1 — were among the five French children repatriated from Syria as part of a government-led operation carried out earlier this month.

“They’re all here. ... My daughter was protecting them right until the end, and now it’s going to be up to us to protect them.”

“They’re all here,” she says. “My daughter was protecting them right until the end, and now it’s going to be up to us to protect them.”

Maninchedda’s daughter, Julie, moved to Syria in 2014 to join ISIS with her German husband. She died in late January this year, likely after being hit in a bomb blast, although the Manincheddas were unable to confirm this.

Related: The women of ISIS are more than just brides

Around the same time, Kurdish forces arrested the father, Martin Lemke. The boys, now without any parents, spent more than a month living in Kurdish-run camps in northeast Syria.

Then, on March 15, Maninchedda received a phone call. The French government had just repatriated five children from Syria. Three of them were her grandsons.

The French government has given little indication about future repatriations of French children, stating that decisions will be made on a case-by-case basis.

An estimated 2,500 children from various nationalities are still stranded in Syria and Iraq. Dozens of them are French. Many are under the age of seven.

“These children are victims of war."

Dosé and a team of three other lawyers are making a case against the state for failing to repatriate French children. Together they represent nearly 40 kids.

Their argument: France has violated its commitment to the United Nations Convention on Child Rights.

“The convention says we must protect children,” says Dosé. “We must guarantee them the right to life.”

According to the World Health Organization, at least 29 children have died while on route to or at the al-Hol camp in northeast Syria, co-managed by the United Nations High Commissioner for Refugees. The camp has nearly doubled in size in the last two months — from  33,000 to 65,000  — as ISIS continues to lose territory and power.

Yet, the French government is still tiptoeing around the matter, in part due to fears from the French public. A recent poll showed that two-thirds of the French population think even the children of ISIS fighters should remain in Syria and Iraq.

Some say the poll was misleading.

“You have to think about how the question was phrased,” says Veronique Roy, one of the founding members of Familles Unies, a support group for people with relatives who joined ISIS. Veronique’s son joined ISIS in 2014 and died in 2016.

“If we say the government will take responsibility and not just leave [children] on the side of the road, people won’t be so frightened.” 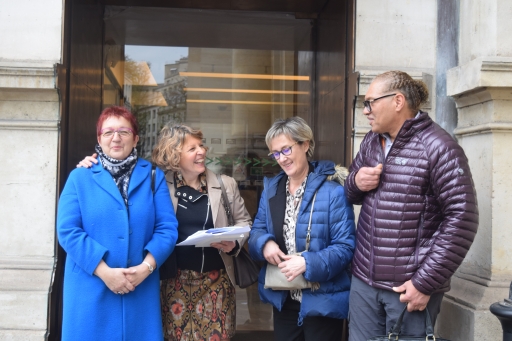 Lydie Maninchedda and other members of Familles Unies stand outside France's National Assembly following a meeting with lawmakers on Wednesday, March 20, 2019.

“If we say the government will take responsibility and not just leave [children] on the side of the road, people won’t be so frightened.”

Roy and other members of the support group recently attended a private hearing at France’s National Assembly in an attempt to sway parliamentarians to act quickly.

“The camps are overcrowded, disease is spreading,” says Thierry Roy, Veronique’s husband. “The government needs to tackle this problem and bring the children home as soon as possible … [children] are being exposed to disease … they’re weak. We have the ability to bring them back.”

But a string of recent terrorist attacks in France are still fresh in people’s minds, particularly the November 2015 attacks that killed 130 people in the French capital.

Le Carillon was one of the bars hit that night — a low-lit dive bar long frequented by 20- and 30-somethings who like to spread out on the spacious terrace.

“The government needs to tackle this problem and bring the children home as soon as possible…[children] are being exposed to disease… they’re weak. We have the ability to bring them back.”

Jean, a 29-year-old actor, has been a regular at Le Carillon for years. Jean did not want to share his last name because the issue remains very sensitive. He says there’s no question that adults who joined ISIS should not be allowed back into the country. But children are another story.

Related: Is it more dangerous to let ISIS foreign fighters from the West return or prevent them from coming back?

“[These kids] are orphans,” he says. "There are some who are afraid they’ll grow up to become killers … but we can’t leave these children on their own.”

“[These kids] are orphans. ... There are some who are afraid they’ll grow up to become killers… but we can’t leave these children on their own.”

Lydie Maninchedda says she understands that people may be scared and angry. She wants her young grandsons to know what their mother and father did.

“We’ll talk to them about their mother,” she says. “They have to know their story.”

But she says these children are also not responsible for their parents’ stories. They did not choose to go to Syria. They are French.

And they deserve to be home.