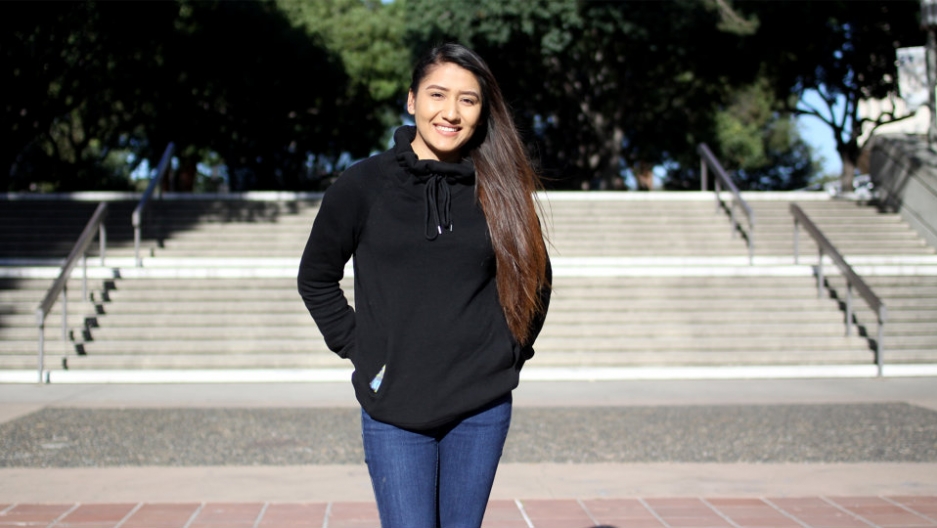 Marlen Gomez, 23, will graduate from the University of California Irvine this spring. The daughter of Mexican immigrants, Gomez is the first in her family to go to college.

Students hoping to attend the University of California, Irvine, started receiving letters of acceptance this month. The school, located between Los Angeles and San Diego, is considered to be among the top public colleges in the country.

But the campus is also notable for another reason — it has made strides in recruiting and graduating Latino students.

One of those students is Marlen Gomez, a college senior. The 23-year-old says her hometown, Santa Ana, where more than 90 percent of the population is Hispanic or Latino, was a tough place to grow up.

"The kids get a labor job. The girls get pregnant at an early age,” she said. “We just get stuck."

Read: Why the path to college is not clear for some immigrant students

Similar to 80 percent of the Latino students at UC Irvine, Gomez, the daughter of Mexican immigrants, is the first in her family to go to college.

"The statistics are sad because I have four older siblings, and I'm the youngest one, and they had to work unfortunately to help out my mom — my parents," Gomez said.

Over the past 10 years, UC Irvine has nearly tripled the percentage of Latinos on campus — from 12 percent to 34 percent — and increased their six-year graduation rate from 75 percent to 95 percent.

Despite a statewide ban on the consideration of race in admissions, over the past 10 years, UC Irvine has nearly tripled the percentage of Latinos on campus — from 12 percent to 34 percent — and increased their six-year graduation rate from 75 percent to 95 percent. UC Irvine has directly targeted heavily Latino communities like Santa Ana, aggressively recruiting talented students like Gomez.

"It's part of a long-term commitment, and it begins with individuals," said Douglas Haynes, vice provost for academic equity, diversity and inclusion. Haynes spearheaded the school's campaign to create a more diverse campus after California voters banned the consideration of race in admissions in 1996 through a ballot initiative called Proposition 209.

"... on the one hand, it forced institutions to recast its strategies, but at the same time, Prop. 209 sent a very blunt, disrespectful message to underrepresented racial populations in the state of California."

"I think on the one hand, it forced institutions to recast its strategies, but at the same time, Prop. 209 sent a very blunt, disrespectful message to underrepresented racial populations in the state of California," he said.

UC Irvine responded to that message by encouraging underrepresented, first-generation students to apply, while also raising awareness about how they might pay for their education through grants and loans. Once these students arrive on campus, the university gives them extra support, guiding them through various courses and degrees and offering them mentors and workshops to help them deal with stress.

The result of all this work is UC Irvine's federal designation as a Hispanic-serving institution, which qualifies it for additional grants.

Still, Haynes says, UC Irvine has a long way to go: Latinos make up nearly half of the college-age population in California, while the school's enrollment is 34 percent Latino. Even with their high graduation rate in six years, they are less likely to graduate in four years than their white, black and Asian counterparts.

"We're not done yet,” Haynes said. “We want all of our students to graduate within four years."

“Latinos have made some progress, but they are at only half of their overall representation in the college-age population," said Martin Van Der Werf, who co-authored the report.

“If you go only by test score, the test score is always going to favor white students."

"Even low-performing whites might score higher than the highest-performing black or Latino students,” he said. “If you go only by test score, the test score is always going to favor white students."

"We have a system in which just about everything favors white students, and then the public higher education system becomes the capstone of that inequality,” Van Der Werf said. “White students who already have all of the advantages go to the best-financed colleges and then have the highest graduation rates."

At UC Irvine, Marlen Gomez is on track to graduate this spring with a degree in psychology and social behavior.

"I want to start a legacy for my nieces and nephews and be a better role model for them," she said.

Gomez said it may sound cliché, but her dream job is to become an academic counselor and help other students from her hometown of Santa Ana earn a college degree.