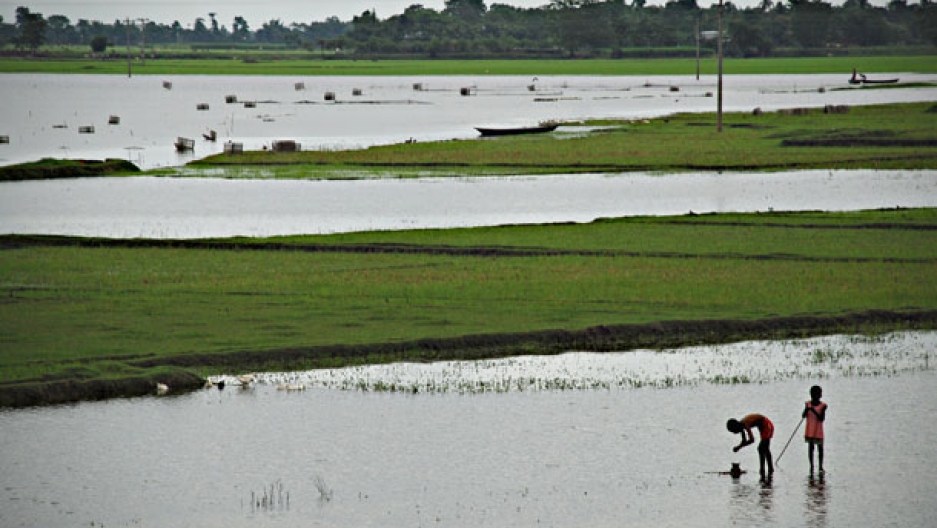 Due to saltwater intrusion, many farmers in Bangladesh are converting their rice paddies into shrimp farms, which are more tolerant of salt.

Climate disruption is forcing entire communities from their homes across the globe, and perhaps no population is more imperiled than the people of Bangladesh.

“Bangladesh is one of the world's most vulnerable countries to climate change, and it's experiencing a pretty wide range of impacts."

“Bangladesh is one of the world's most vulnerable countries to climate change, and it's experiencing a pretty wide range of impacts,” said National Geographic writer Tim McDonnell, who recently wrote about his travels there.

Nearly 80 percent of Bangladesh sits in a flood plain, near the rising seas. Ice melting in the Himalayas is coming down through its rivers, increasing the volume of water and leading to increased riverbank erosion. Saltwater intrusion from the sea level rise is poisoning crops and fishing areas. And even while annual tropical storms and cyclones continue to hit Bangladesh, the northern part of the country is experiencing drought.

Some of these events are not new, McDonnell points out. “People here have been living with environmental catastrophe for generations and generations,” he said. What’s new is the frequency of the events and the scale of their impact.

Because Bangladesh is such a densely populated country, these events often lead to people being displaced in one way or another. In this respect, McDonnell believes, the country may be the “canary in the coal mine” for the problems facing civilization as climate disruption accelerates.

“All the problems facing Bangladesh are prompting human migration. ... When you look at Bangladesh, you see what happens when you have this kind of unprecedented level of human mobility. ... It really encapsulates the challenges lots of countries are going to face moving forward.”

“All the problems facing Bangladesh are prompting human migration,” McDonnell explained. “When you look at Bangladesh, you see what happens when you have this kind of unprecedented level of human mobility. You have unchecked, rampant urbanization; you have risk for all sorts of vulnerabilities — health problems, human trafficking … It really encapsulates the challenges lots of countries are going to face moving forward.”

Many Bangladeshis affected by climate disruption are moving to Dhaka, the capital city, but “the city is out of its depth,” McDonnell said. “I spoke to everyone from migrants themselves to scientists to urban planners — a really broad range of people who are involved in this space — and there was pretty much universal agreement that the city is beyond its capacity.”

Thousands of people arrive in Dhaka every day. Not all of them are climate change migrants, McDonnell notes, but many of them are.

“Forty percent of the city's population lives in slum areas,” he added. “The city has very little in the way of affordable housing … People are looking for any place they can stay, but it's all happening in a helter-skelter way that creates a lot of problems. Security, health, utilities, basic living conditions — all of these things are really negatively affected when you have so many people coming in, in such an unplanned way.”

In some cases, Bangladesh faces a double crisis, McDonnell says. Rohingya refugees, for example, who are fleeing into Bangladesh from persecution in Myanmar are moving into areas that are highly exposed to climate change.

“I think this is something that really needs to be looked at closely all around the world,” McDonnell said. “Not only how climate change is prompting migration or refugee crises, but [how it] is creating additional problems for migrants or refugees who move because of violence or other forms of persecution, and then are exposed to climate change impacts in the place where they arrive.”

High rates of population growth in Bangladesh exacerbate all of its problems. More and more people are exposed to environmental catastrophes, which leads to increased levels of displacement.

A local leader in one of the areas McDonnell visited told him the loss of people in coastal communities “leaves a hole in the heart of the village.” Many people live with the emotional strain of losing a family member to migration and are starting to lose faith in their ability to maintain a life in a place they have called home for generations.

“I didn't meet a single person who said, ‘I'm really excited to get to go try my luck in Dhaka,’” McDonnell said. “This is always a very painful choice for people. But at the same time, I found that people in Bangladesh were really up for trying to adapt the best they can. One scientist I interviewed said Bangladesh might be one of the world's most vulnerable countries to climate change, but it's also one of the most ready to adapt.”

Nevertheless, the World Bank predicts more than 13 million people will become climate migrants in Bangladesh by the year 2050 — an overwhelming number.

“That's why it's so important at this stage for world leaders to become more serious about dealing with this climate change and migration nexus,” McDonnell said. It means “figuring out ways to provide safe passage for people. Getting more serious about what this crisis is going to look like and what we can do to try to ease life for people who are affected by this.”