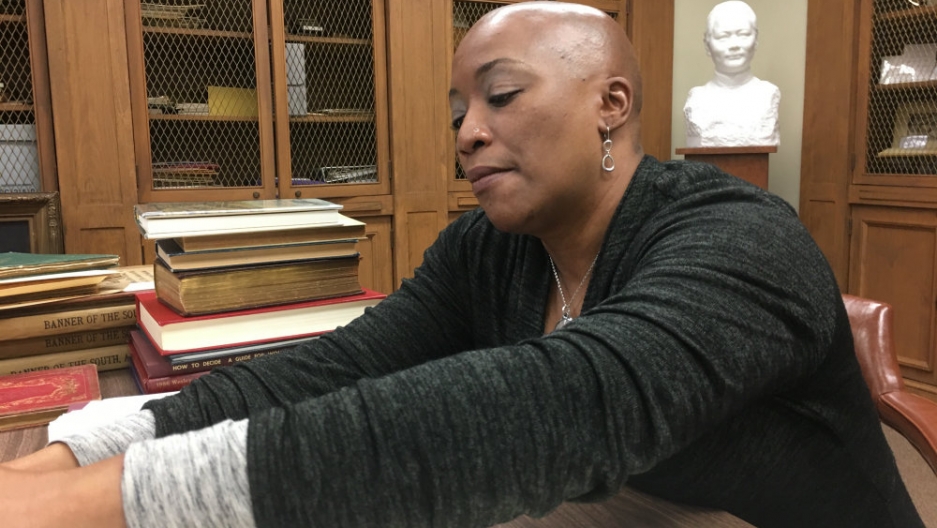 On Tonya Parker’s office door, there’s a picture of her in the 1990s with her college roommate, who was from South Korea. A few weeks after they moved in together, Parker remembers the roommate suddenly turned unfriendly. Parker asked what was wrong, and finally, the roommate said she’d heard things about black people from another student.

“She had informed her that she needs to be cautious rooming with me, she needs to make sure that she don't leave all her stuff in the room,” Parker says. “And she's saying all this and I think I was falling apart on the inside.”

This was at Wesleyan College, in Macon, Georgia — a private school started in the 1800s for upper-class white women. It became known for its international students in the early 1900s after three sisters from China enrolled. One, Soong Ching-ling, went on to become the third wife of Chinese ruler Sun Yat-sen. There’s a picture of her in the Wesleyan archives, sitting on some steps with other students, and they’re all lined up in the shape of a K. The Ku Klux Klan was part of the identity of the school.

Some of the yearbooks from the early 1900s have KKK on the cover. African Americans weren’t admitted to the college until the 1960s, but now the all-female student body of about 700 students is 40 percent women of color and 15 percent international students. Wesleyan proudly says local students can experience the world just on campus. 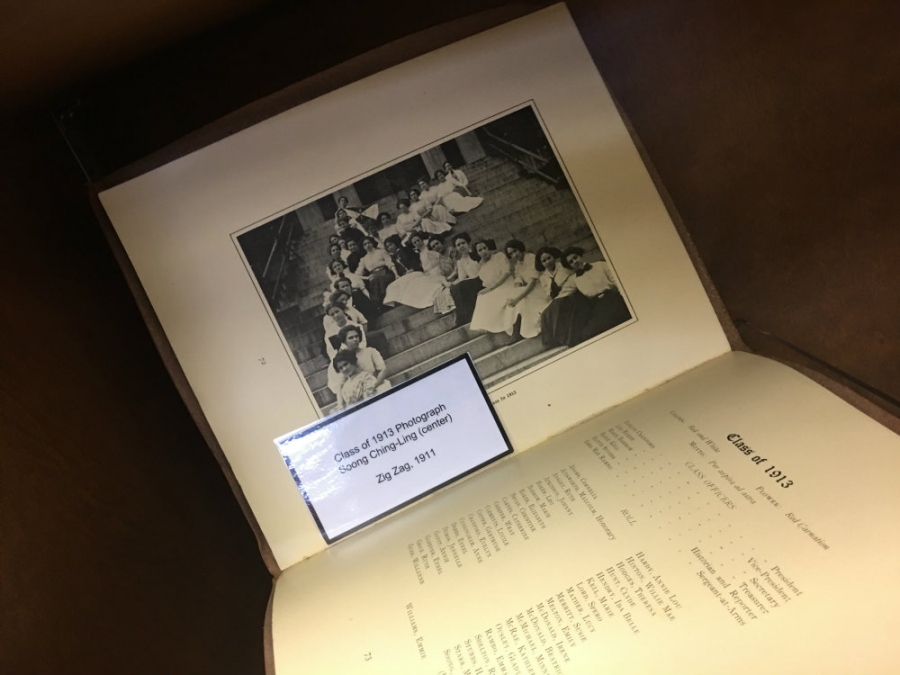 A photo of students from Wesleyan College from the early 1900s sitting on the steps of a building and forming the letter K. The private college in Macon, Georgia, has recently confronted its historical ties to the Ku Klux Klan.

And that’s why Tonya Parker came to Wesleyan as a student. She eventually reconciled with her roommate, after long discussions about race and American history. But there were still Wesleyan traditions that made Parker uncomfortable — like once, another student woke her up and led her outside for a ceremony where everyone was wearing Klan-like hoods. Parker managed to slip away.

She teaches them a series of steps. First: Someone says something that upsets you. Then: Be intentional about saying, "I heard you." Next: Ask questions. Listen to the answers without being defensive. Final step: Provide information.

The students break into pairs and practice the techniques. Student facilitators keep them on track.

The semester these sessions began, Donald Trump was elected president. Tension rose around the country and on campus. Wesleyan made the local news when someone put racist, threatening messages on the dorm doors of international students and students of color. 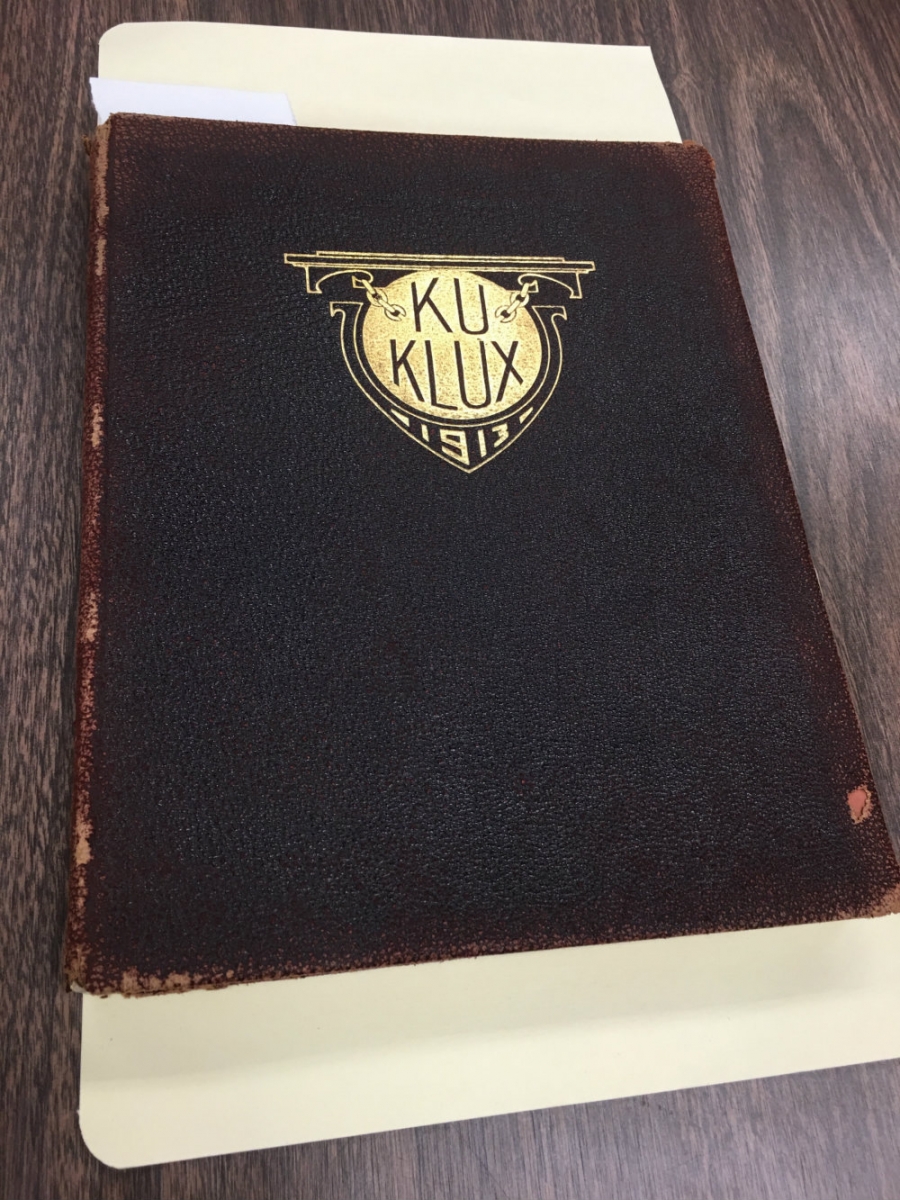 The cover of a Wesleyan College yearbook from 1913 shows the school's ties to the Ku Klux Klan.

A  few months later, Wesleyan again found itself in a media spotlight that left the campus reeling. The Atlanta Journal-Constitution published a story that reported an open secret: The school had historical links to the Ku Klux Klan that it had never formally acknowledged. It pointed to a practice students started in the early 1900s of giving every graduating class a name and color drawn from KKK culture.

“It was the Purple Knights, the Golden Hearts, the Green Knights and the Red Pirates,” remembers junior Anna Marmolejo Rios, listing the names used by the Ku Klux Klan.

“A lot of people didn’t know. I didn’t know when I got here,” says Rios, who is a student facilitator for Parker’s diversity discussions and has temporary protection under the Deferred Action for Childhood Arrivals program.

“Once that history came out it was problematic for everybody,” says another facilitator, senior Stacy Rice, who’s back at school after retiring from the military. “There was a lot of discord around campus. They couldn’t keep sweeping it under the rug. They had to address the issue.”

Students and alumni whose families had been attending Wesleyan for generations argued the class names were a cherished school tradition, no longer connected to their origins.

But students who talked about it in Tonya Parker’s diversity discussions came to a consensus that the class names should go. Parker remembers it as a difficult time.

“There was a lot of discord around campus. They couldn’t keep sweeping it under the rug. They had to address the issue.”

“There was a lot of discord around campus," Parker says. "They couldn’t keep sweeping it under the rug. They had to address the issue. I remember sometimes leaving the campus and I felt like my stomach was in knots. I didn’t think sometimes I was going to make it because there was so much tension.”

Administrators were faced with making a public decision Wesleyan had considered unnecessary for decades. They could keep the class names, or get rid of them, and by doing so condemn the school’s history.

“The purpose of a Wesleyan education was to educate women who would promote white supremacy. I mean, that was what it was for,” says Assistant Provost Matt Martin, an English professor. “And so to move from that foundation to a college now where the entering class has more non-white students than white students is a huge transition.”

Martin says the administration decided Wesleyan needed to break from history. Last summer, they got rid of the class names. When this academic year started, each graduating class was only able to keep an identifying color.

Some on campus felt the move was silly and unnecessary, and The World tried to get a hold of students and alumni who feel that way, but they didn’t want to talk. Martin says beyond a freshman orientation, students at Wesleyan don’t have to take part in diversity and inclusion discussions.

“The purpose of a Wesleyan education was to educate women who would promote white supremacy. I mean, that was what it was for. And so to move from that foundation to a college now where the entering class has more non white students than white students is a huge transition.”

“It's a real challenge, I think, particularly, to be honest, for our white students,” he says. “I think for white students, often they can see these kinds of discussions about race in class as things that are threatening things that make them feel guilty.”

But people who opt out are part of the problem, says Maureen Costello, of the Southern Poverty Law Center’s Teaching Tolerance program.

“That’s the essence of white privilege — that some people feel exempted from having to face racism,” she says.

She says diversity discussions should be worked into all classes, and it should be the responsibility of all teachers, not just one or two administrators on campus.

More: Amid 1619 anniversary, Virginia grapples with history of slavery in America

For now, she says, diversity discussions are a step in the right direction because they make students of color feel heard. And that seems to be what’s happened at Wesleyan.

“I feel like because we have these different spaces, it provides a place for students to discuss how they feel,” says Jaylyn Dickerson, a senior psychology major. “I do think they are trying. And I also think if they don’t work, as a student body we will make sure the word gets out.”

To a Wesleyan international student today, the school comes off as tolerant and inclusive.

“It’s so different than I expected it to be,” says Nora Stauhein, a freshman from Norway. “I would definitely say the acceptance that I’ve found here at the college is more than I have seen back home.” 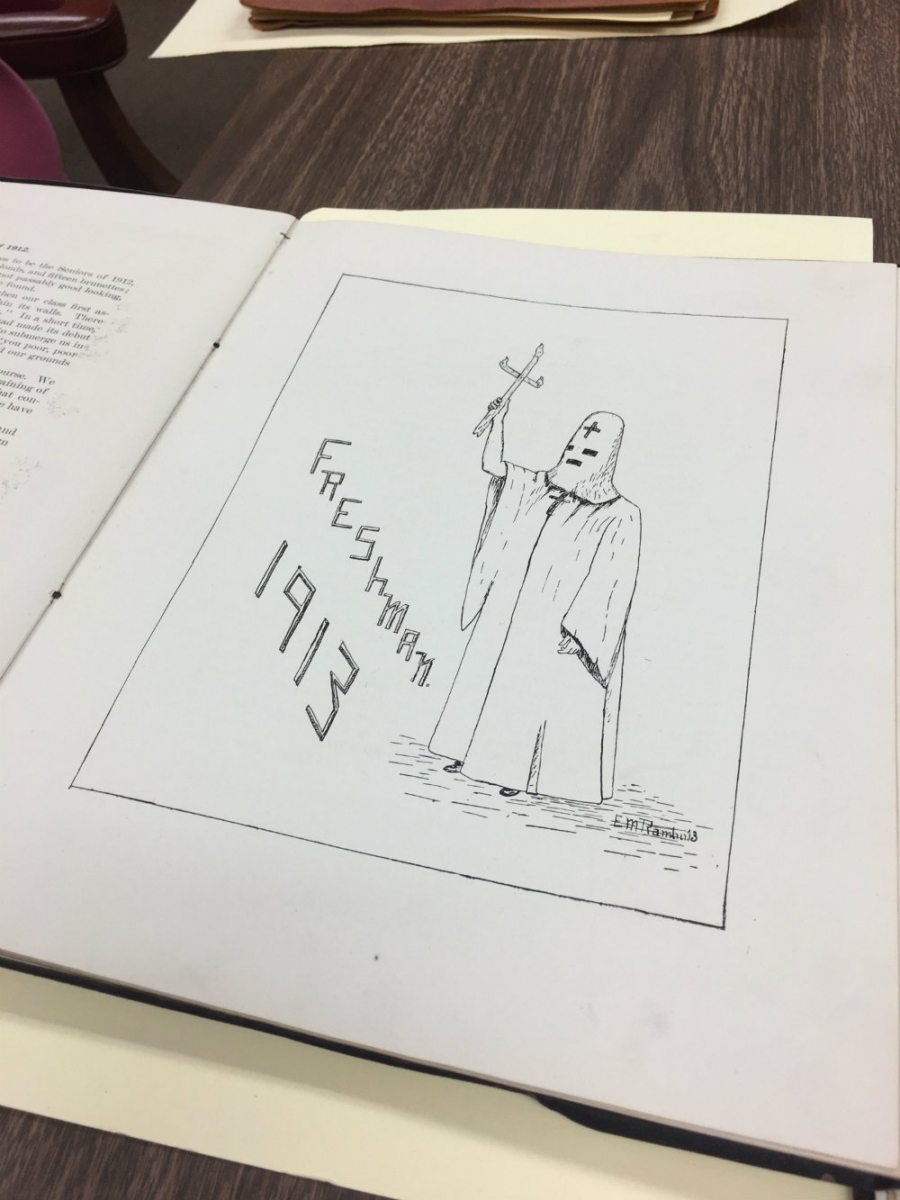 Wesleyan College's 1913 yearbook include a drawing of a person in robes and holding up a crucifix.

As far as she knows this is what Wesleyan — and the US — are like. And that’s why Tonya Parker has stayed at Wesleyan. Getting rid of the class names was a significant step. Parker says in at least one case, a parent said they were removing their student because Wesleyan wasn’t the place they thought it was, and administrators let them go.

But Parker still faces opposition from people who get defensive or aren’t open to seeing things differently.

“I come in and I listen to diverse perspectives and I try to get people to communicate with one another about these differences and try to make things better in the process,” she says. “But first we have to acknowledge that there is a problem, and Wesleyan has done that.”

There are new clashes on campus every day that cause her anguish. But for Parker, the progress that’s been made is worth it.

“The students — when I could hear that they were changing in (how they feel) about things — it’s like ‘OK, Wesleyan, you all are doing something, you do care about us,’” she says. “And then I know that the work has been paying off, and I feel really good about that.”

The question for Parker is what happens now — if progress will continue. She says Wesleyan’s actions will determine how much trust she and students of color have in institutions to change.

Editor's note: An earlier version of this story misidentified a woman in a photograph as Soong Mei-ling. It was her sister, Soong Ching-ling, the third wife of Sun Yat-sen. Both were students who went on to marry Chinese leaders. Also, some yearbooks from the 1900s have "KKK" written on the cover, not the 1990s.