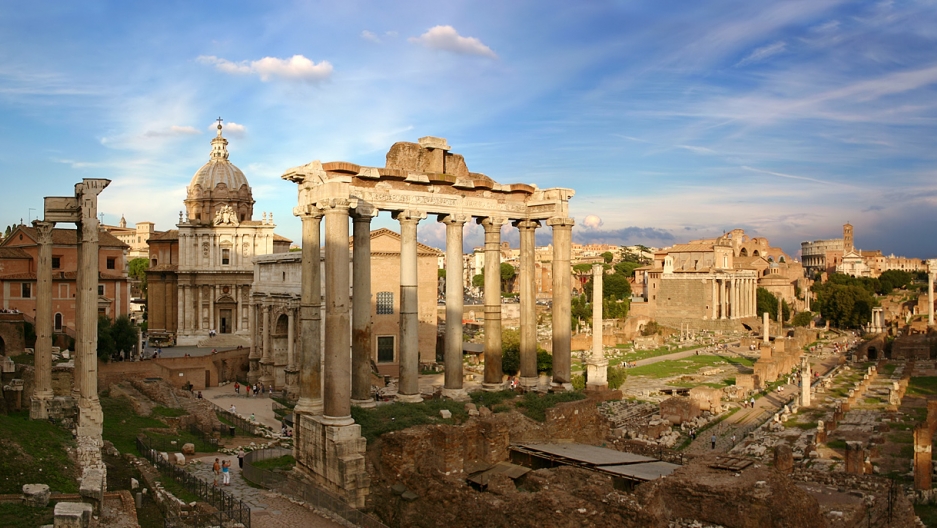 The ruins of the Roman Forum, the center of ancient Roman government.

Looking back at history, it's easy to wonder how our current newsmaking leaders would compare to those of antiquity.

Is President Donald Trump really like Nero? Or was he more of an Augustus? Barry Strauss, a professor of ancient history at Cornell University who has written eight books on ancient history, discussed that with The World's host Marco Werman.

His new book "Ten Caesers: Roman Emperors from Augustus to Constantine," published earlier this month, explores the lives of Rome's most famous leaders.

Marco Werman: When I'm trying to compare Roman emperors to Donald Trump, the first one that springs to mind is Nero, who fiddled while Rome burned. I'm not the only one who's made this easy comparison. How apt is it and do you, as an expert, see similarities?

Barry Strauss: Well there are some similarities. Nero and Donald Trump would agree that politics is showbiz. After all, Trump had a successful career in showbiz before going into politics. And likewise, another thing they have in common, is that they are both builders. Nero wanted to rebuild Rome and Trump, of course, had a reputation as a builder before going into politics.

You know, the funny thing about Nero is that for all the bad reputation that his personal life deservedly gets, he gave Rome pretty good government. He gave Rome a period of peace and prosperity. If we want to point to some things that he did that were not good, the way he treated the provinces — let's say, the allies, in the case of Trump. So I guess one area in which we hope that Trump turns out not to be like Nero is in his alliance management.

Related: Where did the Etruscans come from? The linguistic and genetic clues are piling up.

What differences between Trump and Nero do you think are key to underline here?

Well, Nero was an artist first and foremost. He played the lyre and he sang. He didn't literally fiddle while Rome burned, but he did play the lyre and sang while Rome burned. There are some who even think he was responsible for burning Rome because he wanted to undertake a huge urban renewal program. I think most scholars would say that's slander. But there are some who say, "No, it's it could well be true."

Nero also persecuted Christians. According to some reports, he burned them in the area where the Vatican now stands. So, that's also another analogy that we don't want to be true.

I think there are other emperors who Trump should also be compared to. I don't think that Nero is the only analogy.

Which emperor do you think is closest to Donald Trump?

So, one is Augustus because Augustus was a genius at branding. As you know, his name wasn't Augustus, he was born Gaius Octavius. Then he was adopted by his great uncle Julius Caesar and he became Gaius Julius Caesar and some people called him Octavian. And then finally he took the name Augustus which means "reverend." So that's a sign of his branding.

Also, he had a slogan: "the republic has been restored." Now, the one thing that Augustus did not do is restore the republic. He turned the republic into an empire. But this was his slogan. Likewise, Donald Trump has a slogan: "Make America great again." And I think both men would have agreed that slogans are tremendously important.

All right. So he didn't.

History repeats itself. He didn't have that slogan. But history does repeat itself in sloganeering.

Would you say that was kind of his philosophy, though?

Yes. "Make Rome great again." Absolutely, it was his philosophy. Augustus is coming to power at the end of a period of civil wars and the great emphasis that he puts on, and that he has his people put on, is that peace has been restored, Rome is renewed again, and there is a new order of things. We've entered a new era. It's a great new era. It's a new day in Rome. So yes, in a sense "make Rome great again" is indeed Augustus' philosophy. Augustus was extremely shrewd in another way in which he branded himself as he said, "I'm not a dictator and I'm certainly not a king. I am, in fact, the first citizen." He called himself the Princeps, from which we get our word prince, but in Roman times it would have had a connotation of first citizen. He wanted to be very careful to say to people "I'm not like Julius Caesar. I'm not a dictator and I'm certainly not a king." They were quite careful about what they called themselves.

Well, talk about branding, I mean he got a month named after him.

He got a month named after him. Other emperors wanted to have a month. Nero a wanted a month too, but it didn't stick, fortunately.

There was never a female emperor or ruler of Rome, was there?

No, there never was.

But can you think of any parallels in ancient Rome for somebody like Nancy Pelosi?

Yes. So, Nancy Pelosi, on the one hand, is a powerbroker and she knows how to play hardball, and there were quite a few imperial women who are like that. Probably the most famous is Livia, who was the wife of Augustus and the mother of the second emperor Tiberius, and certainly played a role in Tiberius' succession to the throne. She was an emancipated woman legally, immensely wealthy and dedicated buildings in her own name. She was very powerful and very much knew how to work behind the scenes. When she dealt with her husband Augustus, to whom she was an important adviser, she took notes and she kept letters from Augustus. And later on, when her son Tiberius was emperor, she would pull out these letters and say "look, this is the way it's supposed to be done." So, she was taking notes and she was very careful.

Well, like Nero, she's a showbiz natural and I think she does an incredible job of putting herself out there and developing a following. But she's not an emperor yet. At this point in her career, she seems to me more like a figure from the late Republic than from the Roman Empire. To her admirers, she's a people's tribune like the Gracchi, who opposed the wealthy on behalf of the poor of the republic. To her detractors, I suppose she's a revolutionary like Catiline, who led an armed rebellion against the republic. She'll be one that we really want to watch in the years to come.

Yeah, even for neutral outsiders she has a lean and hungry look, you might say.

She does, yes indeed.

"And again and again, we have no end of presidents who've been compared to Julius Caesar. Trump is only the latest one."

It is a bit of a bar stool trope, but as a professor of classical history do you ever find yourself making comparisons between the American experience and ancient Rome, and does it pay off in the long run?

I think it does. I think we have to be careful, but there certainly are certain similarities that do make you think. From the very beginning, the people who founded America were looking at Rome. They wanted to model themselves on the Roman Republic in various ways. And from the very beginning, they were looking at their leaders who were too powerful and saying "Another Julius Caesar!" It starts with King George III, who the founding fathers branded as a Caesar. And again and again, we have no end of presidents who've been compared to Julius Caesar. Trump is only the latest one. There's something in the American DNA that wants to have a Caesar and to pivot against the Caesar.

The other thing that's in the American DNA is that from an early time, from as early as someone like Jefferson, the leaders saw America as an empire — but a different kind of empire. Jefferson famously called America an "empire of liberty." The analogy does pay off because Americans always should be asking ourselves: "Well, are we an empire and if so, what kind of empire are we?" But it's hard not to look at the power America exercises in the world today and not to see it as a kind of imperial power, whether we're a formal empire or not. I think we want to measure ourselves against the Romans and in some ways.

I'm guessing most modern leaders don't look up leadership and psychological profiles of the Caesars as models for their own leadership. So, do these parallels simply suggest that maybe modern leaders, not to mention citizens, have not learned a lot from these Roman leaders?

It depends on what you're asking there. If you're saying that modern leaders have failed to learn the lessons of history, I would say yes. Absolutely I think they've failed to learn the lessons of history and they could benefit from looking at the lessons of history again. I think we can't study history enough. History doesn't lay down the law. History isn't an iron rule of what's going to happen, but it does suggest some lessons and some parallels that we ignore at our peril. And I think particularly as Americans, we love novelty. We love things that are new and we don't want to look at the past. We're always looking forward to the future, but the future is rooted in the past and human experience is very old. Which is why I think we need to look back at people like the Romans.