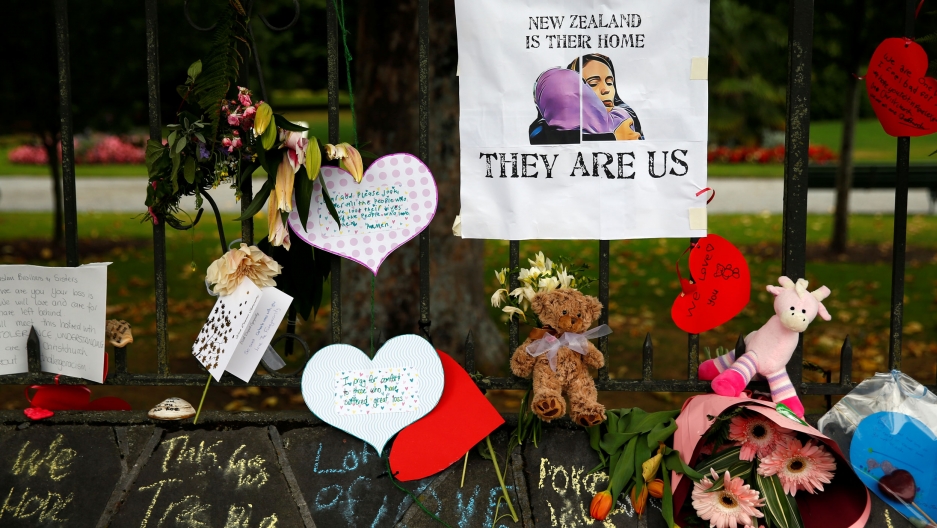 Flowers and signs are seen at a memorial site for victims of the mosque shootings at the Botanic Gardens in Christchurch, New Zealand, on March 18, 2019.

New Zealand Prime Minister Jacinda Ardern said on Monday she would announce new gun laws within days, after a lone gunman killed 50 people in mass shootings at two mosques in the city of Christchurch.

"Within 10 days of this horrific act of terrorism we will have announced reforms which will, I believe, make our community safer," Ardern told a news conference after her cabinet reached in principle decisions on gun reform laws in the wake of New Zealand's worst ever mass shooting.

In addition to the 50 killed, dozens were wounded at two mosques in the South Island city during Friday prayers.

Related: New Zealand shooting video was 'made to make us watch it.' This professor says don't.

Under New Zealand gun laws, A-category weapons can be semi-automatic but limited to seven shots. Live-streamed video of a gunman in one of the mosques showed a semi-automatic weapon with a large magazine.

Ardern did not give details on new laws, but has said she supports a ban on semi-automatic weapons following the Christchurch shootings.

"In New Zealand, gun ownership is a legal privilege, it's not a legal right," explains Professor Alexander Gillespie, who teaches law at the University of Waikato in New Zealand. "And so this means that it's possible for the prime minister to act with a little more speed than what happens, say, in the United States."

He says there's also a strong gun lobby there that advocates for hunters, as well as pro-gun advocates who believe the problem is not guns, but people.

Gillespie spoke to The World's Marco Werman about if those arguments are still valid in the wake of the Christchurch shootings.

Alexander Gillespie: It's unlikely that will hold a lot of water. Right now, the presumption will be put upon the gun enthusiasts to say well, why do you need this to go hunting? Why do you need this for sports events? What else could you use? And so I think the burden will be reversed, rather than the anti-gun group saying that this is no longer safe, it will be for the pro-gun group to say why it is safe and why it should be maintained.

Marco Werman: The last time there was a mass shooting in New Zealand was in 1990. I mean, the US seems to have shootings like these on a regular basis, so let's get to this question, why [has] the political debate moved so quickly in the several days since the shootings in Christchurch? Is parliamentary democracy — what you've got in New Zealand — just more nimble than this kind of behemoth we've got here in the United States?

I wouldn't say it's more nimble. It can gridlock at times. But I would say that this has gone to the core of the country. New Zealand is a very different place to what it was last week. And unlike in your country, we don't have a Bill of Rights that enshrined the right to firearms. So this means that there's more maneuverability for the politicians to make the restrictions that the public are now demanding.

And is the stunning side of this — the way you put it, "New Zealand is a very different country from what it was last week" — is that a question of regularity of these things or are New Zealanders thinking something that the US has not thought of yet?

Last Thursday New Zealand was considered second on the Global Peace Index for being the most peaceful country on the planet. We had a terror rating of low, which meant it was unlikely and we had a national homicide rate by firearms of about 10 per year. And so, we considered ourselves a very peaceful, safe and tolerant country and now most of the country is completely upside down and they want to try to go back to where they were.

So you're saying the body politic in New Zealand is just more rooted in kind of a calm society with less of a tradition of gun rights and basically this happened and they're not going to take it anymore.

I think most people feel about something radical has to change and also that the nature of this crime is different because normally when you have debates about gun control, it's about criminals having access to firearms. But this was a lawful person with an entry level firearms license and so people are now saying, it's not just about the criminals, it's about the regulation of what is already lawful and permissible. And in our society, we are so deeply shocked that people are demanding more drastic action that you would get. It's not a debate at the moment necessarily about foresight. It's a debate about reaction to the size of the crime that happened. We've never seen a major shooting like this. The last major shooting we had in 1990 was just over a dozen people who were killed and the feeling then was that well, if we just tightened the regulations it shouldn't happen again. There is a certain degree of naivete in the Kiwi psyche and the belief that we were insular and all of the bad things in the rest of the world would not happen to us and what happened in 1990 we believe was an anomaly. But I think one of the major things that's happened since last Friday is that the country has had to grow up very quickly and react because the threats that are out there and not just local, they're now international and they came to us because we were seen as a soft target.

For you, what is the biggest concern that emerged from last Friday: the gun story or what seems to be a narrative of white nationalism or white supremacy?

I think you can't disentangle the two of them. You've always got extremists in society and the extreme right has always been in New Zealand. There's been evidence since the 1930s. As a group, it's never been more than say, a couple of hundred hardcore enthusiasts, but they've always been enabled by a large part of the community around them which is tolerant of racism. That's something that New Zealand has to grapple with now, that this person was in plain sight and that's going to be a difficult debate but the larger debate is the ability of the person with the hatred and the ideology to access the firepower to then carry out their madness.