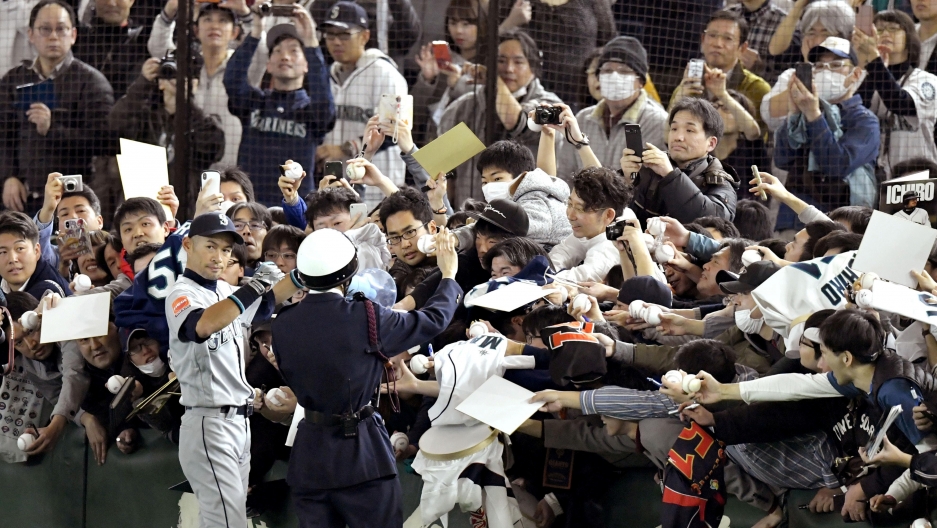 Seattle Mariners' outfielder Ichiro Suzuki gives autographs to fans before an exhbition game in Tokyo against the Yomiuri Giants, March 17, 2019.

Ichiro Suzuki is so great, he doesn’t need a last name. He is simply Ichiro.

After a spectacular start to his career in Japan, Ichiro relocated to the United States to play for the Seattle Mariners in 2001 when he was 27. Now 45, Ichiro is suiting up for two final games with the Mariners in Japan when the major league baseball season kicks off on Wednesday in Tokyo.

The Oakland A’s are playing the Mariners. It’s the fifth time Major League Baseball has begun the season in Japan, but the first in seven years.

Three words to sum up the mood there: “Japanese loves Ichiro,” said Seito Takamizawa, a fan who is going to see Ichiro play on Wednesday and Thursday at the Tokyo Dome for what many expect will be his final appearance as a player.

Back in 2001, many doubted if a Japanese player other than a pitcher could hack it in the US. They argued that Japanese players were too small. But in Ichiro’s first season with Seattle, he silenced the critics: Ichiro won the Rookie of the Year and MVP awards. And he dazzled with his glove, winning 10 straight Gold Glove Awards, recognized as the top right fielder in the American League.

Ichiro would go on to play 18 major league seasons — mostly with the Mariners, but also the New York Yankees and Miami Marlins — and rack up the most hits in the history of professional baseball: 4,367 when you combine his stats from Japan and the US. That fills Japanese fans with pride.

“I was so excited and proud because major league baseball is the highest level in the world, and Ichiro established many amazing records.”

“I was so excited and proud because major league baseball is the highest level in the world, and Ichiro established many amazing records,” said Takamizawa, who works in public relations in Tokyo.

For Japanese people, Ichiro showed that one of their own could excel on the world’s biggest stage.

And Ichiro did it all with flair. When Ichiro came up in Japan in the 1990s, Japanese batters were taught to have both feet on the ground and wait for the pitch with little movement in the batter’s box. Then Ichiro arrived.

“His front leg swung like a pendulum. He timed pitchers that way, and he wiggled his bat, and pointed at the pitcher and there was lots of movement. And the coaches hated it,” said Jim Allen, a baseball writer who’s been in Japan for 34 years (his work can be found at jballallen.com).

But Ichiro's unconventional stance worked. And the fans loved it.

“Ichiro was a remarkable player, and he was unique in a country that tries to get people to shy away from being unique.”

“Ichiro was a remarkable player, and he was unique in a country that tries to get people to shy away from being unique,” Allen said. “It's odd, but Japanese people want that kind of hero who bucks the trend to be like everybody else. They don’t want to raise them, but when they do come up, and they do achieve, and they do succeed, then they celebrate them to the end of the earth.”

Even though Ichiro’s talents have diminished with age, Ichiro’s farewell in Japan this week is generating a lot of buzz.

“He's still on billboards and advertisements around the country, and you still see him on commercials,” said Jason Coskrey, a sportswriter with The Japan Times.

Ichiro was also a TV host in Japan. His show was called "Two Chairs."

Ichiro and a guest sit in two chairs in a largely dark room. They don’t look at each other. They both face forward. An announcer says a word, and Ichiro and his guest say what the word means to them.

“It was kind of like a brainy, heady kind of show,” said Coskrey. “It was kind of that thing you would totally expect Ichiro to be doing because he's kind of cool, weird, mysterious. All that stuff.”

Here’s the other thing about Ichiro: They loved him in Seattle, too. It was common to see Japanese flags waving there, as well as during road games in other American cities. Seattle sold ballpark sushi named the “Ichiroll.” 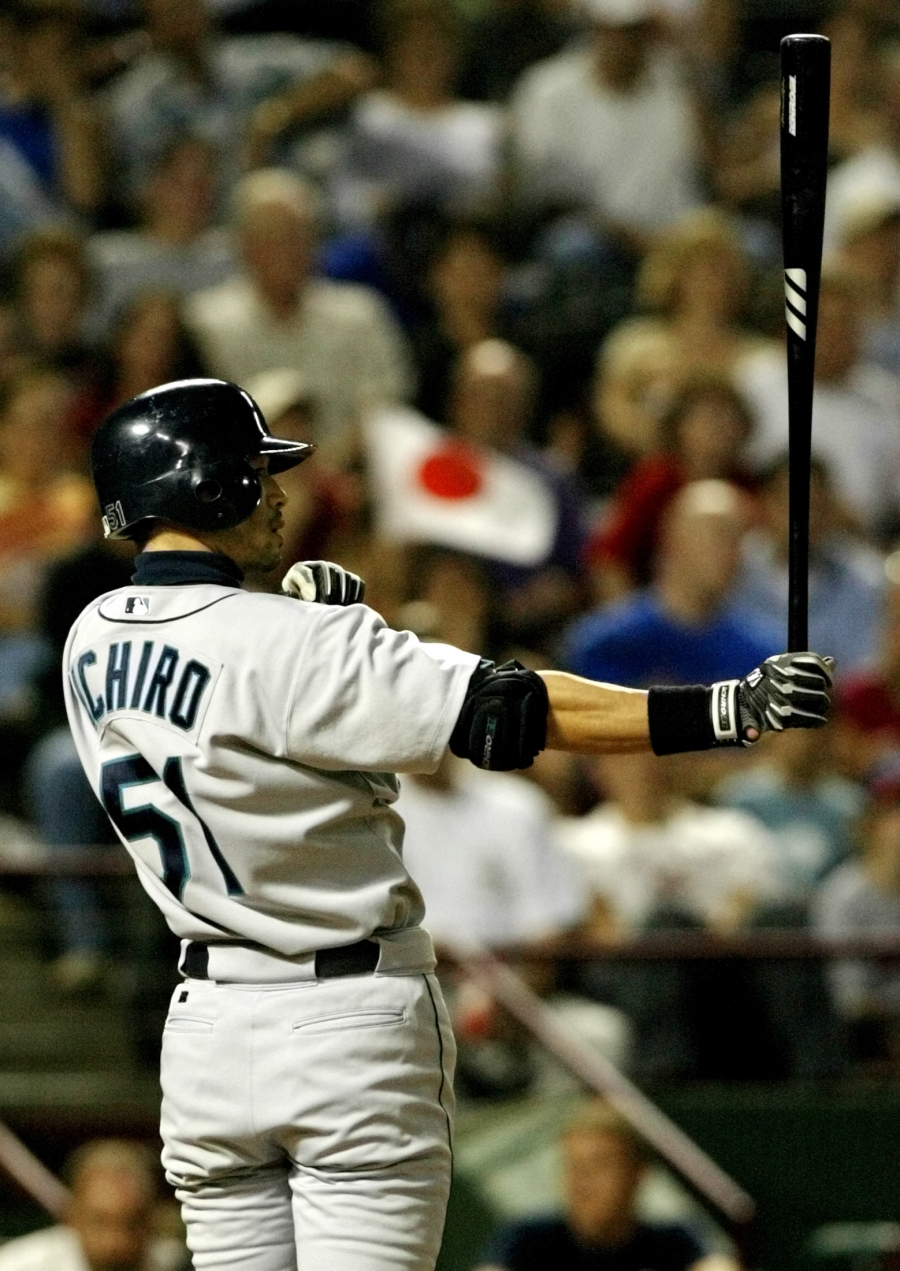 Seattle Mariners outfielder Ichiro sets up in the batter's box as a fan waves a Japanese flag in the background at a game against the Texas Rangers in Arlington, Texas, Sept. 24, 2004. Ichiro would break the record for most hits in a single season that year with 262, breaking a record that had stood since 1920.

Ichiro was a bright spot in Seattle during some pretty lean years. The Mariners haven’t sniffed the playoffs for 17 straight seasons, the longest drought among all four major North American professional sports leagues.

The awards, the big hits, the spectacular defense brought some sizzle to the Pacific Northwest. Even the most mundane Ichiro moments, explains Ahna, captivated fans: “His meticulous stretching.”

That might sound kind of crazy, but in Seattle’s bleachers, fans were mesmerized by Ichiro’s routine to stay limber in-between pitches. For Ahna — never one to dole out praise for a Mariner’s front office that’s brought him so little joy —  he’s glad the team is giving Ichiro a curtain call in Japan.

“I think it’s fantastic that he’ll have the opportunity to play in front of the home crowd. I think it is a fitting end.”

As for Ichiro, he’s said that he’d like to play until he’s 50. But the fact is, at age 45, he’s just not playing well anymore, managing to get only two hits in 25 at-bats during spring training.

On Saturday, a reporter in Tokyo asked him when he’d know it was time to retire.

Speaking through an interpreter at a press conference on Saturday, Ichiro said these games in Japan are a “great gift” and that he’ll remember every moment in Japan. Ichiro also said, “You can be told anytime you are gone … but I’m battling, and I’m still here.”