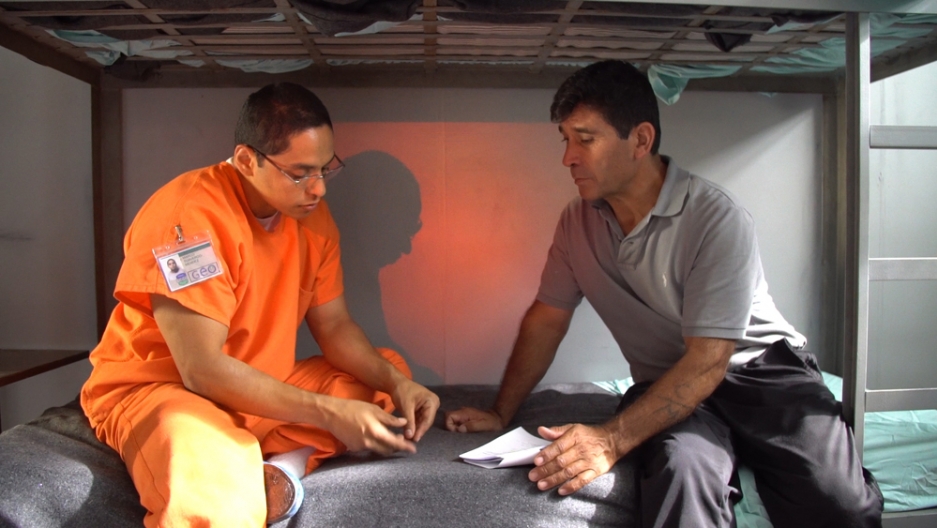 The new film "The Infiltrators" is a bold experiment by immigrant advocates. It tells the story of two young undocumented immigrant activists who were detained by immigration enforcement agents in 2012.

But there's a twist: Those two immigrants got themselves thrown into detention centers on purpose. Their goal was to gather information from detainees that could help get them released. And they concluded they could only get that info by being inside the detention center themselves.

To do that, Marco Saavedra and Viridiana Martinez turned themselves into Immigration and Customs Enforcement (ICE). They were sent to Broward Transitional Center, a sprawling for-profit facility in Pompano Beach, Florida, where they started organizing the detainees. Waiting on the outside to coordinate the campaign was Mohammad Abdollahi, an undocumented immigrant and activist who worked closely with Saavedra and Martinez.

The film documents how this was all achieved with a mix of on-camera interviews and reenacted scenes.

Their goal is to help give a voice and attention to some of society's most vulnerable immigrants, such as Claudio Rojas, who was recently apprehended and ordered to be deported in what appeared to be retaliation from the Trump administration for speaking out.

"We grew up in this country, we speak two languages, we can navigate in and out of spaces that maybe our parents and other folks that are more vulnerable than us in the community can't," Abdullahi said. "It's because of that privilege that we saw it as our responsibility to just go to the source of where people are detained. Instead of sitting out here one by one, by one fighting these deportation cases, let's just go right to the source."

Mohammad joined The World's Marco Werman to share why he and the rest of the crew took on this risky project.

The World: Mohammad, you're undocumented, born in Iran. What was your role in this effort?

Mohammad Abdullahi: We internally would joke with Marco and Viri that they had the easy job; they were inside. On the outside, we were answering calls from 7 a.m. to 11 p.m. We were coordinating with family members, we had a whole team with the National Immigrant Youth Alliance, people all over the country, and other undocumented youth that were part of our network that were working on petitions, contacting family, and reaching out to members of Congress. My role was the coordinator between both worlds inside and out and to ensure that Marco and Viri got out safely.

What made the undocumented activists like Marco and Viri, who voluntarily went into detention, so certain that they'd be able to get out themselves? There is this one moment where Marco is the detention center and he sees this board with everybody with the red, yellow, and green little pin next to their name. That suggests when they're going to be deported, and Marco has a reaction like "Wow, I didn't know this was happening."

The confidence for us came from the place of having done cases just like our own where, as undocumented youth, had a whole campaign of civil disobedience. What we found is that the more public you are about your status and the more out there you are, the safer you are. Any of us can get picked up at any minute, and it's better to always be a phone call away from a group of folks that can help you than to be without someone to reach out to.

So, the premise is that you guys are going to stop deportation, one immigrant at a time. The key to that mission was getting the detainees to sign a privacy waiver. What did that allow you activists on the outside to do?

The goal of having a privacy waiver is to be able to bring some light into the detention center. Otherwise, Immigration refuses to talk to the media about people's cases. They refuse to talk to members of Congress about people's cases. So, the privacy waiver lets us open up the detention center and be able to expose the abuses that are happening inside these facilities that only can operate if nobody knows what is actually happening.

I don't want to spoil the end of "The Infiltrators" for our listeners, but I do want to follow up on one character here, Claudio Rojas. One reason that project actually began is because Rojas' son asked for your help in getting his dad out of the Broward Detention Center. Your pressure campaign won. Rojas was released, but now he's back in detention again. What happened?

Claudio was released August of 2012 and he was doing regular check-ins. Every year he would check in with ICE. There was a period of time where he had an ankle monitor. He's always complied with all of his check-ins. So, this year on February 27th he had a check in. It was three or four days before the Miami premiere of the film "The Infiltrators" and when he went into this check-in, they detained him. He was there for four hours. For us it's a very clear sign that this is retaliation by the Trump administration because the local ICE officers there that normally deal with told Claudio that this decision comes from above them. This is very heart-wrenching for us because this year he actually has a visa pending as a victim of labor trafficking. He's at the Krome Detention Center, it's a notorious detention center, I think it used to be a Cold War military base.

Now he's a 53-year-old man. He just welcomed his first grandchild two weeks ago. There's no reason why he should be in that detention center, other than that the administration is trying to use him as a vessel to send a message to all of us that we need to be afraid. ICE has said that they intend to deport him on March 30. What this case comes down to is that the Trump administration is only allowed to retaliate because there's so much silence. We don't have any members of Congress right now that are stepping up and saying "I'm going to go visit Claudio in detention. I'm going to take action." That's what's really lacking. In that silence that exists, in that void, is when things like this are allowed to go forward. Once these detention centers are open and people see what's happening inside, it will absolutely give you nightmares.

President Obama was called the "Deporter-in-Chief." The headlines under Trump have eclipsed the Obama period though. In reality, what has changed?

We always joke that people finally care about us as immigrants under the Trump administration because he's so vocal about what they're doing. He's so vocal about separating children. These are all things that we witnessed under the Obama administration and we were screaming into the void. We had to literally send ourselves into detention centers to be able to show people the type of people getting deported and now under the Trump administration, people actually care. They're actually listening and they're looking for the information. Our communities can remain safe if we're at the forefront.

Mohammad, you took part in a really daring, pretty brave kind of guerrilla-style campaign to raise awareness of all these things facing undocumented immigrants. As an Iranian, do you worry that you could be deported?

I'm gay and from Iran. I think I can manage a pretty solid campaign on my behalf, should the administration try to come after me or should I end up in deportation proceedings. What I believe in is that because of the agency and privilege that I have, it's my responsibility to be more out there and also for us to be able to find other ways to help other people.