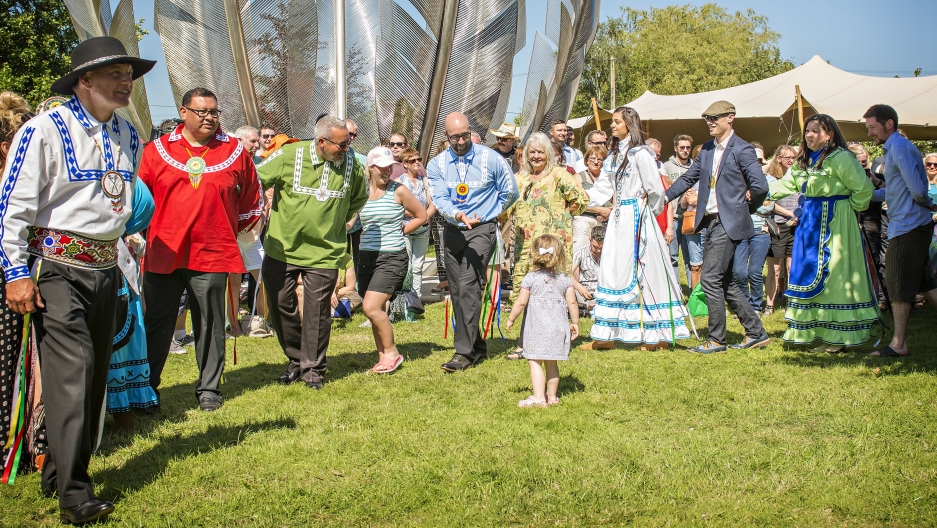 Choctaw Chief Gary Batton leads dancers at the dedication of the Kindred Spirits Sculpture County Cork in Ireland in 2017.

Courtesy of the Choctaw Nation

There’s a sculpture in Midleton, Ireland, made up of oversized steel eagle feathers — they're 20 feet tall — arranged in a circle, kind of like a bowl. The structure honors historic ties between the Irish and the Choctaw Nation of Oklahoma.

The bond between the Choctaw and the Irish goes back more than 170 years to the potato famine in Ireland — one of the worst famines in history — when the potato crop failed over consecutive years. Over 1 million people died, and the crisis prompted one of the first worldwide relief efforts.

Judy Allen grew up with the story of how the Choctaw people heard about the starvation overseas in Ireland. Allen is the historic projects officer for the Choctaw Nation of Oklahoma. The Choctaw donated $170 to the Irish back then — that’s the equivalent of about $5,000 today.

“The Society of Friends, commonly known as Quakers today, had told the story of the starving Irish during the year 1847,” she said.

“And when the Choctaws heard it, even though it had only been 16 years since their own Trail of Tears — [involving] dire impoverishment and starvation … many of our people died along that Trail of Tears — our Choctaw people felt such tremendous empathy.”

“And when the Choctaws heard it, even though it had only been 16 years since their own Trail of Tears — [involving] dire impoverishment and starvation … many of our people died along that Trail of Tears — our Choctaw people felt such tremendous empathy.”

The Trail of Tears occurred between 1831-1877 when the Choctaw and members of several other tribes were forcibly marched by the US government from their homeland in Mississippi to modern-day Oklahoma. Thousands of Choctaw died along the trail due to the extreme cold and harsh conditions.

Allen says that experience moved the Choctaw to donate what they could to the Irish.

“Choctaw people had experienced such great loss,” Allen said. “We had to leave our homes forcibly, and they had lost people that they loved. They'd lost family members, they had lost everything that they had. They had frozen to death, they had been starved to death.

“And when they heard about this other race of people that were experiencing the same loss ... That was not at their own hand, and it was unnecessary — just as the Choctaw people's loss was what they considered unnecessary — they wanted to help.”

It made headlines in Ireland. Historian Turtle Bunbury wrote a book about that year, “1847: A Chronicle of Genius, Generosity and Savagery,” and remembers this story sticking out.

“Well, it got a lot of coverage in the British and Irish press at the time because it's so extraordinary that this donation [came] from very far away; most people who, you know, didn't have anything, immediately obviously connected to the Irish experience,” Bunbury said.

At the time, some in the United States attributed the Choctaw’s generosity to their exposure to Christianity. One Oklahoma newspaper went so far as to say the Choctaws were repaying the Christian world for bringing them out of “benighted ignorance and heathen barbarism.”

But in Ireland, Bunbury says people saw the ties to the Choctaw in a different way because of their treatment by a colonial power.

“A lot of other Irish were neglected very badly, pushed to the west and to the barren lands in the west of Ireland, dispossessed of their own ancestral lands. It's a very similar story, you know, in that regard.”

Historians on both sides have written about the Choctaw donation to help in the famine. In recent decades, that relationship between the Choctaw and Irish has been renewed.

In 1992, an Irish delegation walked the 600-mile Trail of Tears to raise money for world hunger. In 1990, the Choctaw did a hunger walk in County Mayo, Ireland. Allen was on that walk.

“It was a wonderful experience. And we were greatly honored while we were there,” she said.

She said people were familiar with the story and that the gift of the small amount of money was legendary.

“We felt like we were royalty while we were there because people were so appreciative of the gift.”

“We felt like we were royalty while we were there because people were so appreciative of the gift.”

Two years later, Allen returned to Ireland with members of the tribal council where they were presented with a plaque commemorating the gift. The president of Ireland at the time, Mary Robinson, became an honorary Choctaw citizen.

And then there’s that giant set of steel eagle feathers dedicated two years ago in County Cork.