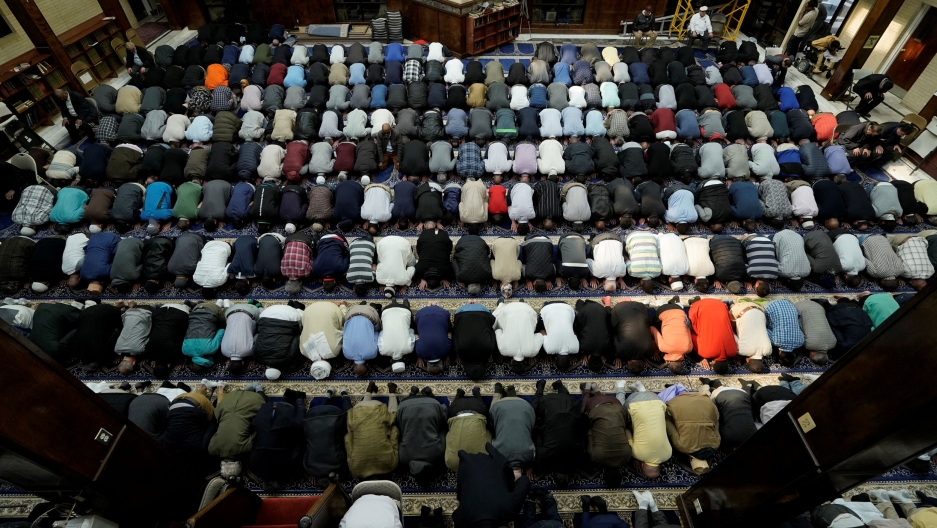 Members of the congregation pray during a Friday prayer at Dar Al-Hijrah Islamic Center in Falls Church, Virginia, after the attacks on two mosques in New Zealand killed 49 people.

Mosques around the United States increased security measures for Friday prayers after a gunman shot dead 49 people and wounded more than 40 at two New Zealand mosques.

Police in New York and other cities said they were stepping up patrols at mosques and other places of worship as a precaution, although there was no sign of any specific threat.

Nihad Awad, head of the Council on American-Islamic Relations, said at a Washington news conference that he urged Muslims praying at the more than 3,000 mosques in the United States "not [to] abandon your mosques."

For years, American Muslims have grown accustomed to police patrols, active shooter drills and private security officers guarding mosques for Friday prayers. Security is often ramped up after mass shootings, some of which have taken place at houses of worship, including churches, a synagogue and a gurudwara.

CAIR, the largest Muslim rights group in the United States, said Muslims and other minority groups had faced a surge in bigotry since Donald Trump won the 2016 US presidential election. A CAIR statement blamed this in part on what it described as "Islamophobic, white supremacist and racist Trump administration policies and appointments."

The accused gunman's manifesto posted online praised Trump as "a symbol of renewed white identity and common purpose." The White House did not respond to a request for comment.

"Mr. Trump, your words matter. Your policies matter. They impact the lives of innocent people at home and globally."

"Today, the terrorist has quoted the most powerful person in the world, President Trump," CAIR's Awad said at the news conference. "And I would like to address Mr. Trump: Mr. Trump, your words matter. Your policies matter. They impact the lives of innocent people at home and globally."

Tahira Amatul-Wadud, a board member with the CAIR in Massachusetts, explained to The World's Marco Werman what it was like to wake up to the tragic news from New Zealand.

Tahirah Amatul-Wadud: I think the initial reaction has been shock and then horror because as details come out, it's my 17-year-old who breaks this news to me this morning as to how many casualties there were and how real this was for her. Even though it's a world away, the attack was designed to be in our faces and that is actually the result that we're seeing. It feels like it happened right here, right down the street, in some ways.

"It feels like it happened right here, right down the street, in some ways."

Marco Werman: One of the roles of religion, of course, is to bring people together. On a day like this, do you sometimes just want to crawl away and not be a part of anything?

No, especially with my experience dealing not only with anti-Muslim sentiment but watching this growing rise of the anti-religious sentiment. I recognize that people want to be together when these things happen. When the attacks happened in Pittsburgh in the synagogue, people came together in vigil. When Dylann Roof massacred black worshipers in the south, people came together in vigil. That's what I see and I think that's also what's healthy for people.

But is it safe to be together?

I'm curious to know what you think of this one detail from New Zealand that really struck me: the police there telling members of the public to stay away from mosques because of security concerns. Do you worry that's letting extremists have their way?

Oh, I think it certainly does. The thing is that it also compounds isolation. I think that becomes the tragedy. Without having a strategy behind why you might say to someone "don't gather at this moment," it seems like you're giving into fear and that I reject.

"The greatest threat to the United States of America is white supremacy."

You're an attorney, Tahirah, and you represent Islamberg, a Muslim community in upstate New York that has been threatened by white supremacists and we're seeing this narrative again in New Zealand, we believe. Are governments doing enough to address white extremism and white supremacy?

The greatest threat to the United States of America is white supremacy. It is white nationalism. We're seeing that manifest here in our country but we're also seeing it manifest globally and we need to, as a citizenry, push and support our public officials and push and support our Department of Justice in identifying and pursuing the proper threat. So no, the government is not doing all that it can do. It needs to fund and continue the research and continue to root out white supremacy wherever it exists and particularly where it poses a violent threat to other Americans and people throughout the world.

Today being the Islamic day of prayer, can I ask you what you're thinking about and praying for today?

I'm thinking about my children, who go to a very small Muslim school and on Fridays, they open the doors to the public for Jummah [Friday] prayer. I would not be telling the truth if I told you that I wasn't worried ... but I don't let fear keep me from sending them to school. But yeah, it's a scary thing.

This interview was edited for content and clarity. Reuters contributed to this report.