As February gives way to March and the nights grow longer at the bottom of the world, the sea around the Nathaniel B. Palmer is starting to freeze up.

The National Science Foundation-chartered icebreaker is wrapping up its trip to Thwaites Glacier, on the west coast of Antarctica, where an international group of scientists is on an eight-week expedition to unlock the secrets of why, and how fast, the Florida-sized glacier is melting.

But ice is not just what the scientists here are studying. It’s also what controls where, when — and even if — they can do their work. 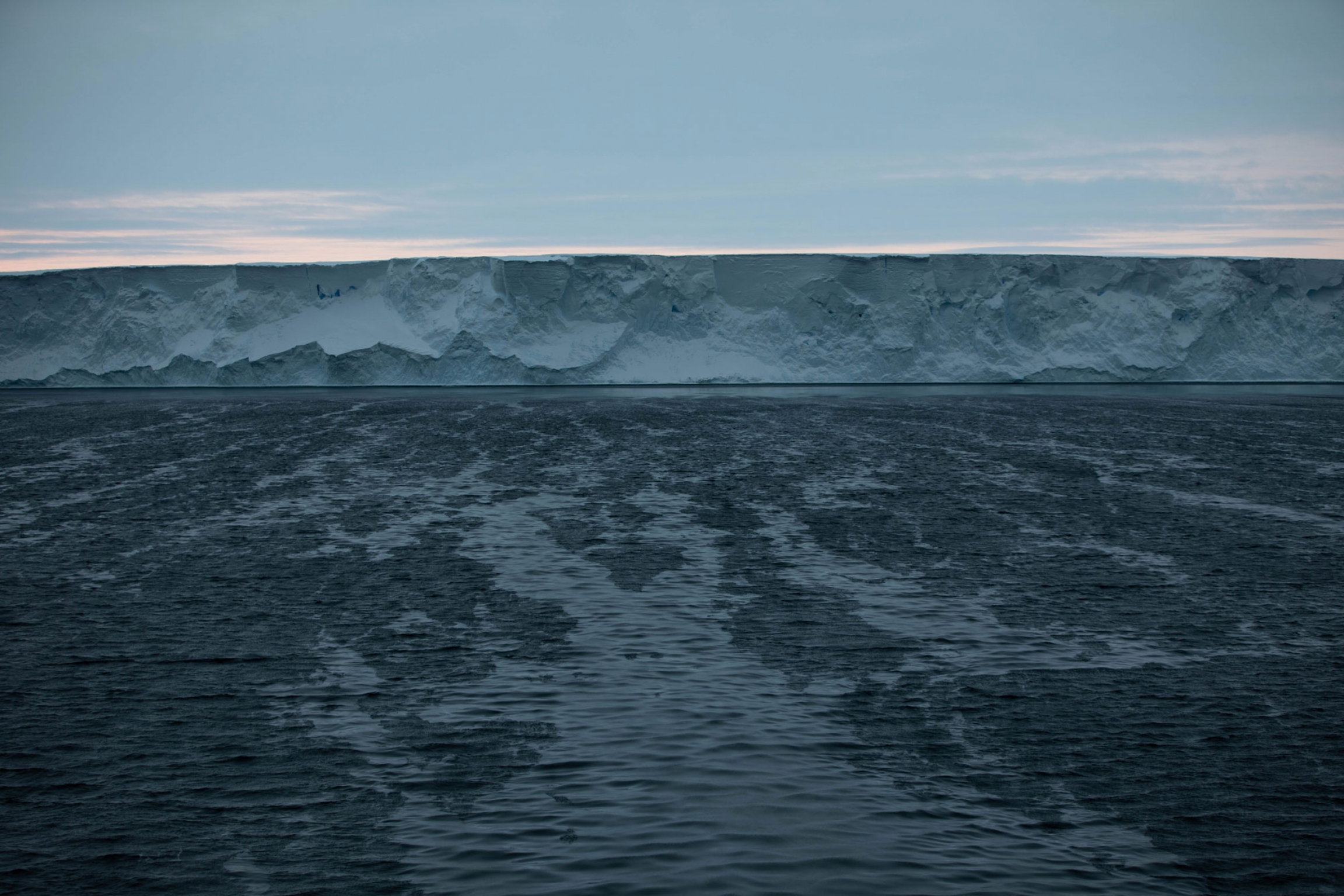 As the Amundsen Sea freezes up and winds move old ice around, this refreezing has already prevented the Palmer from reaching areas clear for passage just days before.

On Wednesday, the captain of the Palmer and science team leaders decided to start heading north a few days ahead of schedule after a final study site was blocked by ice and satellite images showed the passageway out of the Amundsen Sea growing narrower. 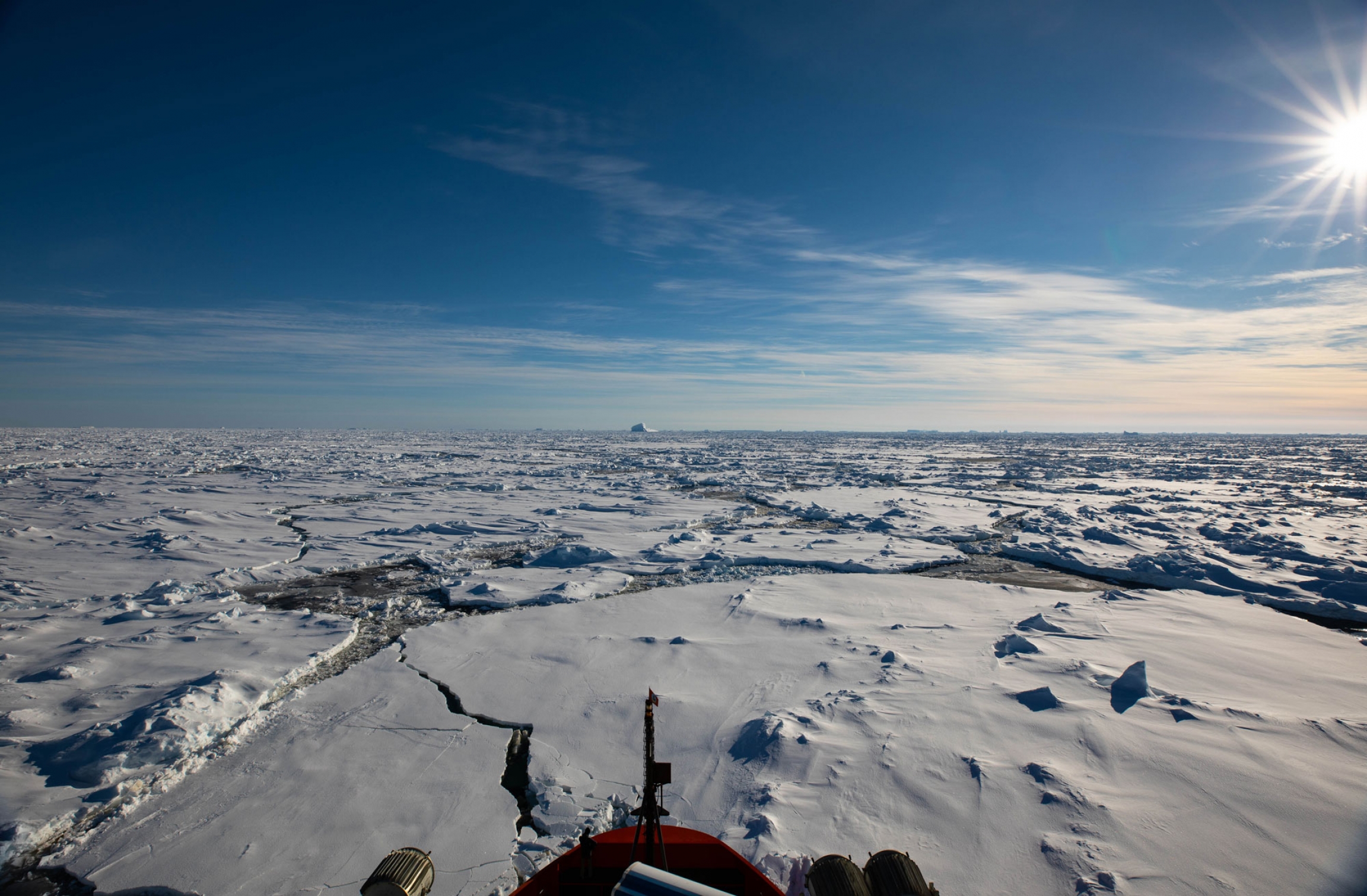 The Nathaniel B. Palmer breaks through ice floes during its southward transit.

The seawater here is always close to freezing, and the whole top layer of water must reach that temperature before the surface layer starts to solidify. That means a small drop in temperature or a strong wind blowing off the frigid continent can prompt ice to form fast, growing up to five inches thick in just two days. 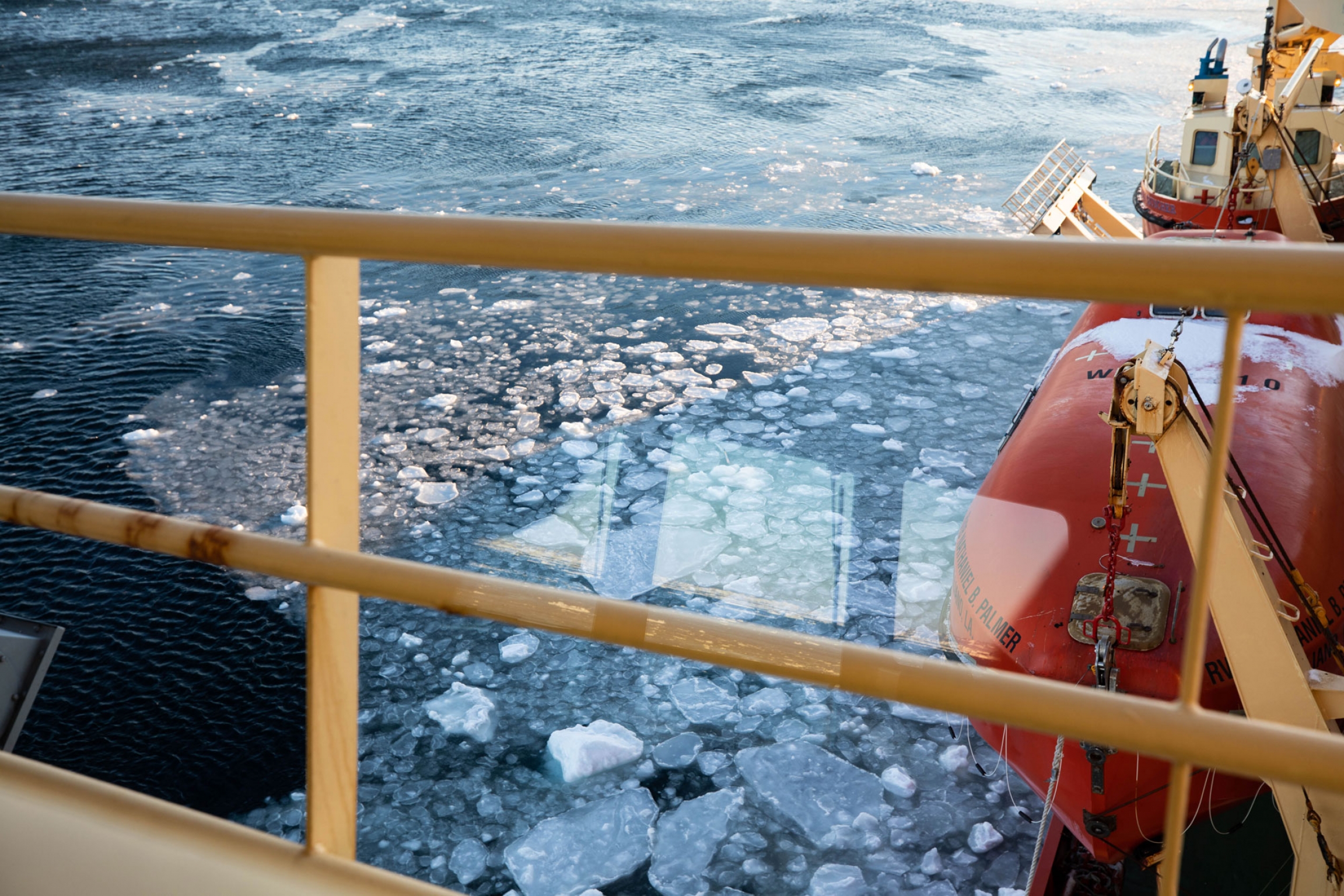 This rapid freezing has added an extra challenge to safely lifting autonomous gliders and submarines from the sea over the past few weeks.

Sea ice formation, as explained by Nathaniel Bowditch in what’s commonly known as the mariner’s bible (officially titled American Practical Navigator) starts when tiny, needle-like crystals called spicules or frazil ice form in the top inch or so of seawater. 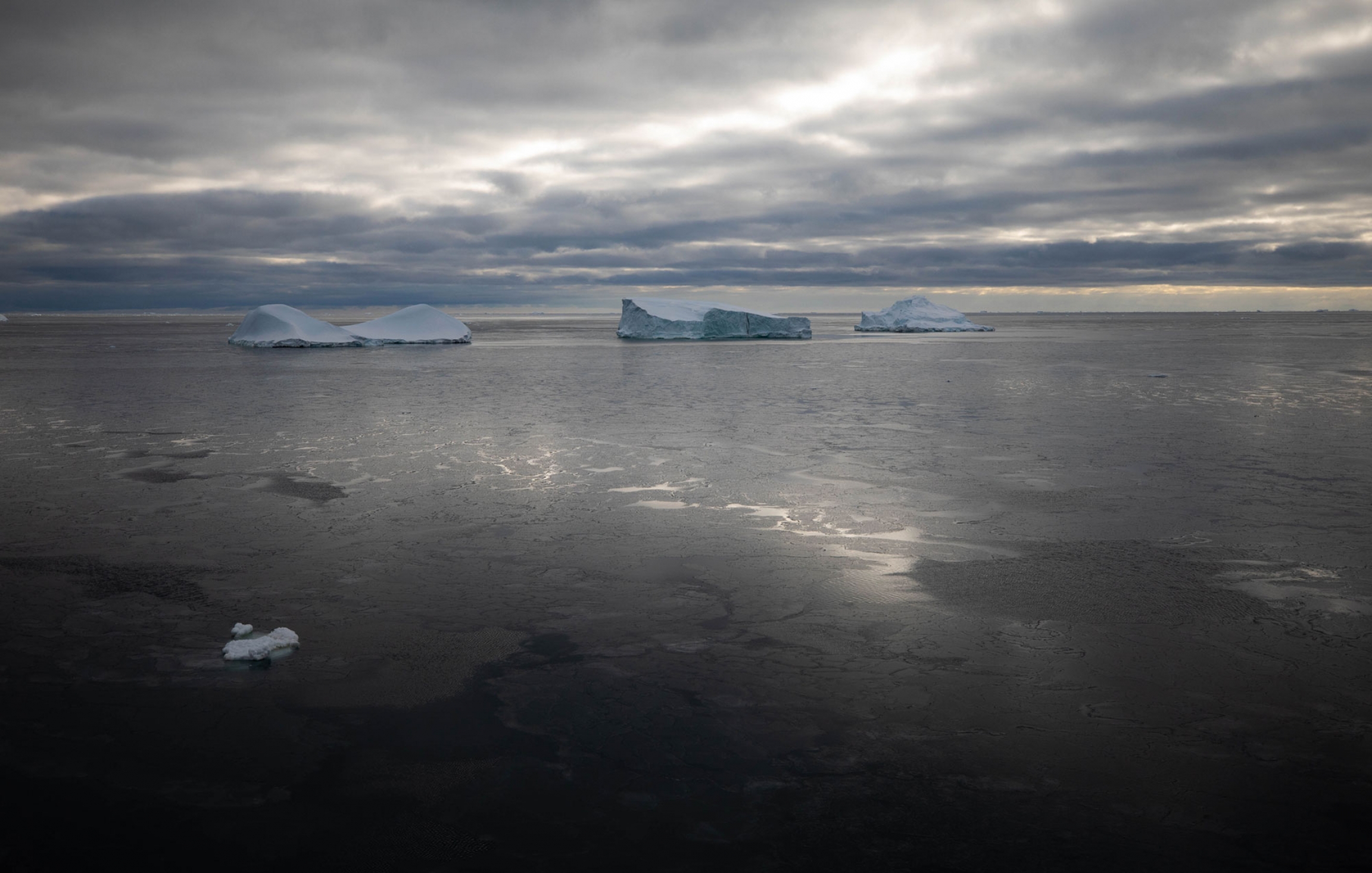 Grease ice turning to shuga on a still day.

When these crystals are blown together by winds and currents, they form matte streaks called grease ice, which look like an oil spill and subdue the effects of wind and waves on the surface of the water.

Next comes shuga ice — so called, says the Palmer’s captain Brandon Bell — because it looks like sugar thrown into water that didn’t dissolve, a soupy opaque layer of ice crystals and small ice chunks that floats on top of the water and dampens the waves even further, making the water unearth it undulate. 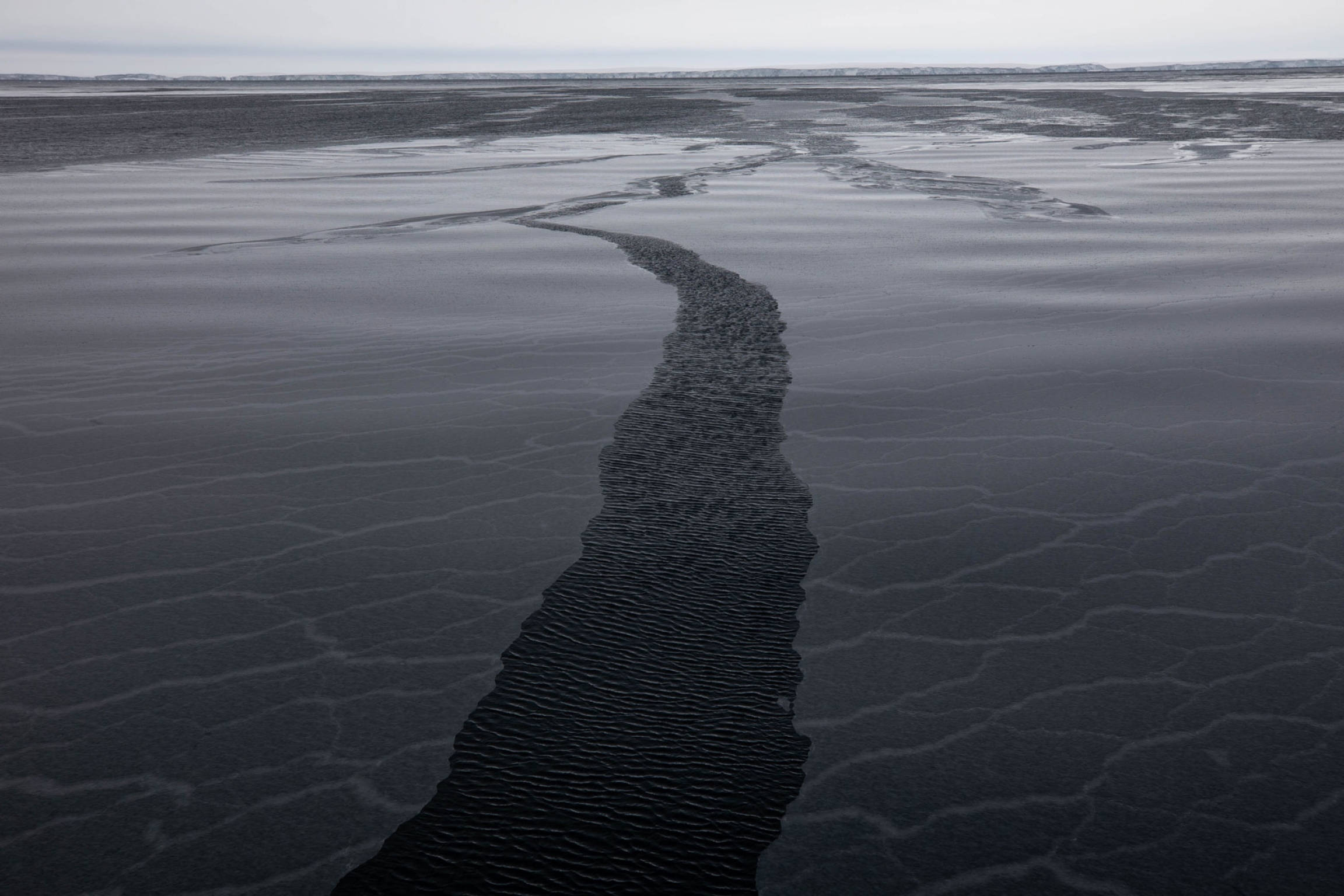 The wind cleaves a break in new ice on a gray day in the Amundsen Sea.

Temperature, wave action and salinity control how new ice progresses from shuga to older, thicker, more brittle ice, but in this part of the Amundsen Sea, the next stage is often the formation of disks of ice, tiny at first, looking like cells or tiny lily pads, that grow larger until they’re classified as pancake ice. 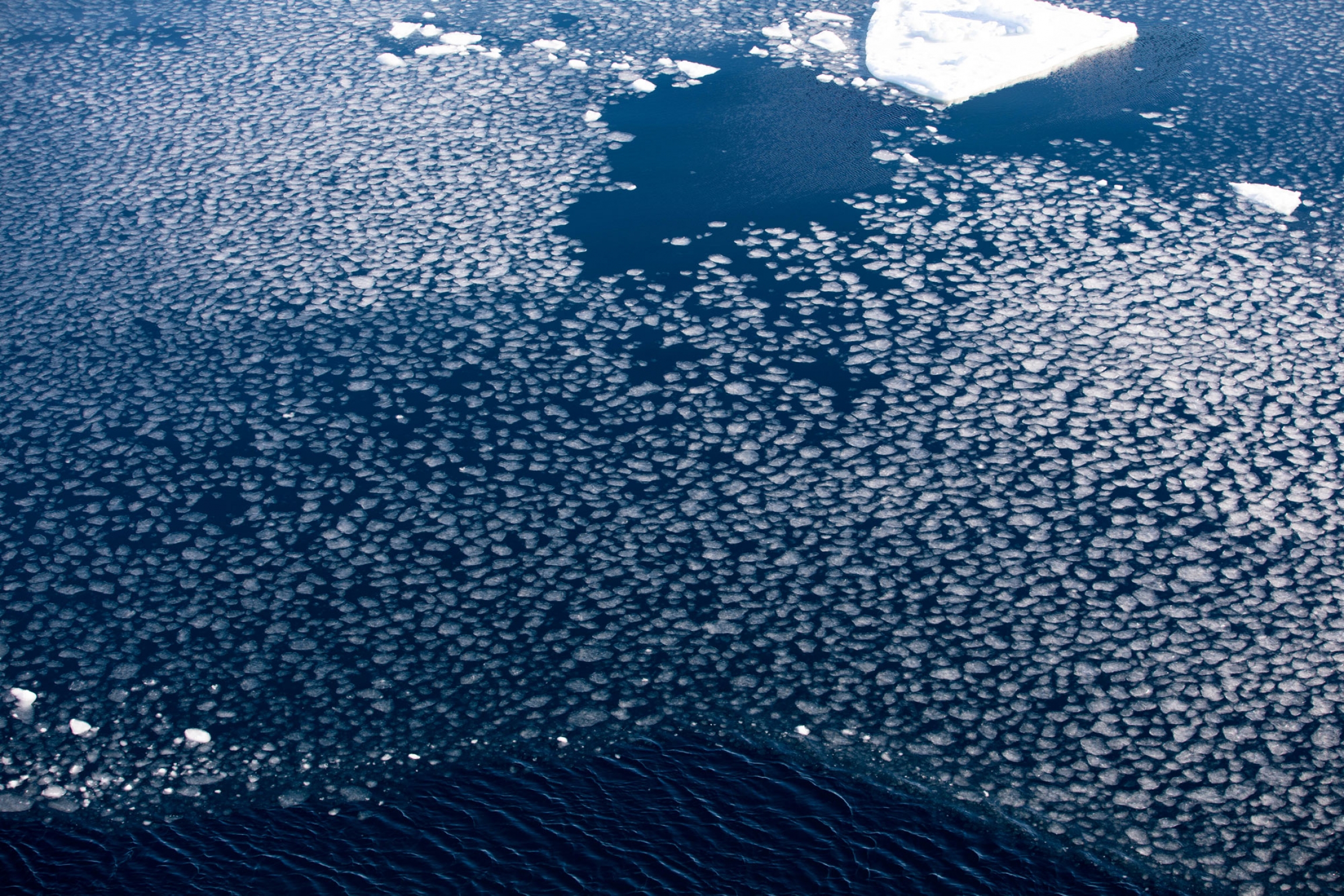 Pancakes, circular pieces of ice formed when wind and waves break up new ice and abrasion rounds off its edges, start to form here.

“As it gets colder and colder, the water is trying to freeze into a sheet, but there’s movement, so it’s breaking that sheet apart, and you get these little chunks of ice,” says Joee Patterson, a marine technician on the Palmer who’s on her ninth voyage to Antarctica. “As they get tossed and blown by the wind and current, it rounds off the edges a little bit.”

“One of the things that’s really distinct about the pancakes as they start forming is that the edges are sort of curled up because they’re kind of crashing into each other,” Patterson said.

If temperatures stay low enough, the pancakes, which can be up to nine feet across, can join together and freeze into ice cakes, larger ice floes, and, once they’re several miles wide, ice fields. 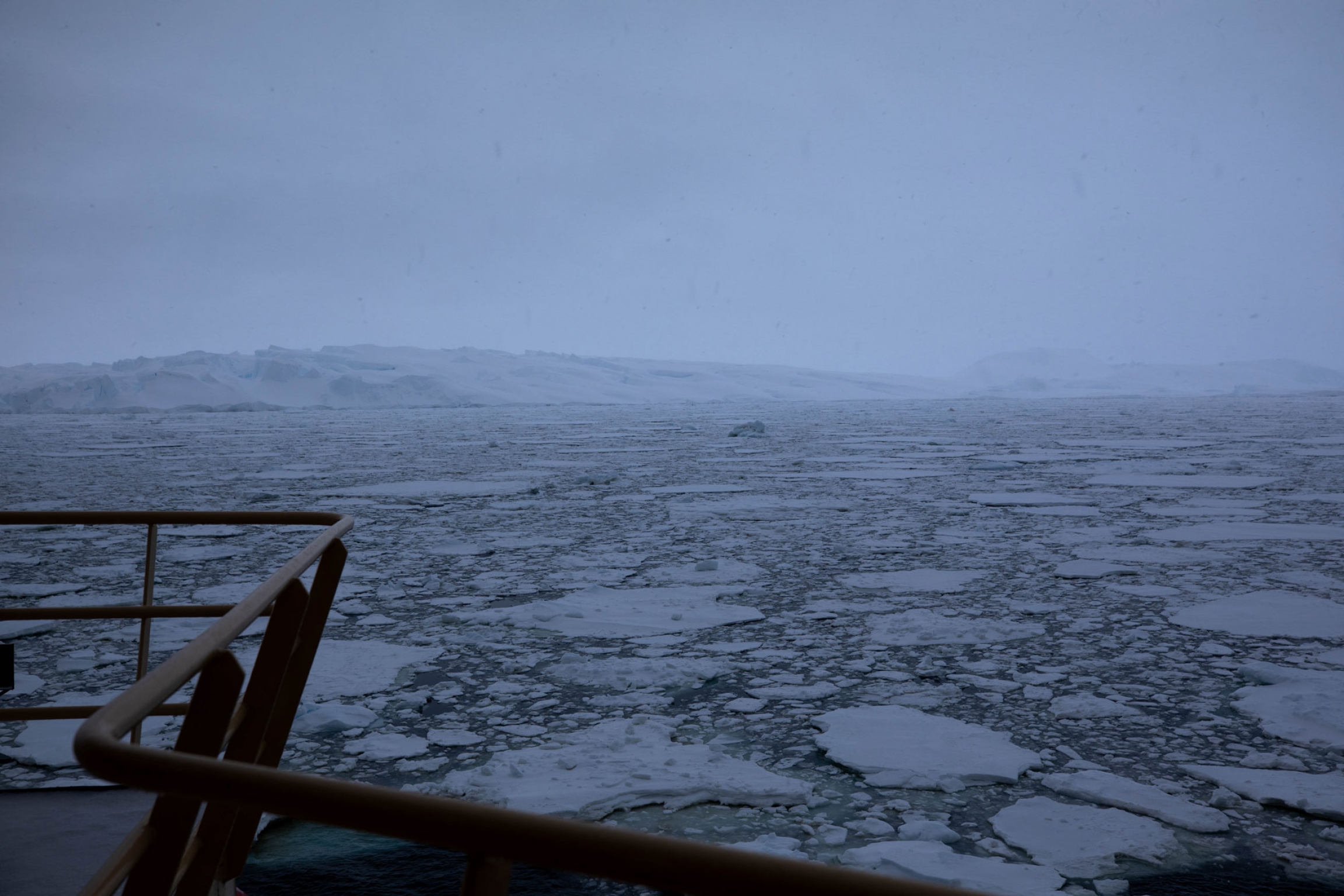 When it’s young, these large pieces of ice can still be flexible.

“You can actually see the sea swell moving under the ice field. It’s very disorienting, and kind of gives you a sense of vertigo because the ground is gently rippling underneath you,” Patterson said.

These relatively flat sheets of new ice regularly grow up to six feet thick in their first year. If the ice survives the next summer’s warmer days and round-the-clock Antarctic sunlight, it’s then called second-year and then multi-year ice.

As it ages, ice gets harder and more brittle and the salt is squeezed out of it. (Ice that’s clear and has all the salt squeezed out of it is called bar ice, because it’s good in the kind of beverage not allowed on a dry ship like the Palmer.) 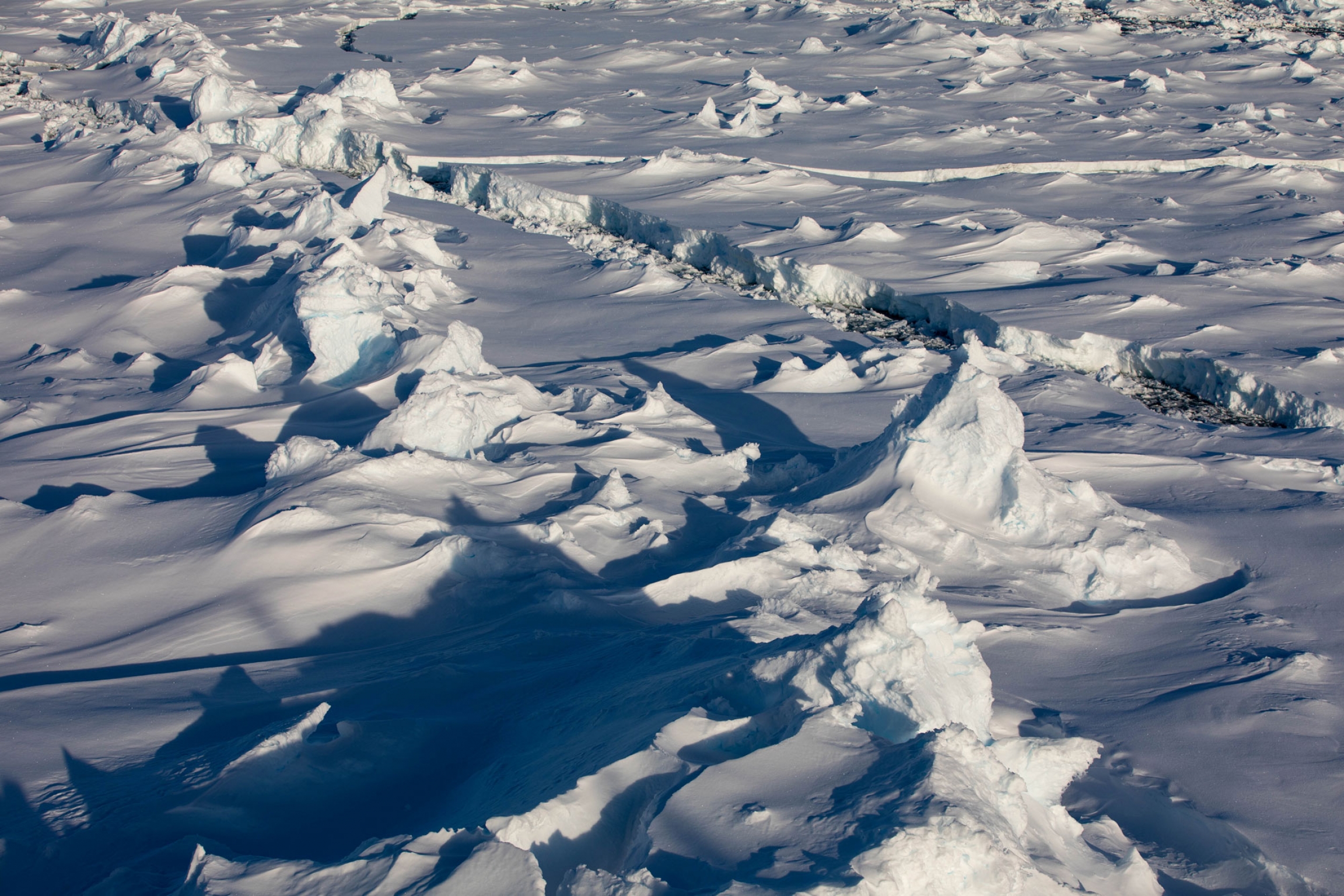 As it ages, pieces of ice crash into each other to form pressure ridges.

As the wind and waves crash pieces of ice together, they form pressure ridges that look like tiny mountain ranges made of meringue. Old ice, deformed in this way and growing thicker each winter from snowfall, is much harder — requiring more time and fuel — for a reinforced ship like the Palmer to break through.

As the ship turns north to begin the journey along the west coast of Antarctica, around the Antarctic Peninsula and to the southern tip of Chile, Captain Brandon Bell is keeping a close eye on the weather as far away as Australia, and on ice images supplied by the US National Ice Center, constantly on the lookout for pathways of open water to ease the trip home.