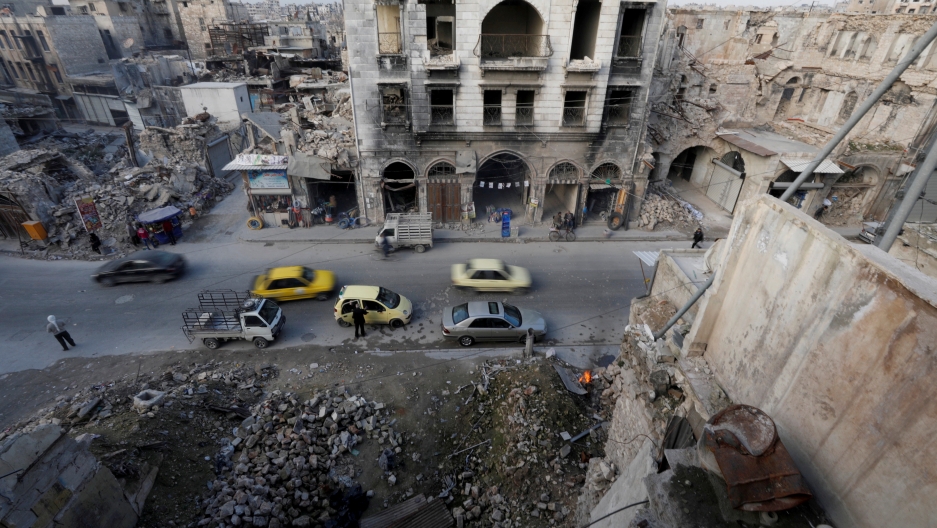 People and cars are seen in old town in Aleppo, Syria.

Eight years ago, a revolution began in Syria.

The protests spawned a civil war that has displaced millions, causing one of the largest humanitarian refugee crisis in modern history.

Back in 2011, Abdulkafi Alhamdo was an English teacher in Aleppo. He was one of the first wave of protestors in his city. When Assad's forces captured Aleppo in 2016, he fled with his family to the rebel-held city of Idlib. He has since bececome a father to two children. Abdulkafi spoke with Carol Hills about his experiences during the war and what he hopes to see change.

Carol Hills: Abdulkafi, take us back to 2011. Do you remember how you felt when you first heard about the protests?

Abdulkafi Alhamdo: At the beginning and now, by the way, I supported it and I joined it from the first day. In fact, everyone, every human being who liked democracy, who liked freedom, and who liked to live as a free man was very happy at the beginning of these protests. Although, it was dangerous and many of us were being arrested.

So it sounds like you basically stood up for what you thought was right. Almost eight years later, what has it cost you?

You know, the cost was more than we thought. We didn't think that the cost would be so high, because freedom was so close to us. The light was so close. So, I think that we really paid a very high price. But nevertheless, we don't regret it at all. I mean, if you asked me, "If you went back to eight years ago, would you participate in these demonstrations?" I would say "yes and yes and yes."

For you personally, what has it cost? What sort of losses have you suffered?

You haven't seen your family in eight years?

[Not] at all. Not my brothers, not my father, not my sisters. None of my family members at all. Even my house where I was brought up, I didn't visit that house again.

Have you lost family members or friends in the war?

You were from Aleppo but you now live in Idlib. Why were you forced to leave Aleppo?

Before 2016, we were living in Aleppo. That city, I consider a paradise on Earth, but Assad turned it into hell and we were besieged. We were destroyed. We were killed. [During the siege,] we were forced to eat things that you can't imagine that we could eat. We had to be displaced. I didn't move from that city because I wanted to. But, of course, if I chose to stay there, that means worse than hell, worse than displacement, because some of my friends stayed there and now all of them are either dead or imprisoned.

You have two children. Tell us about them. How old are they?

The oldest is Lamar. She's now 3 years [old]. We celebrated her birthday just on the 12th of February. And the other is Mohammad, six months old. Of course, Lamar was born in Aleppo and I hoped that she would be brought up there. If you can hear, I'm going to ask her "Where are you from?" and she is going to say "Aleppo," if it's OK.

Lamar, Where are you from?

Alhamdo: I always remind her that she's from there.

The war has been going on for eight years. Your oldest child is only 3. They've known nothing but war. What future do you see for them?

I mean, it's difficult. Of course, having had two kids makes me love life more and [I'm] trying to speak up more and to speak to the world and help more. Although, I know that it's useless because we know that no one will help us. But I hope that one day, we can live in Syria without the same regime because living in the same regime again is impossible. I want to live here and I want freedom here. Yeah, I might pay a price. I know that. All those who pass through [this] will pay a price and we pay this price for the next generation, not for ourselves.

What lessons have you learned from standing up and trying to fight for freedom. I mean, was it worth it?

Yeah, it was. I still remember when my father was always telling me "Please my son, keep silent. Don't say a word. Walls have ears. Please, safety is first. God willing, we are alive, that's what's most important." No, no, no. It's not the most important, for me. To live as a free man is the most important. To live with choice, to live where you can speak. Yeah, this is the life. But living without having any ability to speak and without having any ability to decide what you want or who should rule the country — this is not life. This is another kind of slavery, a new kind of slavery. This is what I believe.

Related: As Aleppo evacuates the battle for Syria has become a source of sad musical inspiration

What hope do you have left at this point?

This interview has been edited for content and length