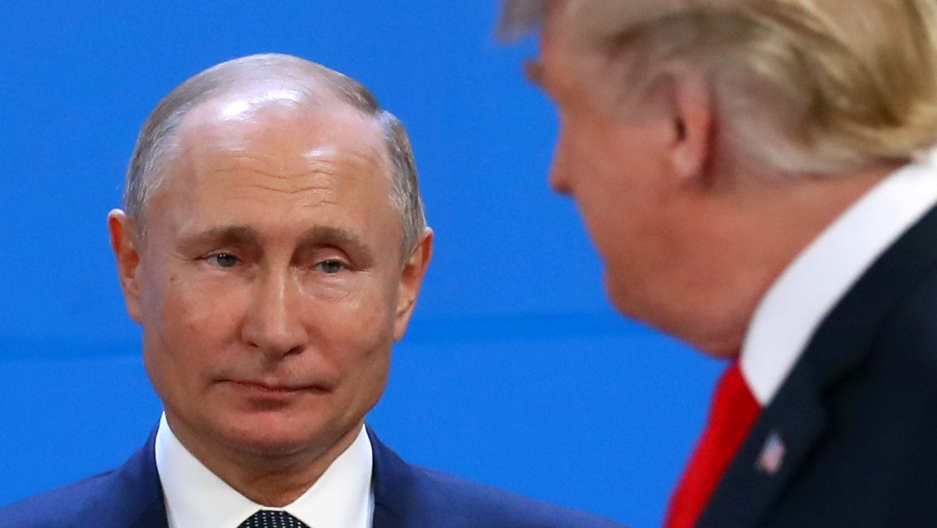 Russia's President Vladimir Putin and US President Donald Trump are seen during the G20 summit in Buenos Aires, Argentina Nov. 30, 2018.

Allegations of Russian meddling in the affairs of Western countries have been a persistent feature of Western politics since the Cold War. Claims of Russian interference in the 2016 US presidential election are only the most recent in a long series of suspected conspiracies across the past century or so. But Russian political discourse is also riddled with conspiracy theories. Everything bad that happens in Russia is traced back by some to one or another anti-Russian plot hatched in the West.

Even the collapse of the Soviet Union — a crucial point in world politics that left the USA as the only remaining superpower — was, according to some Russian conspiracy theorists, planned and executed by their country’s enemies abroad. My research, the first study of Russian conspiracy theories in the post-Soviet period, examines why these theories have emerged and gained currency in Russia.

It explains how the image of the “dangerous, conspiring West” provides national unity in Russia and has helped legitimize the country’s rapid turn to authoritarianism under Vladimir Putin.

What stands at the center of Russian conspiracy culture since 1991 is the idea that the Soviet collapse was a US plot. The speed of the collapse and the confusion with which it was perceived by Russia’s general population and its elites alike fed the popularity of the idea that what lay behind it was US and internal agents of “Western influence.”

Thus 1991 and the events that unfolded afterwards — the economic reforms and the decrease of Russia’s influence in the world — are treated as the high point of success in the West’s bid to destroy Russia.

It is important to note that conspiracy theories serve for some as an efficient way of interpreting power relationships in the modern world. They are great at explaining complex issues affecting us every day and can easily connect the dots and even provide relatively simple explanations for why a certain community — or, indeed, a whole nation — undergoes traumatic experiences.

Such turbulent times often give birth to gifted leaders who are keen on mobilizing the public by spreading conspiracy theories to gain popularity and political success. As American legal scholar Mark Fenster has noted, conspiracy theories possess an important communicative function by helping to unite audiences as “the people” against the imagined “other” — the secret “power bloc.” Thus Donald Trump and his political allies often talk about the “deep state” that stands in the way of his populist movement.

Populist calls such as this help those leaders who apply such divisions to polarize society and undermine their opponents by ruining their reputation or even justifying taking action against them.

This is what I have observed in post-Soviet Russia: anti-West conspiracy theories have become part of daily life, to a point where they can’t be treated simply as an element of paranoid people’s worldview. They were a very effective tool in the power battles that helped the Kremlin justify the authoritarian shift and the introduction of anti-democratic legislation in the first decade of the 21st century.

Conspiracy theories can mobilize the public and are useful in destroying the reputation and legitimacy of political opponents when their names are connected to the US government or intelligence services. Opposition leader Alexei Navalny and Golos (the NGO that monitors elections) are stark examples, having both been accused of fraud — and Navalny has repeatedly been arrested.

The conspiratorial reading of the Soviet collapse helps define the “us” among the Russian public who are loyal to the country and the “them” who welcomed the destruction of the USSR and benefited from it. In the 2007 parliamentary elections this is how the Kremlin depicted the liberal opposition that competed with Putin’s United Russia party.

What makes Russian conspiracy theories different is that, unlike in the US where they tend to spread from the grassroots to upper levels of society, in Russia this has been a top-down process. It’s common in the conversations with ordinary Russians to hear ideas they have heard from rank-and-file politicians, celebrity TV presenters or read in tabloids.

Russian political leaders are very careful not to spread these theories themselves — this role tends to be played by public intellectuals or low-ranking politicians with access to state-affiliated media. Presenters of weekly news shows, guests of numerous political talk shows and a myriad of authors. also help disseminate disinformation.

That’s not to say that leaders such as Putin don’t at times hint at conspiratorial ideas, helping them gain validity with ordinary Russians. When a worker from Novosibirsk in Siberia asked Putin in 2007 if he believed that former US secretary of state Madeleine Albright had suggested splitting Russia into several regions under international control, Putin admitted that, while he never heard it from Albright herself, he believed these ideas do exist in the minds of Western politicians.

Any conflicts or major international incidents involving Russia are given a conspiratorial spin to defend the Kremlin’s positions: take the Skripal poisoning — the very fact that the UK pointed a finger at the Kremlin (admittedly, with insufficient evidence) is seen as yet another proof that the UK government is Russophobic.

Having these themes bubbling away in the background certainly helps protect Putin’s control of Russia. Whether Russians will feel the same way once he is no longer in power (whenever that may be) is open for debate — but close to two decades of carefully nurtured anti-Western prejudices will play very nicely for any populists who may want to follow him into the Kremlin.