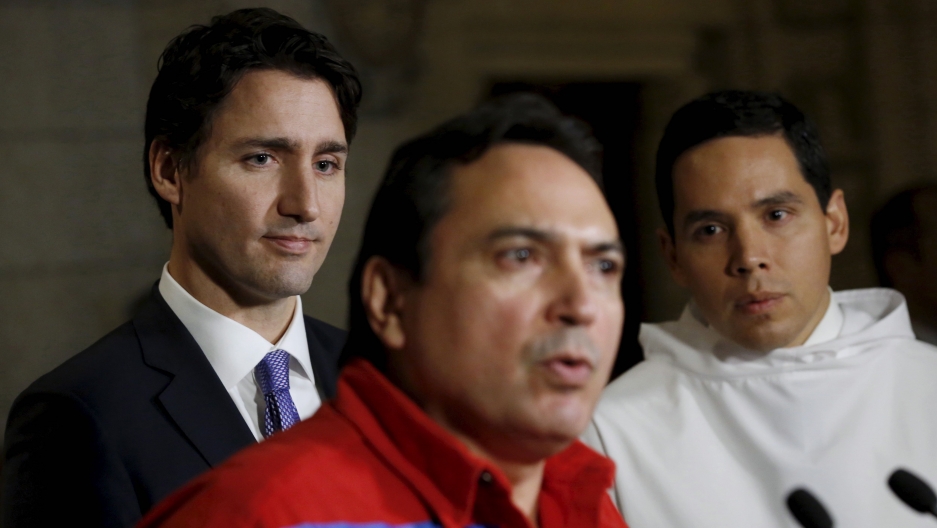 Jack Anawak was 6 years old when his mom was taken from their Nunavut home in northern Canada to be treated for tuberculosis.

That was in 1956. He never saw her again. After her death, Anawak says, he was left with the sense that he and his family didn't matter to the government.

Today, Anawak, a politician, still doesn’t know where his mother is buried.

Unfortunately, it's a story all-too-familiar for many Inuit people in Canada.

During a tuberculosis epidemic in the 1940s and '50s, thousands of Inuit people in Canada were separated from their families. Federally operated medical ships took people south for treatment. Many were kept for years in sanatoriums, and many died there. A lot of people still don't know what happened to their family members.

On Thursday, the Canadian government apologized for the mistreatment of families like Anawak's.

Prime Minister Justin Trudeau said: “Our government has said from the very beginning that there is no relationship more important to us than the one we share with Indigenous people. That remains true, and we will work hard to advance reconciliation each and every day.”

For Anawak, Trudeau's apology is only a first step.

“What I'm hoping to see through this apology is a concerted effort to look for the people that went down south and put a program together that will seriously look at finding those places so that we can have some closure,” he said.

It turns out there is a program in the works. It’s a government database called Nanilavut, which means "let’s find them." The database contains medical and other records that families can search to help locate their missing relatives.

Anawak hopes to use it to find his mother.

“I am looking," he said. "I have some idea where she might be, but I don't have the resources to seriously go all-out searching. So, that's what I'm depending on, this new program that will that we will be going on to do a concerted search.”

Others, though, say the government apology is too late, and they took to Twitter to express their lingering distrust.

My wife's father was sent south for TB treatment as a child. He returned to his home land as an adult who no longer knew his own family. He had to relearn his language and culture. It wasn't an easy path. He is on our minds very much today. #TB #Apology #Nunavut #Iqaluit

Musician Tanya Tagaq had this to say:

And still others say the apology is just a distraction from the troubles Trudeau is having in Parliament. Today, he denied interfering in Canada’s judicial system.

Madeleine Redfern, the mayor of Iqaluit in Nunavut, has a different view of the apology. She says it didn’t happen overnight.

“So, this is not something that just cropped up in the last week,” she told The World. “If anything, this has been a concerted effort to acknowledge that a significant amount of work is required to tackle this. The Inuit experience 300 times more tuberculosis rates than non-Indigenous [people].”

Tuberculosis is still an issue in the community. Redfern says it’s due to poverty and poor living conditions. Some families of 12-16 people are living in a house with only a few bedrooms. Redfern says a lot needs to be done to raise the standard of living.

“So, you know, the health response to eliminate and reduce tuberculosis is important, but at the same time, we need to see a lot more housing be built; that our children get educated; that people are offered training and skills.”

The database for finding missing relatives who never came back from treatment is expected to come online sometime next year.