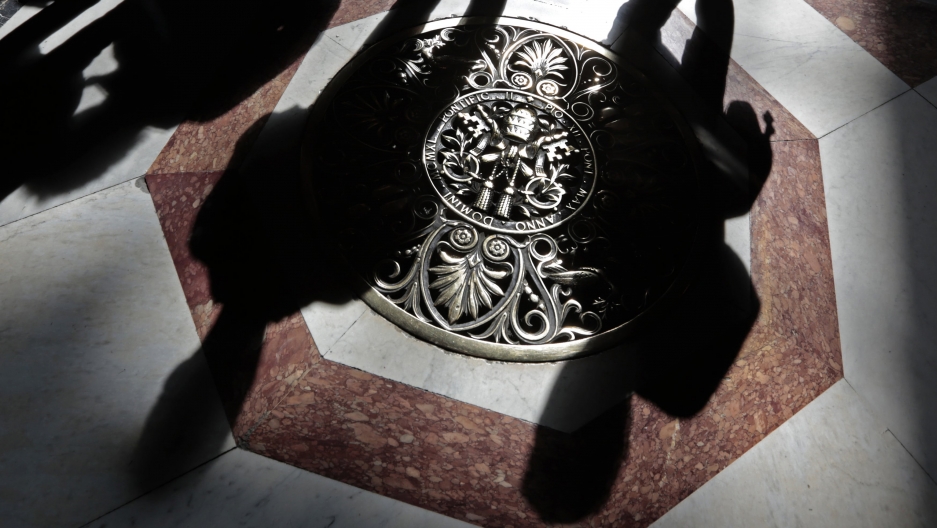 Shadows of tourists are cast across a papal crest dedicated to Pope Pius XII on the floor of Saint Peter's Basilica at the Vatican March 11, 2013.

Pope Pius XII — who led the Catholic Church at the end of World War II — has become among the most sensitive figures of the Vatican in recent decades.

People have long wondered why Pius XII did not speak out forcefully about the persecution and mass murder of European Jews. There have been demands since the early 1960s to open archives to see what actually happened during the war and what role the Vatican and the Pope played.

But, historians might know a bit more soon. Pope Francis announced this week that after a long process, he'll open many of Pius XII’s records to researchers next March.

"I'm planning to be on the doorstep [of the Vatican] on that day," says David Kertzer, author of "The Pope and Mussolini: The Secret History of Pius XI and the Rise of Fascism in Europe" and winner of the 2015 Pulitzer Prize for biography.

The World's Marco Werman spoke with Kertzer about what those documents might contain and what it could mean for the papacy.

Marco Werman: Who was Pope Pius XII and do you think we will learn whether or how actively he was doing Hitler's bidding?

David Kertzer: Well, he wasn't doing Hitler's bidding. So, that would certainly be putting it too strongly. There was a famous book by John Cornwell called "Hitler's Pope." And it had many important insights in it. But that title itself, I think, is misleading from the Pope's point of view. Pacelli [Pope Pius XII] was no fan of Hitler or of Nazism. The question is, how he might have tried to accommodate to Nazi rule. So the criticism against him wasn't that he was pro-Nazi, which he certainly was not. He saw Nazism as Pagan and in fact was worried that the Nazi regime was engaged in a battle against the Catholic Church in Germany. But he also was someone who was very diplomatic, and for various reasons, was not eager to publicly denounce the Nazi regime or its extermination of the Jews.

This is not recent history. Pius XII became pope 80 years ago. So how does that still reverberate today?

Well there's been a festering issue about what brought about the Holocaust. I mean, to put it in the broadest, starkest terms: How is it possible that in the middle of Europe, in the middle of the 20th century, there could have been the mass murder of millions of Jews? And what role — among other contributing factors — what role the churches and Christianity played, has been a big part of that debate. It was brought to a particular head by the fact that the Jews of Italy and the Jews of Rome, in particular, were victims of the Holocaust, as well. And perhaps the most dramatic evidence of this [is that] when the Germans took over Rome in the fall of 1943, they tried to round up all the Jews from Rome — rounded up over 1,000 of them. They put them in a holding building right next to the Vatican, in fact, and then they shipped them out to Auschwitz where virtually all of them were murdered. And the Pope never spoke openly against this. So this, more than anything, I think, symbolized the tensions, the raw nerves around the question of the Pope and the Holocaust.

With the unsealing of these archives, David Kertzer, could this be a reputational sea change for Pius XII?

Well the Vatican has made available a certain number of documents as a result of this pressure, although they haven't opened the archives. Pope Paul VI back in the 1960s, mid-60s, commissioned a group of four Jesuits to go through the archives — while no one else was allowed in. They selected out thousands of papers that they then published in 12 volumes. And those do give us considerable insight already. The other thing is, we have thousands of documents — those of us who do research on this — from the various ambassadors to the Holy See. For example, Mussolini had an ambassador to the Holy See, to the Vatican, as did France and various other countries. And we have their papers and they were meeting almost daily with either the Pope or people around the Pope. So it's not as if we don't have insight into what was going on during the war. Yet, there is a feeling that there may well be light shed on internal deliberations in the Vatican that we haven't yet seen but now should have available.

Pius XII is still a hero to Catholic conservatives. How do you think Catholics and the international community might react if they see what that light actually sheds?

Well, one thing one learns is how difficult it is to convince people to change their point of view based on actual evidence. And you have the defenders of Pius XII, I think, going to the extremes of not just defending him from being indifferent to the fate of the Jews — I don't think he was certainly indifferent and he certainly was horrified by the Holocaust — but then saying, "No, he in fact was great savior of hundreds of thousands of Jews." And this does strike me as going way too far in understanding what happened during the Holocaust.

I think the big question from my point of view is — and it rarely gets stated in this way — how was it that people who thought they were Christian, as most of these murderers thought of themselves as Christians, could murder Jewish women and children and still think they were good Christians? And what might religious leaders and Christian religious leaders so, Protestants as well as Catholic, have done to try to stop this?

Do you think there's any evidence in the archive that might help us understand the answer to that?

Well, yes. From my reading so far of the evidence, I think — and in this case maybe there's some parallel to the more recent pederasty sex scandal in the Church — that the perspective of the Vatican was largely [that] the first priority has to be to protect the institutional Church and everything else comes second. And the Pope was certainly worried that the Nazi regime would work against the Church, as it had in various ways — it had limited the influence of the Church in Germany and elsewhere, in Poland where it took over and Austria and so on. I think we may well find more documentation that will show that this is exactly the kind of consideration that was overriding the Pope's decision-making at the time.

The Vatican is also opening up records from the postwar period, which for Italy kind of begins in 1944 with the Allied troops liberating Rome.

David Kertzer, what are you eager to learn about Pius XII and Italy's transition out of fascism?

Well, this is, in fact, I think, where we might find the most surprising and new kinds of materials — not so much for the war, although I think there'll be plenty of interesting material there, as well. But remember, we already have thousands of documents that have been published by the Vatican based on the war years, whereas virtually nothing has been published or available about the immediate postwar period, which in Italy was dramatic. In Italy there was well-grounded fears that the Communists were going to come to power, which, from the Vatican's point of view, would be a total disaster. And so the Pope was undoubtedly working furiously behind the scenes to prevent this. But, at the same time, had to take the public position that the Vatican remained outside of partisan politics. So, exactly how this played out behind the scenes, I think, is going to lead to many revelations from these newly opened archives.

David Kertzer, you spent the better part of your life looking at and researching the Catholic Church and World War II. Have you booked your ticket already to go to the Vatican next March?

Well, they are opening the archives on the 81st anniversary of the election to the papacy of Pius XII — which is March 2, 2020. And yes, I'm planning to be on the doorstep on that day.

This interview was lightly edited and condensed for clarity.