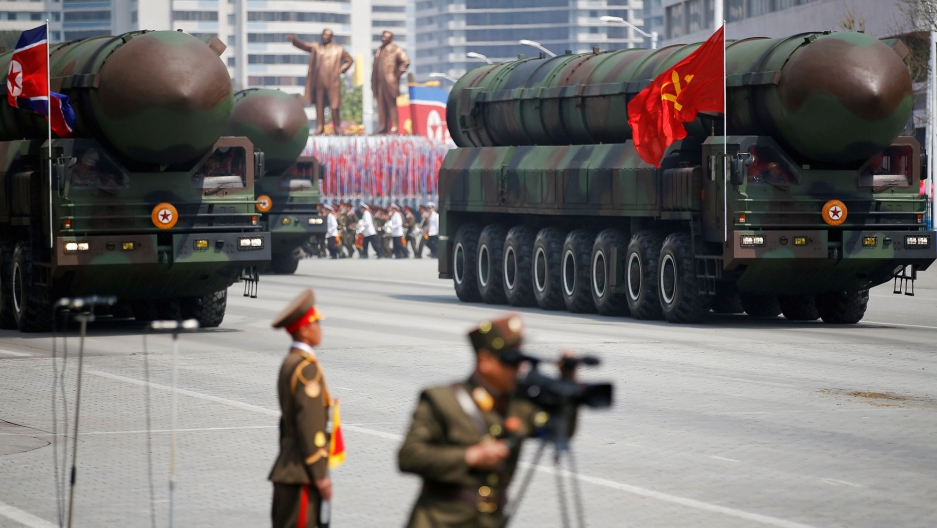 Intercontinental ballistic missiles are driven past the stand with North Korean leader Kim Jong-un and other high-ranking officials during a military parade in Pyongyang, 2017.

South Korea's Yonhap News Agency and two US think tanks reported on Tuesday that work was underway at the Sohae Satellite Launching Station at Tongchang-ri, even as US President Donald Trump met with North Korean leader Kim Jong-un at a second summit in Hanoi, Vietnam.

The rocket test site is the same location North Korea began to dismantle after pledging to do so in a first summit with Trump last year. National Security Advisor John Bolton on Tuesday warned that new sanctions could be introduced if Pyongyang did not scrap its nuclear weapons program.

The summit in Hanoi between Trump and Kim broke down over differences on how far North Korea was willing to limit its nuclear program and the degree of US willingness to ease sanctions.

Bolton told Fox Business Network on Tuesday that following the Hanoi summit, Washington would see whether Pyongyang was committed to giving up its "nuclear weapons program and everything associated with it."

"If they're not willing to do it, then I think President Trump has been very clear ... they're not going to get relief from the crushing economic sanctions that have been imposed on them and we'll look at ramping those sanctions up in fact," said Bolton, a hardliner who has advocated a tough approach to North Korea in the past.

Separately, two US senators sought to dial up pressure on North Korea by reintroducing a bill on Tuesday to impose sanctions on any bank that does business with its government.

US Secretary of State Mike Pompeo said on Monday he was hopeful the United States would send a delegation to North Korea in the coming weeks, but Bolton's remarks and the apparent developments at the Sohae test site may cause new challenges for diplomats hoping to restart negotiations after the failed summit. 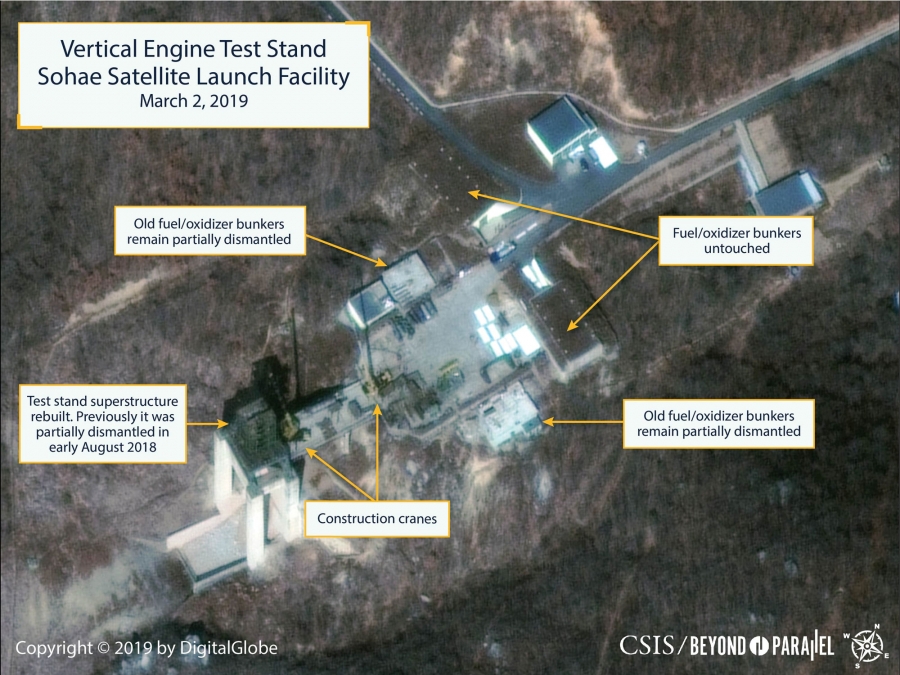 The Sohae Satellite Launching Station features what researchers of Beyond Parallel, a CSIS project, describe as the vertical engine stand partially rebuilt with two construction cranes, several vehicles and supplies laying on the ground in a commercial satellite image taken over Tongchang-ri, North Korea on March 2, 2019.

Satellite images seen by 38 North, a Washington-based North Korea project, showed that structures on the Sohae launch pad had been rebuilt sometime between Feb. 16 and March 2, Jenny Town, managing editor at the project and an analyst at the Stimson Center think tank, told Reuters.

The Center for Strategic and International Studies released a report, also citing satellite imagery, that concluded North Korea is "pursuing a rapid rebuilding" at the site.

"Activity is evident at the vertical engine test stand and the launch pad's rail-mounted rocket transfer structure," the CSIS report said. "Significantly, the environmental shelters on the umbilical tower, which are normally closed, have been opened to show the launch pad." 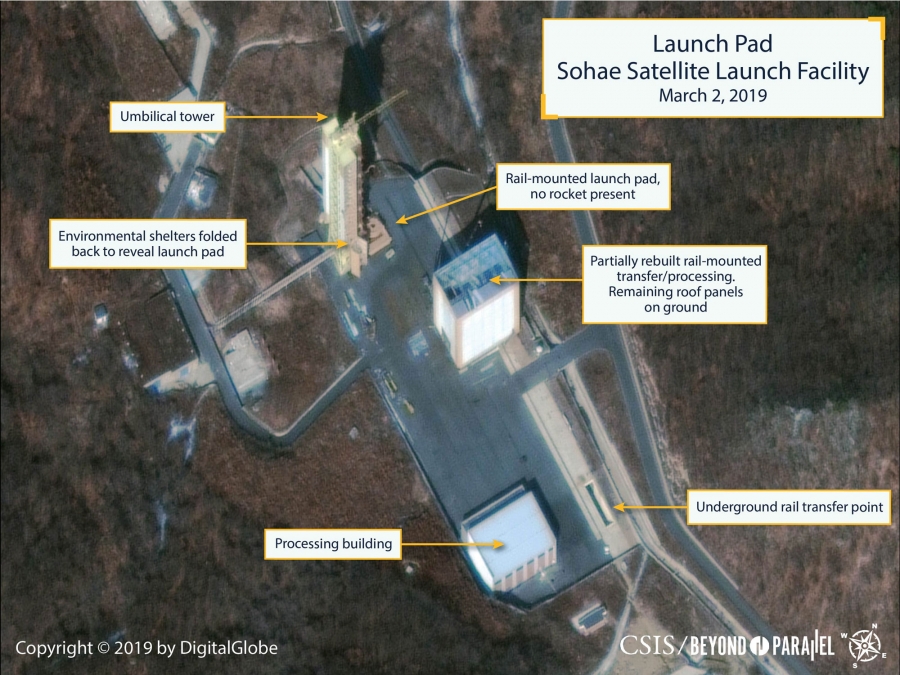 Asked to comment, the White House referred to the US State Department, which did not immediately respond.

A US government source said the South Korean intelligence agency cited by Yonhap was considered reliable on such issues, but added that the work described did not seem particularly alarming, and certainly not on a scale of resuming missile tests that have been suspended since 2017.

Analysts cautioned that the site has never been used to launch an intercontinental ballistic missile and there is no evidence to suggest a test is imminent, but the site has been used to test missile engines and past satellite launches have helped scuttle talks with the United States.

Kim Jong-un pledged at a summit with South Korean President Moon Jae-in in September to close Sohae and allow international experts to observe the dismantling of the missile engine-testing site and a launch pad.

Signs that North Korea had begun acting on its pledge to Trump were detected in July, when a Washington think tank said satellite images indicated work had begun at Sohae to dismantle a building used to assemble space-launch vehicles and a nearby rocket engine test stand used to develop liquid-fuel engines for ballistic missiles and space-launch vehicles.

However, subsequent images indicated North Korea had halted work to dismantle the missile engine test site in the first part of August.

The fact that the site had been dormant since August indicates the new activity is "deliberate and purposeful," the CSIS report said.

Analysts at the James Martin Center for Nonproliferation Studies told Reuters that based on the imagery, the new construction began in the run up to the second summit, which was held on February 27 and 28.

"Bottom line — this is movement in the wrong direction," said Joshua Pollack, a senior research associate at the center.

The breakdown of the summit in Hanoi last week has raised questions about the future of US-North Korea dialogue.

While North Korea's official media said last week Kim and Trump had decided at the summit to continue talks, its Vice Foreign Minister Choe Son Hui told reporters Kim "might lose his willingness to pursue a deal" and questioned the need to continue.

US State Department spokesman Robert Palladino told a news briefing that the United States remains "in regular contact" with North Korea, but he declined to say whether they had been in contact since the summit.

Yonhap also quoted lawmakers briefed by intelligence officials as saying that the five-megawatt reactor at North Korea's main nuclear site at Yongbyon, which produces weapons-grade plutonium used to build bombs, had not been operational since late last year, concurring with a report from the UN atomic watchdog.

Yonhap quoted the sources as saying there had been no sign of reprocessing of plutonium from the reactor and that tunnels at North Korea's main nuclear test site in Punggye-ri had remained shut down and unattended since their widely publicized destruction in May, which Pyongyang said was proof of its commitment to ending nuclear testing.

The fate of the Yongbyon nuclear complex and its possible dismantling was a central issue in the Hanoi summit.

By David Brunnstrom and Lisa Lambert/Reuters