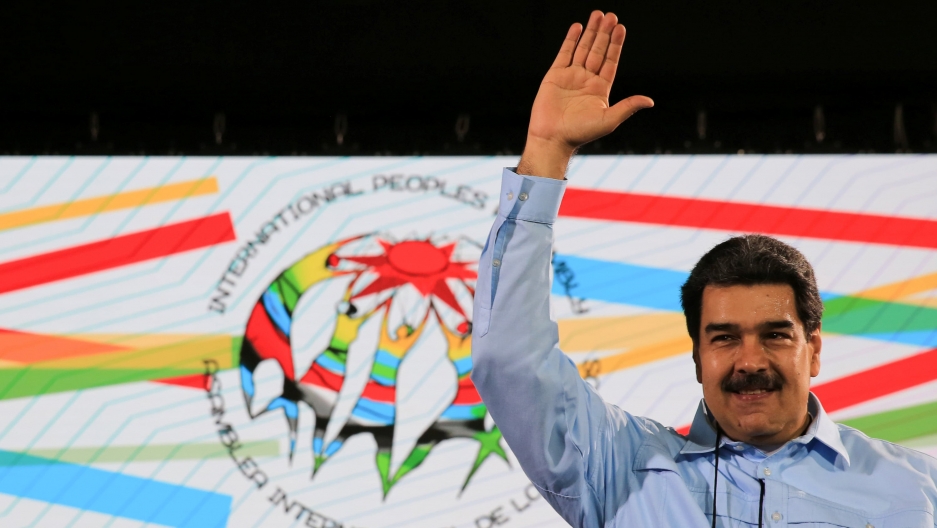 Venezuela's President Nicolás Maduro attends a meeting with international representatives in support of his government in Caracas, Venezuela, Feb. 26, 2019.

Temir Porras has seen a different side of Venezuelan strongman President Nicolás Maduro. Porras was chief of staff for Maduro when Maduro served as the country’s foreign minister. Porras is now a visiting professor at Sciences Politiques in Paris.

Porras says that inside Venezuela, Maduro was not considered an idealogue or a radical socialist.

"He was considered somebody who's used to be good at negotiating and bargaining. Back then Maduro was a very skilled politician," Porras said. "He was a trade unionist. No international experience as a diplomat, and he was considered to be a very pragmatic politician more at the center of the ruling Socialist Party."

The World's Carol Hills spoke with Porras about his experience working with Maduro as his chief of staff.

Carol Hills: Give us an example of how he approached things pragmatically back then.

Temir Porras: Having Hugo Chávez as president as his [Maduro's] boss, and having me as chief of staff, [Maduro] was a more traditional diplomat. Nicolás Maduro played a role as a political operator back then. For instance, one of the strategies of Venezuela was to foster Latin American integration and promote Latin American and Caribbean cooperation. He was extremely effective at getting in touch with heads of state and getting the agreements necessary for those goals to be attained, signed and achieved in a very rapid period of time.

Back then even though there were many leftist governments in Latin America, there were also some conservative governments. For instance, Mr. Piñera, the president of Chile, we had an excellent relation with his government and we achieved, together, for instance, the creation of the Latin American community of states. The Mexicans were also a right-wing government that played a very effective role. And it was also a very different Latin America. There was also a different atmosphere in the region — a more cooperative one. There were, again, leftist and conservative governments that were willing to reach deals and agreements and try to build a common agenda.

That has changed ever since Maduro has changed, but the political conditions in Latin America also have changed. And nowadays I see a more aggressive, if you will, atmosphere, in the in the region.

What is Nicolás Maduro's background? Who is he? Where does he come from?

He came from a, what I would describe as a lower-middle-class background. He didn't go to college. Very early after high school, he became the leader of the trade union of the subway of the metro of Caracas — which is again, a very large organization. And it was his platform to become a politician.

"It's a political war of the United States empire, of the interests of the extreme-right that today is governing, the Ku Klux Klan that rules the White House, to take out of Venezuela. And they have created political communications and diplomatic strategy. They are warmongering, in order to take out Venezuela."

You worked with Nicolás Maduro in the early days of Chavismo. How do you believe that he's changed?

In my opinion, the Nicolás Maduro that became the president revealed that he does not have a clear vision for the country. He is very much focused on consolidating his power among his own peers in Chavismo and much less on exercising or implementing a strategic vision for the country. And this is the reason, probably, why his first term delivered practically nothing in terms of public policy, in terms of direction. It was again a period where, in my opinion, he revealed sort of an obsession with consolidating his leadership and his power.

Nicolás Maduro spoke to our BBC colleague Orla Guerin a few weeks ago and here's what he said:

"Listen, Orla, please. It's a war. I pray that God enlightens you. It's a political war of the United States empire, of the interests of the extreme right, that today is governing, the Ku Klux Klan that rules the White House, to take out of Venezuela. And they have created political communications and diplomatic strategy. They are warmongering, in order to take out Venezuela."

Is Nicolás Maduro a sort of true believer in the sort of Fidel Castro mold or does he have the flexibility of someone who can cut a deal with competing powers?

"In my opinion, the Nicolás Maduro that became the president revealed that he does not have a clear vision for the country."

Of course, he has the flexibility of cutting a deal and I don't think you need to be a believer in Fidel Castro's vision to criticize the approach of the Trump administration to Venezuela. Again, an administration that has implemented its Venezuela policy through John Bolton — one of the authors of the Iraq War; Elliott Abrams, a war criminal in Central America; and a lot of spokesmen-and-women that through the media have been threatening Venezuela with military intervention. Again, I think it's not about sharing Fidel Castro's or other leaders' vision. It's a very concrete way of addressing the Venezuelan crisis.

I guess what I'm trying to get is, is he going to hang in, to the very end? Venezuelans are voting with their feet, you know, millions are leaving. It's a crisis. And there's a whole range of reasons why — and yes, there is the US government and other governments, completely against Maduro. But do you see him as somebody who's just going to hang in to the bitter end or is he going to leave or cut a deal?

Nicolás Maduro and the opposition will be more likely to cut a deal and sit around the table, if and only if, the US administration backs off. The more that you as an administration will push for a regime change, probably the more Maduro and his entourage will resist, and the less likely a negotiation will be.

Can you leave us with one final insight or observation about Nicolás Maduro that would help us understand him?

"Nicolás Maduro and the opposition will be more likely to cut a deal and sit around the table, if and only if, the US administration backs off."

At the beginning, I remember him saying that being the successor of Hugo Chávez, his mentor and his tutor, was a burden in the sense that he didn't want to be the one to spoil [...] the political capital built by Chávez. You know, being the successor, he had to secure that Chavismo would remain a relevant political force and a governing force in Venezuela. And that was a heavy burden. He didn't have, in my opinion, a clear view of what his program and his legacy would be five years later. And we have seen it in the last five to six years.

The current state of the Venezuelan society translates that lack of vision.