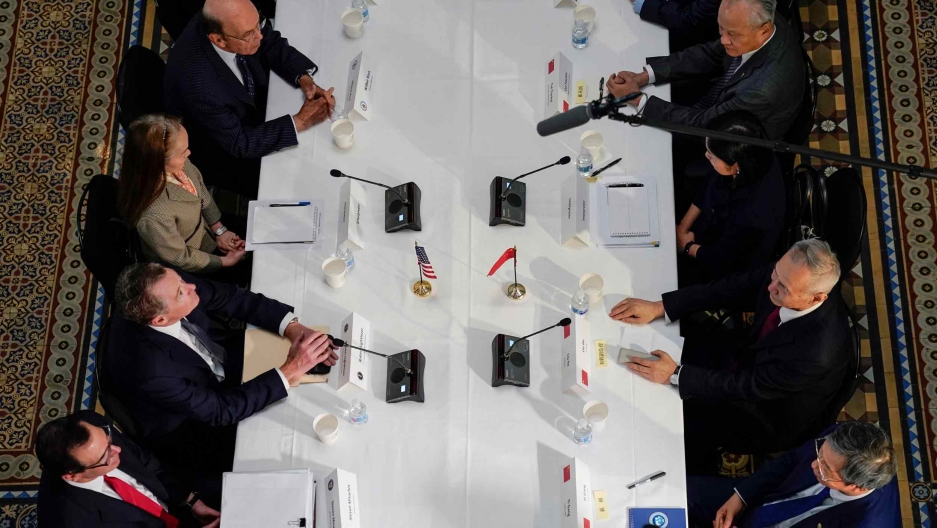 The US and China delegations sit opposite each other for trade talks at the White House in Washington,  DC, on Feb. 21, 2019.

Since he started campaigning for office, President Donald Trump has talked about few countries more than he’s talked about China. Mostly, he’s accused the country of hurting US manufacturing and stealing technology and intellectual property. Over the past several months, both countries have been at loggerheads as they have tried to sketch out more amicable trade deals (though a better deal than hoped has recently been hinted at). And the latest Huawei scandal has exacerbated tensions between the two countries.

Ian Bremmer, president of Eurasia Group and GZERO Media, sees China one of the top risks for the US in 2019.

“The thing that should be worrying the United States strategically, is not that the Chinese is ripping off American intellectual property, which they do, but rather that they’re taking American strategy,” he says.

Drawing parallels with the Marshall Plan, Bremmer believes China’s grandiose infrastructure investments in various developing countries around the world is part of a strategy to align these countries’ political interests with China’s agenda.

George Yip agrees that China is becoming a key player in the global sphere. Yip, a professor of marketing and strategy at Imperial College Business School in London and co-author of “Pioneers, Hidden Champions, Changemakers, and Underdogs: Lessons from China's Innovators,” explains that the Chinese government has been actively encouraging Chinese students, educated in the West, to invest their knowledge back in their home country. He thinks the trend has led to a boom in small Chinese technology companies that have been at the helm of China’s progress.

While the “American Dream” has seemed ever more out of reach to many Americans, many Chinese believe that a better quality of life is increasingly possible in their homeland.

The “Chinese have watched their country go from zero to hero in the last 40 years,” Bremmer explains. “The China Dream [now] seems very real for many people.”

Various governmental policies and incentives have also helped to turn those dreams into reality.

Meanwhile, Trump’s “America First” rhetoric seems to be discouraging foreign students from coming to the US. According to a report by the National Science Foundation, the percentage of science and engineering graduate students from overseas fell by 6 percent from 2016 to 2017. Bremmer believes some foreign students simply do not feel as welcome here anymore.

While the Chinese government has been instrumental in pushing technological innovations, Bremmer warns of two major downsides, which may slow the country’s growth: a lack of a civic culture in Chinese society and President Xi Jinping’s increasingly authoritarian hold on power.

Yip is less fazed by these roadblocks. He argues that China’s civic culture was incredibly stressed by the Cultural Revolution, but is being reinstated with the government’s push towards Confucianism. As for Xi, Yip believes the Communist Party will reign him in if he crosses any boundaries.

And Yip emphasizes that, though Westerners have long thought that the Chinese are conformist, innovation is the order of the day for many of the country’s entrepreneurs. But with a Chinese twist: “The saying is that, while the West is good at going from zero to one, China is very good at going from one to 100.”