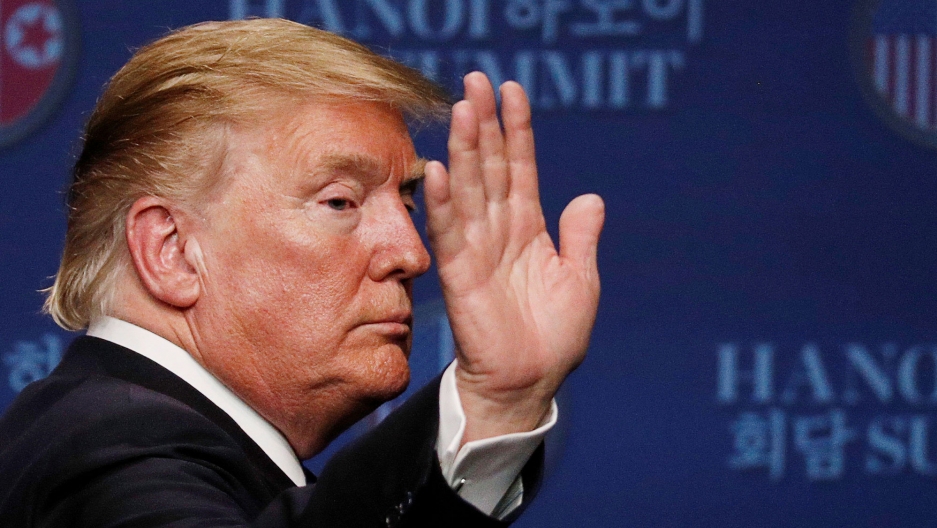 US President Donald Trump reacts during a news conference after his summit with North Korean leader Kim Jong-un, in Hanoi, Vietnam, Feb. 28, 2019.

Even after his second summit with North Korean leader Kim Jong-un came to an abrupt end with no deal on denuclearization, President Donald Trump still struck an optimistic tone.

“I think we’ve had very, very productive discussions. The relationship is as good as it’s ever been,” Trump said during a news conference before leaving Hanoi.

And, as he had been in the weeks leading up to the summit, the American president was especially upbeat about the future possibilities for the North’s economy.

“I want to take off the sanctions so badly, because I want that country to grow. That country has got such potential,” Trump said. “Economically, it’s going to be something very, very special.”

But some in Washington say the best way forward now is to toughen sanctions on North Korea.

“The only way we’re going to get a good deal is to ratchet up the sanctions. We are not doing all we should,” Rep. Brad Sherman (D-CA) told the BBC.

“You’ve got to sanction the large Chinese banks that do business with North Korea,” Sherman said. “If you don’t put on more pressure, there’s no reason to expect Kim is going to offer a better deal.”

Ahead of Trump’s first summit with Kim last summer, the US administration was talking about applying “maximum pressure” on North Korea. The Treasury Department put together a new package of economic sanctions. But they were never implemented by the White House, in the hopes of making progress on denuclearization.

“In June of last year, right before the Singapore summit, Trump said he doesn’t even want to use the term ‘maximum pressure’ anymore, because we’re talking so nicely to North Korea,” said Bruce Klingner, a former CIA analyst on northeast Asia who is now at The Heritage Foundation.

Klingner says it is time for the US to start enforcing those laws and go after known North Korean violators. The Trump administration would not have to wait for Congress to come up with new legislation for sanctions because the North is breaking existing US law, he says.

The US has imposed heavy penalties on Iran, for example, for money laundering.

“We’ve imposed zero dollars on any Chinese bank for money laundering for North Korea,” he said. “There’s more that could be done.”

There are risks, of course.

Punishing Chinese banks could invite retaliation from Beijing. Tougher sanctions on the North could also lead to more North Korean missile tests, or another nuclear test. It might also prompt a quick return to the kind of tension between Trump and Kim that saw the two leaders tweeting personal threats at one another back in 2017.

But if Trump wants a nuclear deal with Kim that gets him to relinquish his nuclear weapons, he needs to use all the leverage at his disposal, says Jonathan Schanzer of the Foundation for the Defense of Democracies.

“The more pressure and pain that you can impose on the other side, the better you’re going to be walking into a deal, letting the other side know that all of this can go away if they play ball.”

“The more pressure and pain that you can impose on the other side, the better you’re going to be walking into a deal, letting the other side know that all of this can go away if they play ball,” said Schanzer, who worked as a terrorism finance analyst at the US Treasury Department.

Trump’s talk about a bright economic future for North Korea stands in stark contrast to the current reality in the country. Nearly half of the population lacks sufficient food. In a ranking of nations by gross domestic product purchasing power, North Korea comes 117th, with an economy roughly one-tenth the size of that of the greater Boston area.

“It’s the result of North Korea’s isolation, its deliberate decisions to isolate itself from the rest of the world,” he said. “The Kim regime is afraid of the outside world, not engaging with the outside world, and as a result, it is isolated, brittle, and economically, has moribund prospects.”

The diplomatic path ahead for the US and North Korea is hard to see at this point. In contrast to Trump’s comments on Thursday, the North Korean foreign minister said that Kim’s regime did not ask for completely removing sanctions, but “partial” sanctions relief in return for dismantling some nuclear facilities.

North Korea’s vice foreign minister, Choe Son-hui, said that the United States, by walking away from talks with Kim in Hanoi, was missing a “once-in-a-lifetime opportunity.”