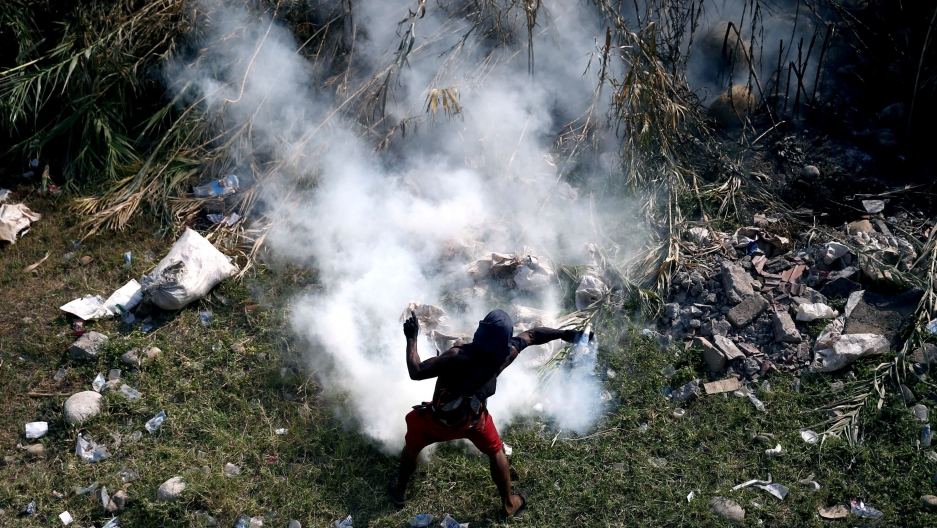 An opposition supporter clashes with Venezuela's security forces at Simón Bolívar bridge on the border line between Colombia and Venezuela as seen from Cúcuta, Colombia, Feb. 25, 2019.

Depending on who you ask, Venezuela has two presidents — Nicolás Maduro and Juan Guaidó. And that's not even the most confusing aspect of the chaos in the Latin American country.

Currently, there's a standoff about whether or not international aid should even enter Venezuela, where about 90 percent of the population lives in poverty.

Over the weekend, three aid trucks briefly made it into Venezuela from Colombia before being reportedly forced back over the Francisco de Paula Santander bridge by the Venezuelan National Guard. The clashes between anti-government protesters and Venezuelan security forces ended with 285 injured, and no aid made it through.

On Tuesday, a top Russian security official accused Washington of deploying forces in Puerto Rico and Colombia in preparation for a military intervention in Venezuela to topple Moscow's ally, President Maduro.

However, when asked if Washington was preparing to take military action in the country, the US special envoy for Venezuela, Elliott Abrams, responded: "No."

He added, "The president has said all options are on the table. Presidents always say that and rightly so. But it still behooves the Russians to talk about military intervention after they have dismembered both Georgia and Ukraine," Abrams told reporters at the United Nations.

Related: Why US-backed aid to Venezuela harkens back to a dark history of covert operations

So, what's next for Venezuela?

Oliver Stuenkel is a professor of international relations at the Vargas Foundation in Brazil who's been closely following the situation in Venezuela. Host Carol Hills speaks with Stuenkel about what's next for the Latin American country, including the possibility of an American military intervention there.

Carol Hills: How likely is US military intervention in Venezuela, and what would that look like?

Oliver Stuenkel: I think what the United States is still hoping for is a political transition. And I think the US has been putting on a lot of pressure, together with countries in the region. Only a very small number of countries in the Western Hemisphere now considers Maduro to be the legitimate president of Venezuela. The problem with that is, the countries other than the United States aren't really economically so important for Venezuela. The key purchaser of oil used to be the United States. Now, it's India — China is an important supporter economically of the regime, and Russia is also quite important. So, unless those three stop supporting the Maduro regime, a political transition still doesn't look that likely. So, there's really not much the United States can do now.

Still, there is a long list of cases where military intervention seemed to be a good option, but in the end the US ended up being stuck in the country for quite a while. And people here, obviously in Latin America, are actively discussing this option. And in the end, the majority of Latin American governments have explicitly said they are against US military intervention.

Have any Latin American countries — either quietly or out loud — said that they would support US intervention in Venezuela?

No, actually not a single government has done so. And even center-right governments, which seek to be closer to the Trump administration, have publicly stated that they do not think that military intervention is the right path.

Well, the best possible outcome is a negotiated transition where you have free elections. I think realistically speaking, the easiest way to make that happen is to offer amnesty to Maduro and the leading generals and basically say, "You are allowed to leave the country. We promise we will not prosecute or punish you in order to make this easier right now." And then the international community would be supportive and allow Guaidó to organize free and fair elections.

The worst possible outcome I think is a civil war. I think it is not entirely impossible to rule out. So, the worst-case scenario — which must also be compared to Syria because Russia does play a significant role as one of the key supporters of the Maduro regime. So, if you have, for example, part of the armed forces remaining loyal to Maduro and the other half pledging allegiance to Juan Guaidó, you could have a conflict between the armed forces. The militias would then basically support whomever pays them better. And you could have the United States along with most of Latin America being supportive of the new government. Whereas Russia — the same way as it does in Syria — continues to support the old government. And in this particular case, you could have sort of a proxy war with both sides being financed and supported by outside powers.

There's a humanitarian disaster in Venezuela because there's not enough food. And so then, there is pressure for outside powers to do something. Isn't that another possible scenario?

Absolutely. I think this is the big moral dilemma when we talk about imposing economic sanctions, right? Because economic sanctions are meant to put pressure on the government. But who pays the price ends up being the population. We see this right now. There's a shortage of food. Whenever I traveled to Venezuela, people tell me beforehand, "I need this kind of medicine or this kind of medicine." There's just nothing available. At the border, border guards try to take food away from you. So, this kind of situation you already have, lots of people leaving the country. There's a dilemma here: To what extent do you want to put economic pressure on the government, but how do you assure survival of a country and there's still 30 million people in the country.