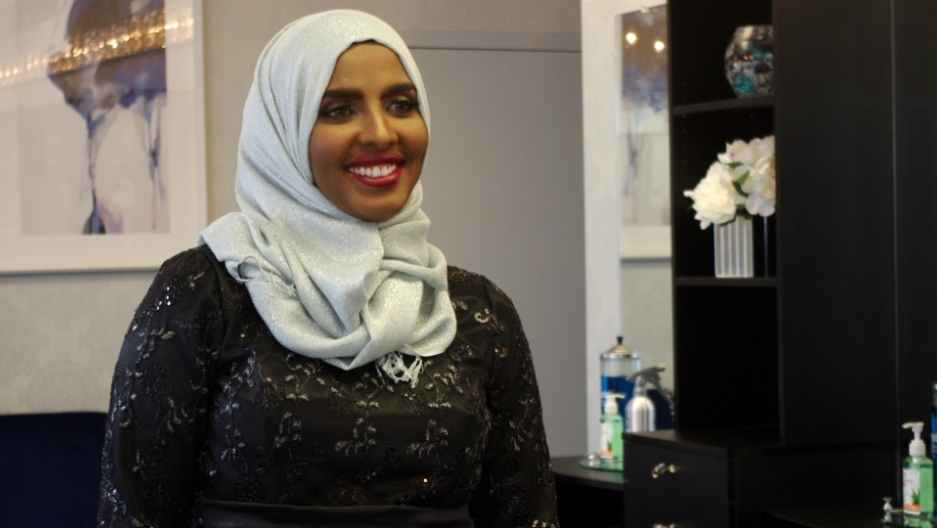 For most people, going to a beauty salon and getting a haircut is routine. But for Muslim women in Massachusetts who cover their hair for religious reasons, it can be a real challenge. At a traditional hair salon, they risk men seeing them without their headscarves on.

But that is now changing. Massachusetts’ first salon and spa established specifically for Muslim women opened on Monday.

Shamso Ahmed is the woman behind the new business. She says she’s been dreaming about this since she was a young girl.

At the age of 10, Shamso Ahmed fled the civil war in Somalia and arrived in Boston with her family. Two years later, she started wearing a hijab, a Muslim head covering, and that’s when she came up with the idea of opening a salon.

“I envisioned this huge, big salon that had all the services you could think of,” remembered Ahmed. She wanted a place where “women felt safe.”

Now, some two decades later, Ahmed has a degree in accounting and training in cosmetology. And she has a salon. While it’s not huge, the storefront is decked out.

“I am in love with chandeliers,” said Ahmed as she walked through the space on its first day open to the public.

In a neighborhood peppered with beauty shops, what makes Shamso Hair Studio and Spa unique is not the silver and black décor — or even the henna body art or the hammam steam spa — it is who is allowed in and who is not.

Ahmed says the space is carefully designed to be female-only. At the door there’s a camera and a code required. The windows are frosted so people walking past can’t see in.

For Muslim women who wear hijabs, Ahmed says it’s long been hard to find a place to get your hair done.

“That has been the biggest challenge,” Ahmed said. She said some women go to a salon and befriend a stylist, asking them to come to their home. Others ask to go to a salon after it’s closed for the day or they get their hair done in a backroom. Still others rely on female relatives.

When Ahmed isn’t working on her other business, a translation service, she has often worked as a stylist going from house to house. Now, Ahmed is hoping her clients and others will come to her salon — any time of day, no backroom necessary.

Ahmed said there’s been a lot of enthusiasm in the Muslim community, and people came from other states just to attend the opening. “Maine, Rhode Island, New York, New Hampshire,” she ticked off the places. “Some of them came from Ohio, Virginia, Maryland, DC”

And some, like Koldia Shah, have come from just down the street. She is checking out the new space on behalf of her daughters, ages 7 and 9. She said when they start covering their hair, this will be really nice.

Shah said she likes that her daughters will “not feel like they have to scavenge around all over Boston to just do something nice for themselves.”

Right now, Shah cuts her own hair, and said she’s not sure how she would feel about taking her hijab off outside the house.

“What if a woman doesn’t even want to sit with other women?” Shah asked Ahmed.

Ahmed said she hadn’t thought of that, but assured Shah that they “would arrange something.”

Shah admitted she's a bit old-school. She said it would not only be an adjustment to take her hijab off, but it would also be strange to pay for something she’s long taken care of at home.

“Couldn’t wait,” said Farhia Ali, who is part of the Somali Muslim community. “A place to go my day off to just relax and do something. It’s really hard to find [a place] for us as Muslim women in Boston where we can just go and get pampered and get our nails done and someone actually understands what we want. This will be the place.”

Ahmed can't say exactly how many women her salon might serve, but she said several hundred people came out to attend her launch party.

For Ahmed, this isn’t just a childhood dream she’s fulfilling. She said she’s also living out her mother’s dream, who owned a small business in Somalia before war broke out. And, she said, she’s following her religious role model.

“The prophet Muhammad — peace be upon him — his wife, Khadijah, was a very powerful businesswoman, and she encouraged others to follow her footsteps,” Ahmed said.