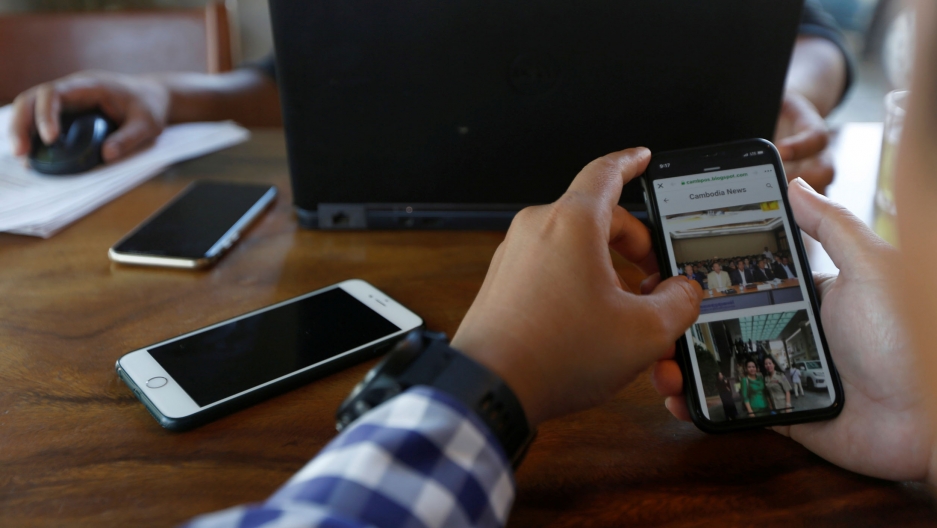 Quick, don’t look away. You might be finding it difficult to stay focused — someone just liked your Instagram photo, your Facebook messenger group chat is blowing up, and oops, oh no, looks like you missed a call from mom.

The abundance of apps and services on your digital devices might seem like they control you, your attention and your time, more than you’d like to admit. At least, that’s what Cal Newport, author of “Digital Minimalism: Choosing a Focused Life in a Noisy World,” claims. Newport, a computer science professor at Georgetown University, says you can adjust your life online. He thinks we can reclaim our offline life — and attention — by using tech more thoughtfully.

“Digital minimalism ... says you should essentially wipe the slate clean, get rid of all those apps and services that you haphazardly downloaded or signed up for and then rebuild that digital life from scratch, but do it with real intention this time,” Newport says.

He explains that people who take 30 days to adopt this minimalist lifestyle lose the impulse to look at their phones. They are then able to think more deeply about how to best use their time.

No one wants to be called a birdbrain, but research shows that our brains react in a similar way to pigeons’ brains, when it comes to rewards. Pigeons find intermittent rewards irresistible, and so do we. The human equivalent of food pellets comes in the form of social media, specifically the notifications that pop up on your phone, indicating that someone is thinking about you. Newport calls these social approval indicators “almost impossible to resist.” Digital social media platforms are able to use this knowledge about our biology to get us hooked.

“We’re a social species. Part of what’s allowed us to thrive so much is that we’re very, very good at monitoring people around us [and] monitoring people’s opinions of us. ... The problem is that gives lots of vulnerabilities for tech to exploit,” Newport says.

Newport explains how social media platforms designed tools and functions, such as the “like” button and retweeting, to “fundamentally re-engineer the social media experience.” Phones became more interactive, which caused us to be more focused on the number of “likes” we got on a post, rather than the quality of the post itself. “This plays with our psychological hardware in a way that made it very difficult not to keep tapping the app. And this is how social media is able to up their revenue,” Newport says.

We can see the serious consequences that tech causes, by studying children's interactions with the digital world. Newport explains how studies attribute rises in anxiety, self-harm, and suicide among adolescents to their time spent online. “We’re on the precipice of looking at this as a public health crisis,” Newport says.

Going offline can be complicated, since people enjoy what the digital world offers. “People aren’t complaining about the app or the digital service, but rather the amount of time they end up using on it,” Newport says. Removing your entire digital presence may not be practical. Newport instead suggests finding your own online autonomy, and deciding how to use tech most efficiently to best suit your needs.

Reclaiming that autonomy can also help your attention span. Newport explains that long-form thinking is “something we have to train and cultivate.” Getting rid of digital distractions, and returning to activities like long-form reading, can whip your attention back into shape, he says.

Facebook and Twitter have been losing users in the United States, and Newport notes that public opinion around how we interact with technology is changing. He believes that society may be ready to examine, critique, and reevaluate the way that we let tech influence our lives.