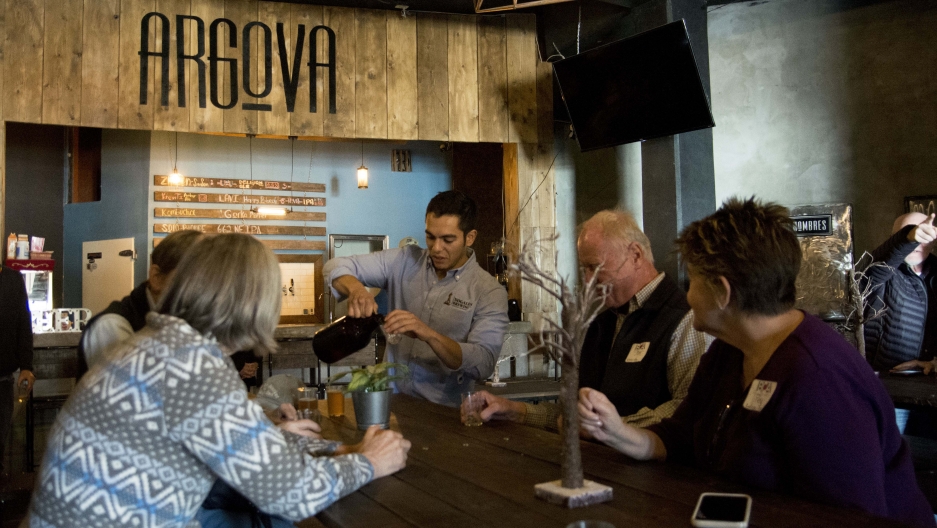 Andres Vega pours beer for American visitors on a gastronomic tour of Nogales with the Arizona nonprofit, Border Community Alliance.

The border town of Nogales is sometimes referred to as ambos Nogales, or both Nogales. That’s because part of the community is in Arizona, and part is in Sonora, Mexico. The twin towns are divided by a metal wall nearly two stories high, and a few months ago, US military troops deployed to the border added several rows of razor wire to the barrier.

It doesn’t look like a tourist attraction. But this is where most tours with the Border Community Alliance begin. The tour groups meet up on the US side, then it’s just a short walk through a metal detector, then a gate, and into Mexico. No one checks your ID, no one asks questions.

Related: Radio waves connect Mexicans in remote Tlaxiaco with family in the US

“We want to show that there's so much more going on and very positive,” said Alex La Pierre, program director for Border Community Alliance. The goal of the cross-border tours, he said, is “citizen-level diplomacy, bringing people to Mexico to make up their own minds.” 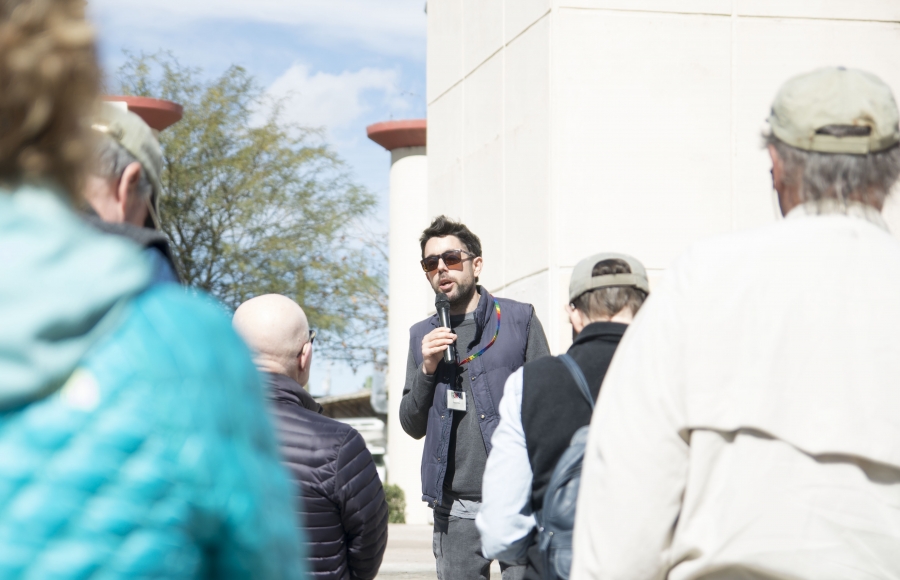 Alex La Pierre stops on a sidewalk in Nogales, Mexico to tell American tourists about some of the area's history.

La Pierre guides these tours, taking hundreds of Americans each year to see what’s really on the other side of the border. The Arizona-based nonprofit offers multiple travel itineraries, including overnight tours and day trips, all of them meant to counteract fears about the border region. Some tours highlight local businesses or area history, but this tour was all about Sonoran cuisine.

“The act of sitting at a table and breaking bread with someone is almost ritualistic in promoting good relations. And what's not to like about food?” La Pierre said.

A group of 15 Americans were on this Gastronomic Nogales day trip. One of the highlights was a meal at La Llorona, a cozy restaurant with star-shaped lanterns twinkling from the ceiling, a hand-drawn chalkboard menu and, most importantly, really tasty food.

“I had birria, which is a soup that’s complex with chiles and delicious beef. I could eat this probably every day,” said Quince Affolter, a visitor from Portland, Oregon.

The upscale menu at La Llorona is not the cheese-covered fare standard at many Mexican restaurants in the US. This meal, and all of the stops on this tour, were focused on challenging stereotypes about Mexico.

As it happens, these Americans walked over the border for this tour the day after US President Donald Trump declared a national emergency in order to build a border wall.

Related: The US is currently in 31 other national emergencies. Here's what that means.

Affolter said it doesn’t feel to her like there’s an emergency: “Certainly my experience in being here, everything is easy and very normal. It’s fun to see the streets so alive.”

This border community isn’t totally free of crime, though. Last month, US Customs and Border Protection made their largest seizure ever of the drug fentanyl in Nogales. Trump tweeted his thanks to the border agents who made the drug bust, while critics pointed out that the bust happened at a legal point of entry, and a border wall couldn’t have stopped that.

But La Pierre said, when debates over drugs and violence dominate the news about the border, Americans only hear a tiny part of a much bigger story.

“We really see this work as being on the front trenches of changing minds about the border region,” he said.

Most people who come on Border Community Alliance tours are Arizona “snowbirds,” retirees from colder parts of the country, who spend winter months in the Southwest. La Pierre said that puts his organization in a unique position to be able to spread good news about the borderlands across the US.

“We basically charge them with the homework that you're now a goodwill ambassador for Mexico because you've had a firsthand experience,” he said. “So go back to Minnesota or go back to New Hampshire, wherever you live, half of the year, and please share with your neighbors.” 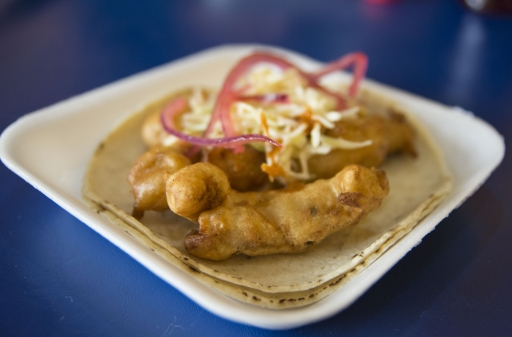 A fried fish taco from El Pescadito in Nogales, Mexico. Proximity to the Sea of Cortez makes seafood a major part of Sonoran cuisine.

Some Nogalenses wish that message would reach more Americans too. Alma Grijalva runs a casual fish taco shop called El Pescadito, the first stop on this gastronomic tour. She said she gets a lot of American diners, especially on the weekends. She’s happy to serve them, she said, but wishes relations between Americans and Mexicans weren’t so politically uncomfortable right now.

“We’re neighbors, we’re almost brothers, we should be fine,” she said in Spanish.

From El Pescadito, the tour group rode in a van through Nogales, all the while hearing the history of the area from La Pierre. The tour passed busy shopping areas, sports arenas and schools — signs of a city whose population has exploded since the 1990s. That’s due, in large part, to manufacturing jobs and an economy built around cross-border trade.

Later in the afternoon, the tour stopped at Cerveceria Argova, a new craft brewery. Andres Vega, the 20-something Nogalense entrepreneur who started the business, said he wants Americans to see that his hometown is a great place to visit.

“We need to change that perspective from the USA that Mexico is so different and difficult, right? But you can come, and get really good food and really good beer,” he said.

The trip across the border wasn’t hassle-free. To get back into the US, the American visitors waited in line, presented their passports and answered a customs agent’s questions before crossing back through that razor-wire-covered gate.

This month, the city council of Nogales, Arizona passed a resolution demanding the federal government remove the razor wire, saying their city isn’t a war zone or a prison.

That’s something that’s become clear to border tourist Peg Wickliffe. After a day of tacos, craft beer and history lessons, she said all of the anxiety surrounding the border feels misplaced to her.

After all, Wickliffe said, it’s pretty hard to feel scared of someone once you’ve sat down for a meal with them.