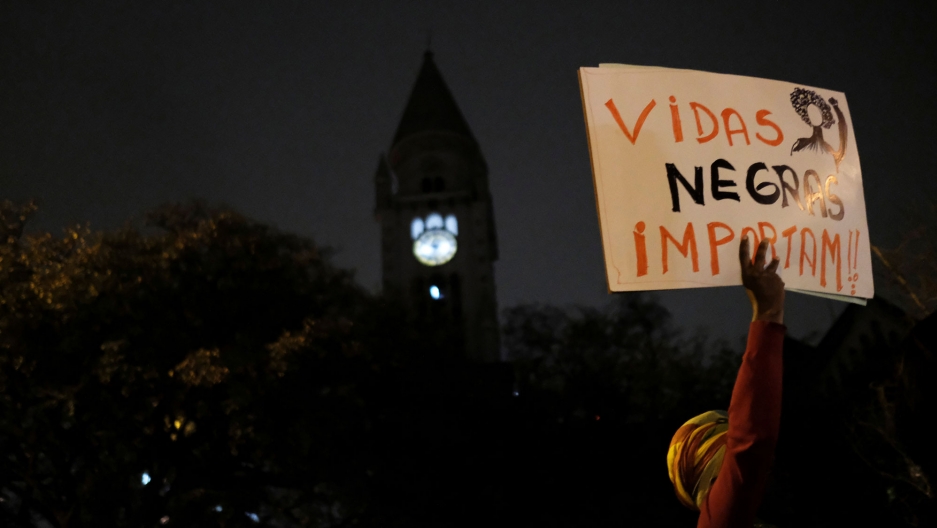 A demonstrator holds a sign reading, "Black Lives Matter," while taking part in a protest against racism and machismo in Sao Paulo in 2018.

“I can’t breathe.” Eric Garner, a black man, said those words in 2014 while kept in a chokehold by a New York City police officer. A cellphone video of the incident went viral and sparked widespread Black Lives Matter protests. Now, a similar series of events are playing out in Brazil.

This time, the cellphone video is of an incident that allegedly killed Pedro Henrique Gonzaga. It shows the events of Feb. 14 inside a supermarket in an upscale neighborhood of Rio de Janeiro. Gonzaga, 19, is on the ground. It looks like a security guard is lying on top of him. People surround them. Someone says Gonzaga can’t breathe. Gonzaga was later taken to a hospital where he died from a heart attack.

“When you see the details of this case, there's just no way you cannot think of Eric Garner,” said Marques Travae, a Detroit native who lives in Brazil and runs a blog called Black Women of Brazil.

He says for days after Gonzaga died, there was conflicting information about what exactly happened. The security guard said Gonzaga — who was at the store with his mother — tried to grab the guard’s gun. People have pointed out that’s not shown on the video.

“It was absolutely unnecessary,” Travae said of the guard’s actions. “If you've seen pictures of Pedro Henrique, he's a small-framed guy. He's a little bit on the frail side.”

According to Human Rights Watch, police in the state of Rio de Janeiro killed more than 8,000 people between 2005 and 2015. Three-fourths of them were black men. Police say most are legitimate cases of officers defending themselves. Activists say that’s an age-old defense officers used across the world.

Brazil’s history, like that of the US, is fraught when it comes to race. Brazil was an important hub of the transatlantic slave trade, receiving millions of enslaved Africans. Slavery was legal until 1888, later than anywhere else in the Americas.

Last year, a Brazilian congressional committee found that a young black person is killed every 23 minutes in Brazil. The committee wrote, “The Brazilian state, directly or indirectly, perpetrates the genocide of the young black population.”

“Brazilian black population are the poorest among the poor,” said Marcelo Paixão, a Brazilian economist who teaches at The University of Texas at Austin.

He says things for black Brazilians improved in the early 2000s because of progressive policies and affirmative action. In 2010, people who self-declared as black or brown made up the majority of the population for the first time, surpassing people who describe themselves as white. Paixão says for a moment, it looked like Brazil was on a path toward equality. But then, he says, there was backlash.

The economy soured, progressive policies ended and Paixão says economic mobility slowed for black people. In 2015, police fatally shot five young black men out celebrating after one of them got his first paycheck. Last year a black city councillor in Rio de Janeiro, Marielle Franco, was killed, and no one’s been charged with her murder.

In October, Brazilians elected as president Jair Bolsonaro, a former army captain who’s known for his racist and homophobic comments. He has also said police officers should have freedom to do their job.

“He was talking overtly about ‘the police should have all liberty to act as they believe,’” Paixão said.

At the same time, Paixão says, the danger has increased for anyone who takes a lead in opposing the government. Last month, Brazil’s first and only openly gay congressman announced he was leaving his job — and the country — after receiving death threats.

“Because he said, ‘I cannot bear it anymore,’” Paixão said. “It is very dangerous nowadays to be a leader. Please believe the situation over there nowadays is very bad.”

In the hours after Gonzaga’s death, no one leader emerged against police brutality. Instead there were many voices calling on Brazilians to demonstrate. The messages spread, using the phrase Vidas Negras Importam, “Black Lives Matter,” in Portuguese.

And so just three days after Gonzaga died, thousands of protesters demonstrated across the country.

“This murder galvanized people,” Travae said. “People are reaching the boiling point. It's not quite there, but it could overflow if something else like this happens because people are really right at the end of their rope.”

More people are finally willing to organize and fight, Travae says, because they know under Bolsonaro it may not take long for things to get worse.