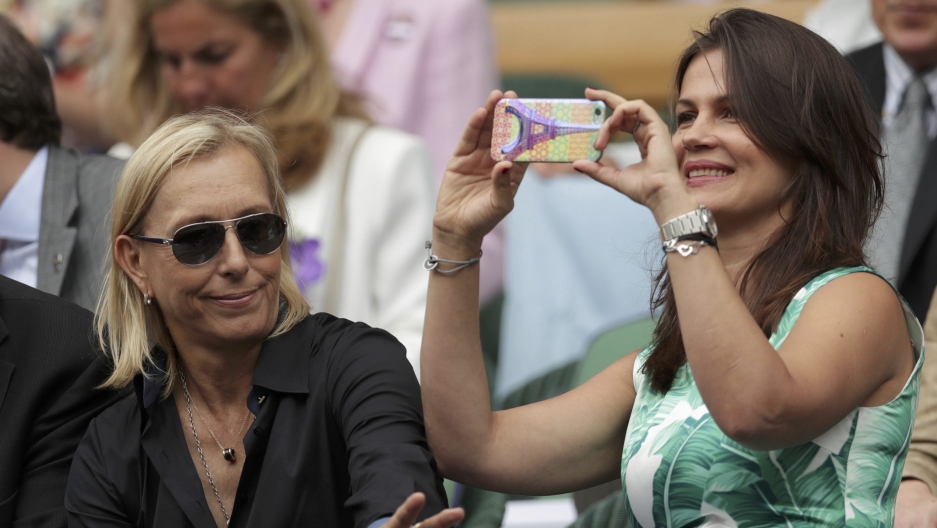 Former Wimbledon champion Martina Navratilova, with her wife, Julia, are pictured in the royal box on center court during the women's singles final on Spet. 7, 2016.

Tennis legend Martina Navratilova first shared her opinion on transgender athletes on Twitter and followed that up with an editorial in The Sunday Times, a British newspaper. She wrote that a man can decide to be female, take hormones, win everything and earn a small fortune, then reverse his decision and go back to making babies if he so desires.

She went on to say that it’s insane and it’s cheating.

Since then, the LGBTQ advocacy organization Athlete Ally has cut ties with Navratilova, calling her transphobic.

And many activists and international athletes say Navratilova’s argument doesn’t hold up, including Dr. Rachel McKinnon. She’s a Canadian world champion cyclist who advocates for the rights of trans athletes like herself.

McKinnon accused Navratilova of having an irrational fear of trans people. On Twitter, Navratilova accuses her of being a bully.

Hey @CNN and @guardian - this transgender athletes competing controversy is not about me and it is not about whether I was criticized or not- you ought to talk about the actual issues I raised instead- your reporting is not fake news, but it surely misses the point!

“She has portrayed it as me attacking and bullying her, which is not the case,” said McKinnon. “Look, you can go look at every tweet I sent, and it was explaining things like genitals don't play sports. Why do you think that matters?”

Navratilova has responded on Twitter by saying the criticism is unfair and that this is a serious issue that warrants discussion.

Sportswriter and tennis player Stephanie Myles agrees — that a larger discussion is needed. On the website, Tennis Life, she wrote that Navratilova’s argument has some merit.

“The fact is, and look I love men's tennis and I love women's tennis, but they're not necessarily the same thing.”

“The fact is, and look I love men's tennis and I love women's tennis, but they're not necessarily the same thing,” explained Myles. “The men, you know, most of them are taller and most of them have more upper body strength. And that's just that's just sort of the way it is, and as a result, they can serve a lot harder.”

The Women’s Tennis Association, the sports global governing body, has rules in place when it comes to trans female athletes. It says that an athlete needs to maintain a level of male testerone in the blood below a certain level — 10 nanomoles of testosterone per liter for at least a year before competition. In 2016, the International Olympic Committee adopted the same guidelines for transgender women athletes, though transgender men can compete without restriction.

Myles says rules are good. But, she says, transgender women still have an advantage because men often have more muscle.

Related: A US transgender activist is stuck in Sweden. The UN wants to investigate.

“Even though your testosterone level might have dropped, now maybe you might not be as powerful as you were previously, but that doesn't mean that you wouldn’t be a lot more powerful than a woman” Myles said.

But McKinnon doesn’t buy it. She says it’s absurd to think that men would temporarily transition just so they could enter and win a sporting competition. She says that’s not how transitioning works.

“So, in the [United States], to legally change your gender or your name requires a court visit, and you have to find a judge that will look at you and hear your case and granted, them these requests get denied by actual trans people who are not faking it.”

She says it takes a long time to find a doctor to administer hormones, and it’s an expensive process.

The International Olympic Committee hasn’t weighed in on Navratilova’s comments. So far, no transgender athlete has competed in an Olympic sport.