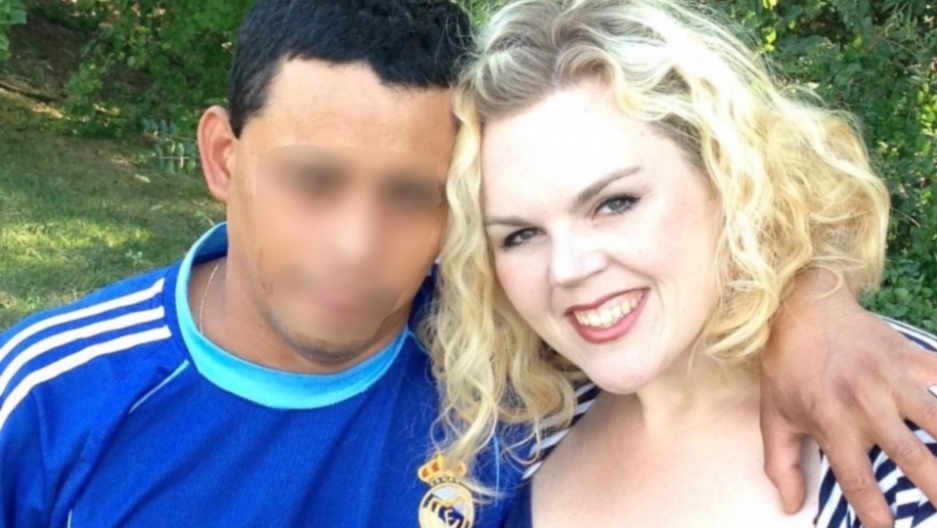 US citizen Nancy Sanchez, right, fears that if she petitions for a green card for her undocumented husband, he’ll be forced to leave the United States and given a mandatory minimum 10-year exile. But with the Trump administration’s crackdowns, undocumented spouses also face a higher risk of getting seized and deported. Untold numbers of mixed-status couples face this dilemma.

Nancy Sanchez has happily sponsored two of her husband’s children in El Salvador, so they could come to live as legal permanent residents with the couple in Herndon, Virginia. Legally, for immigration purposes, she’s considered their mother. A third child is also coming.

But if Sanchez were to sponsor her undocumented husband of six years for legal status, the US immigration system would require that he first be punished—severely. Under a 1996 law, he’d have to endure a minimum 10-year exile from the United States. So even though Sanchez could sponsor the kids, she doesn’t dare come forward to try to also get a green card for her husband.

“Isn’t it crazy? My husband is my best friend. I can’t imagine being without him."

“Isn’t it crazy? My husband is my best friend. I can’t imagine being without him,” the Fairfax County, Virginia, resident said during an interview at the US Capitol on Valentine’s Day.

Sanchez, 42, was in Washington, D.C. to join a lobbying effort by American Families United, a group of US citizens married to undocumented people. Pushing baby strollers down US Capitol halls and herding toddlers, the US citizens spoke to Congressional staff of both parties, urging them to pass amendments to the 1996 law they so fear.

Enough families have already been hurt by the law, with its mandatory “bars,” or exile, that can last 10 years, 20 years, even a lifetime, depending on the spouse’s immigration history, as the Center for Public Integrity has reported in multiple stories. But with Trump insisting there’s a “national emergency” on the southern border—despite record low crossings—these US citizens want to let their fellow Americans know that they’re suffering an emergency every day.

They’re trapped by the law’s mandatory bars, fearing that if a green card is denied, they’ll be forced to choose between living apart from their spouses or moving to spouses’ home countries and struggling to adjust. With the Trump administration’s tougher immigration crackdowns, they’re also frightened that their partners could be suddenly detained in a US Immigration and Customs Enforcement workplace raid—or placed in ICE custody after a chance encounter with local police over a traffic infraction.

Those who’ve started the green-card process worry that ICE knows where they live.

“Any time ICE wants to, they could come and get him."

“Any time ICE wants to, they could come and get him,” said Minneapolis, Minnesota, resident Kali Pliego, 37, bouncing her 2-year-old son Mateo on her knee at the Capitol. She filed her first round of paperwork a decade ago to sponsor her undocumented husband for legal permanent residency. She was hopeful that the 1996 law would eventually be amended.

But she’s been stalling moving forward with the application, dreading what could happen. Pliego’s husband is from Mexico, and he originally arrived in 1997. When his mom became ill, he returned to Mexico and then entered the United States again, which isn’t an unusual pattern for immigrant workers. But it’s a pattern that disqualifies a green-card applicant from waivers some couples can seek from exile—waivers that are difficult to obtain in any case.

When Trump was elected, his harsh rhetoric about immigrants terrified Pliego.

“It sent me to therapy, with all the anxiety, the panic,” the Christian ministry worker said. If her husband gets picked up by ICE for some reason, they’ll fight in immigration court to stay his deportation. But only Congress, she said, can really come up with fix for the dilemma she and others are in.

Pliego and others also lament that it’s hard for them to get their story heard because of all the focus on the border today. Immigrant spouses have been receiving bars since the early 2000s, when the law began to be enforced with more vigor. But most Americans are still shocked when they hear about the mandatory exile.

“People always think that by marrying a US citizen, people become a citizen,” Pliego said.

Her father, Scott Hargesheimer, 66, who accompanied her on the trip from Minnesota to Washington, was surprised to learn that this wasn’t true. Now he’s sticking by his daughter, son-in-law and Mateo, and hopes the lobbying pays off. “Family is first,” he said.

Prior to when US officials began enforcing the bars, it was common for an American to sponsor an undocumented spouse for legal permanent residency. The system allowed for judicial discretion. An immigration judge, for example, could grant residency to a spouse based on his or her ties, and the immigrant spouse would often pay a monetary fine.

In 2013, former El Paso, Texas, Rep. Beto O’Rourke—now a possible Democratic Party presidential hopeful —introduced legislation that would have restored that discretion to the immigration system. The American Families United Act had 11 co-sponsors that year, including three Republicans. During the 2017-2018 legislative session, O’Rourke’s proposal was supported by eight co-sponsors, five of them Republicans. But the measure never moved beyond a committee.

American Families United members are hoping legislators in the current Congress will resurrect the proposal.

Stacy Rodriguez, who grew up in Pennsylvania and now lives in Atlanta, cried as she talked about how her undocumented husband is father and breadwinner for their two children and three children she has from a former marriage. One of her sons, who is an honors student, accompanied her on the trip to the Capitol.

She can’t go with her husband if he’s deported, or if the green-card process she’s started ends with him barred for years, said Rodriguez, 40, tears rolling down her cheeks. She gestured toward her son, who was reading and listening to music with his earphones in. She doesn’t speak Spanish, and neither do the kids, and she can’t imagine interrupting the children’s education to move to Mexico, her husband’s home country.

“We made a decision to involve the children by telling them something about their dad’s situation,” Rodriguez said, “because of the fear that we have of them coming and taking him away in a violent way.” Whenever her husband is late calling her, she said, her heart “flutters, and she feels like she’s going to faint.”

“There’s not one single positive thing that can come from separating me and my five children from my husband,” she said. “They’re talking about a separation that could last a lifetime.”

The Center for Public Integrity is a nonprofit investigative news organization in Washington, DC.