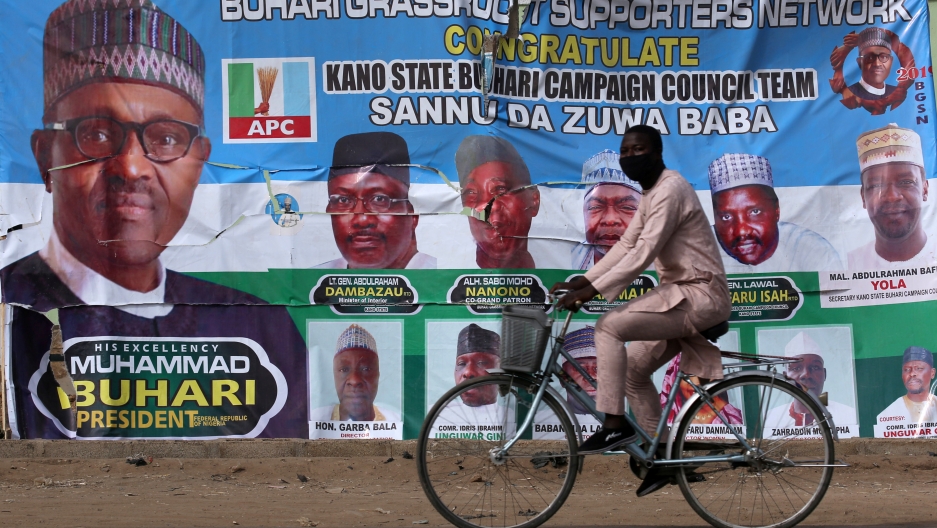 A cyclist drives pasts a campaign poster for President Muhammadu Buhari in a street after the postponement of the presidential election in Kano, Nigeria, Feb. 17, 2019.

Nigerian President Muhammadu Buhari on Monday warned that anyone trying to tamper with Nigeria's postponed vote risked their lives and accused the electoral commission of incompetence.

The Independent National Electoral Commission announced the delay in the early hours of Saturday, just as some of Nigeria's 84 million registered voters were already making their way to polling stations.

While most Nigerians took the delay in a presidential election in their stride on Sunday, after similar postponements in 2011 and 2015, one presidential candidate and civil society groups expressed concern that the vote could now be compromised.

Related: Postponing Nigeria's 2015 elections may help the cause of democracy

Buhari said anyone trying to steal or destroy ballot boxes and voting material in the election now scheduled to take place this coming Saturday would be dealt with firmly.

"I have given the military and the police instructions to be ruthless. We are not going to be blamed for the bad conduct of the election."

"I have given the military and the police instructions to be ruthless. We are not going to be blamed for the bad conduct of the election," he told an emergency meeting of senior members of his All Progressives Congress party in the capital Abuja.

He said anyone trying to intimidate voters or interfere with the voting "will do it at the expense of his own life."

The opposition People's Democratic Party has suggested that Buhari, a former military ruler who was later elected president in 2015, was behind the postponement in order to hold on to power.

The ruling party has accused the PDP of being behind the delay and colluding with figures within the electoral commission.

The PDP criticized the president's comments in which he warned people against tampering with election material.

"President Muhammadu Buhari's threat to the lives of Nigerians, at the opening of APC's national caucus meeting in Abuja today, is a direct call for jungle justice."

"President Muhammadu Buhari's threat to the lives of Nigerians, at the opening of APC's national caucus meeting in Abuja today, is a direct call for jungle justice," the party said in a statement.

All sides have, however, appealed for calm in a country where past elections have been marred by violence and intimidation. So far, there have been no signs of violence or unrest after INEC announced the delay.

Buhari faces a tight contest against the PDP's Atiku Abubakar to lead a country that has Africa's largest economy and is its top oil producer but is plagued by corruption and wide gaps between rich and poor.

The election has been fought over Buhari's handling of the economy amid fragile growth and growing unemployment as the country recovers from a recession in 2016. Rising insecurity, notably in regions under attack by Boko Haram and other Islamist militants, is also a big worry.

The INEC cited logistical difficulties and problems with transporting election material to far-flung or conflict-ridden areas and denied any political pressure had been brought to bear in its decision to suspend the vote.

Buhari said there was a need to scrutinize the issues that caused the postponement.

"Definitely the reasons why such incompetence manifests itself has to be explained to the nation. After the election we have to know exactly what really happened," he said, promising that an investigation would be launched.

The electoral commission had said that campaigning would be suspended until the new voting day on Saturday but the two main parties have said they intend to resume campaigning.

"INEC is not in a position to make laws. The law says you are entitled to renew campaigns up to 24 hours before the beginning of the election," he said.

The opposition PDP also said it would get back on the campaign trail. It rejected the commission's decision on campaigns, which a PDP statement said was "directly in conflict with the provision of the Electoral Act and is not backed by any other law in our country."