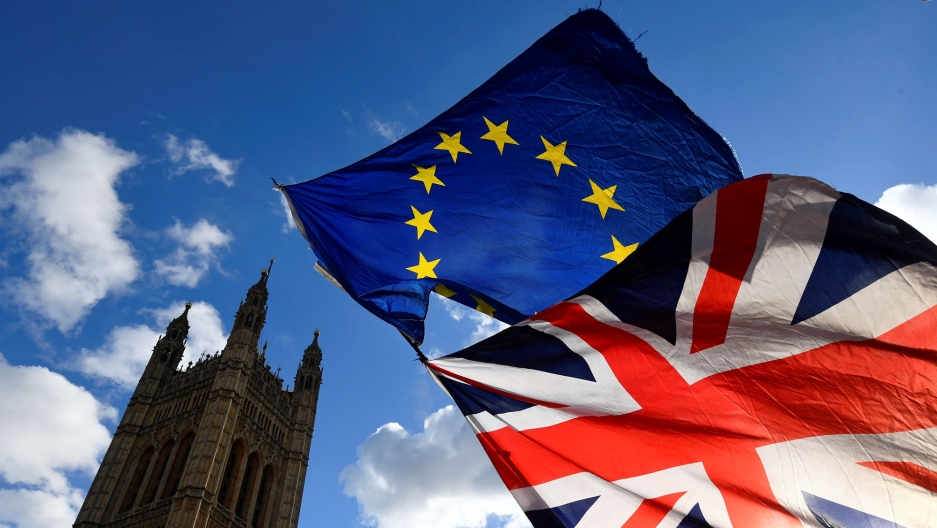 British and EU flags flutter outside the Houses of Parliament in London, Britain.

As the United Kingdom's Brexit crisis deepens, Goldman Sachs and JPMorgan have differing views of the ultimate outcome but agree on one thing: They don't believe there will be a no-deal Brexit.

Unless Prime Minister Theresa May can get a Brexit deal approved by the British parliament, then she will have to decide whether to delay Brexit or thrust the world's fifth largest economy into chaos by leaving without a deal on March 29.

Goldman Sachs said it sees a 50 percent probability of May getting a Brexit divorce deal ratified, adding that lawmakers would ultimately block a no-deal exit if needed.

"The prime minister will repeatedly try to defer the definitive parliamentary vote on her negotiated Brexit deal, and the intensification of tail risks will continue to play a role in incentivising the eventual ratification of that deal."

JPMorgan said it thought May would now seek an extension to the March 29 deadline.

May, who has repeatedly said Brexit will happen on March 29, suffered a defeat in parliament on Thursday that undermined her pledge to EU leaders to get her divorce deal approved if they grant her concessions.

She has promised that if parliament has not approved a deal by Feb. 26, she will make a statement updating lawmakers on her progress on that day and lawmakers will have an opportunity on Feb. 27 to debate and vote on the way forward.

Irish Prime Minister Leo Varadkar said an extension to Brexit was possible but not inevitable.

The divergent views from two of the most powerful Wall Street banks indicates just how hard investors are finding it to read the labyrinthine plots and counterplots of Brexit, the United Kingdom's most significant political and economic move since World War II.

"Having chosen to afford the PM extra time this week, our expectation is that a majority of MPs (Members of Parliament) will finally be prepared to begin to take action to attempt to ensure that a "no deal" exit does not occur at that point," JPMorgan said.

"We continue to think it likely that, rather than allowing the vote and consequent ministerial resignations to occur, PM May will attempt to forestall by stating that she will seek an extension herself."

Most major banks got the 2016 referendum wrong.

The consensus then was that the United Kingdom would not vote to leave the EU. As results came in showing that it had, sterling had its biggest one-day fall since the era of free-floating exchange rates introduced in the early 1970s.

In private, though, many bankers are deeply worried about the possibility of a no-deal Brexit.

"The more messy this gets the more worried I am that we are heading for no deal," said an executive at one investment bank in London who spoke on condition of anonymity.

"We still expect a last-minute deal, but the closer we get to exit day we become less sure," the banker said.