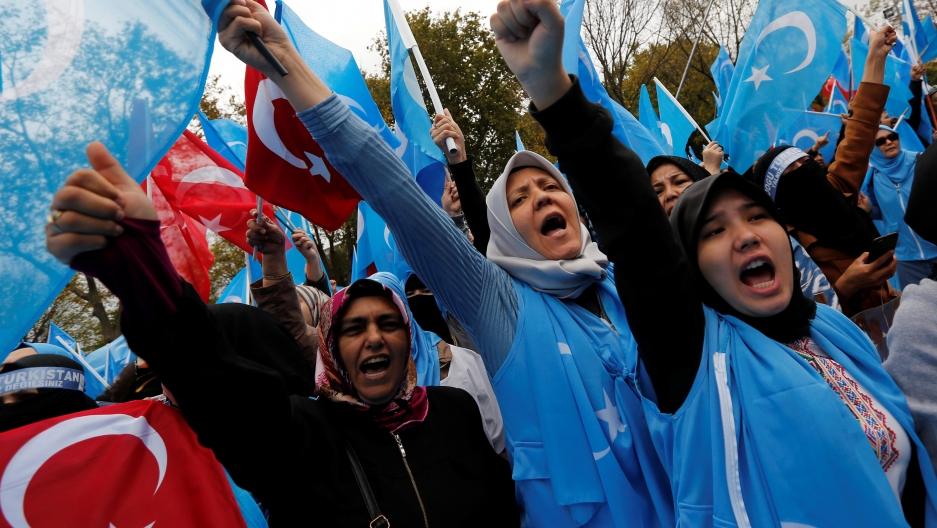 Demonstrators wave Turkish and East Turkestan flags as they shout slogans during a protest against China, in Istanbul, Nov. 6, 2018.

Turkey has leveled some blunt criticism at China for its ongoing crackdown against Muslims in the western province of Xinjiang. For advocates of the Uighurs, the ethnic minority with a long history in far western China, it was a welcome change in tone from the government of a Muslim majority country.

The criticism came in a Feb. 9 statement from an official at the Turkish foreign ministry. It said China’s detention of hundreds of thousands of people in detention camps is “a great shame for humanity.” The Uighurs are Turkic Muslims, with historic, cultural and religious ties to Turkey.

In fact, Uighurs refer to their historic homeland in Xinjiang as East Turkestan.

Turkey also called on the United Nations to get involved and to “end this human tragedy in Xinjiang.” It was the kind of criticism that Turkey has conspicuously held back in the last several years. For those who have looked at the human rights violations in horror, there is hope that it could be a tipping point.

Back in 2009, when deadly riots broke out in Xinjiang, Recep Tayyip Erdoğan, the current president of Turkey, was prime minister.

“The event taking place in China is a kind of genocide. ... There are atrocities there, hundreds of people have been killed and 1,000 hurt. We have difficulty understanding how China's leadership can remain a spectator in the face of these events.”

“The event taking place in China is a kind of genocide,” Erdoğan said at the time. “There are atrocities there, hundreds of people have been killed and 1,000 hurt. We have difficulty understanding how China's leadership can remain a spectator in the face of these events.”

Erdoğan’s tone with China has softened since then. In 2012, he was the first Turkish leader to visit Xingjiang.

“Turkey started to reimagine its place in the world, not as a country with a possible place in the European Union, a NATO member, and an ally of western powers,” said Mustafa Akyol, a senior fellow at the Cato Institute in Washington who focuses on Islam and modernity.

“Turkey has imagined itself as an ally of countries like Russia and China, and it started looking at the West with suspicion,” Akyol said.

Of course, Turkey is still a member of NATO, and it has connections with institutions in the European Union, Akyol says.

“But the political mood in the country has really shifted toward a more Eastern worldview,” he said.

And for the most part, Turkey has returned the favor by holding back from criticizing China’s mass incarceration of Muslims in Xinjiang.

But Akyol says public opinion has started to shift in Turkey.

Uighur activists living in Turkey, along with Turkish nationalist and religious opposition parties, have raised public awareness about China’s treatment of Uighurs and other Muslims in Xinjiang. As more people from Erdoğan’s own political base became more aware of the issue, Akyol says the Turkish president’s government faced increasing pressure to respond publicly.

Experts say more than a million people are being held in detention camps in Xinjiang. At first, China denied the existence of the camps. Beijing makes it very difficult for outside observers or journalists to operate in Xinjiang.

But the story has become more widely known in recent months, with attention from the United Nations and major international news outlets.

The Chinese government now justifies the camps as a necessary part of its overall counterterrorism policy for Xinjiang, where several violent attacks have been committed by Uighur extremists, according to Beijing, over the years. China alternatively refers to the massive detention centers for Uighurs and other Muslim minorities as vocational job training centers, or re-education camps.

From the Chinese government perspective, however, religion and culture seem to be the problem. One official Chinese version of the crackdown in Xinjiang appears to describe Islam itself as a mental illness, something linked with “extremist ideology” that must be eradicated as an “incurable malignant tumor.”

Nury Turkel was born in a Chinese re-education camp. It was during an earlier crackdown in Xinjiang, in 1970, at the height of China’s Cultural Revolution. Turkel is a 48-year-old Washington-based lawyer who came to the US in the mid-1990s and sits on the board of the Uyghur Human Rights Project.

Turkel’s parents are still back in Xinjiang.

“I have not seen my mother since my law school graduation in 2004, and my family suffering is still ongoing,” Turkel said.

“Despite efforts by the US government over the last 10 years or so, the Chinse have not allowed my parents to leave the country.”

The story is similar for many thousands of Uighurs living outside of Xinjiang, Turkel says. Just speaking on the phone with relatives back in China could land them in trouble with the police and even sent to a detention camp, he says.

This begins to explain why Turkel was so encouraged when he saw the criticism from Turkey about China’s treatment of Uighurs.

Beijing responded quickly to public criticism from Turkey, calling it “vile.” China’s foreign ministry said the Turkish government should understand the legal efforts that are being used to fight terrorism and extremism within its borders effectively, according to the South China Morning Post.

The state-run media in China dismisses international criticism of the crackdown in Xinjiang as a “fake news” problem.

The leadership in China is particularly sensitive about criticism from Turkey, says Rian Thum, an expert on Xinjiang at the University of Nottingham.

“To see Turkey take a stand, especially after they just received a very large loan from the Chinese, it’s quite a strong message."

The Turkey-China relationship has grown and improved in recent years, Thum says, and while critics in the US or other Western countries can be dismissed by Beijing as arrogant attempts to keep China down, a harsh critique from a prominent Muslim majority nation like Turkey cannot.

“To see Turkey take a stand, especially after they just received a very large loan from the Chinese, it’s quite a strong message,” Thum said.

A few examples of protest have come from Malaysia, Indonesia and the Organization of Islamic Cooperation. But it’s not clear if other Muslim countries will follow Turkey’s lead.

But Akyol says they should.

“This is one of the biggest religious freedom crises in the world right now. ... We have to re-think the principles of democracy, freedom, open society, human rights, again. Because we are at a time when authoritarianism is coming back in all corners of the world.”

“This is one of the biggest religious freedom crises in the world right now,” Akyol said.

“We have to rethink the principles of democracy, freedom, open society, human rights, again. Because we are at a time when authoritarianism is coming back in all corners of the world.”

“Muslims who are worried about the religious freedom of their co-religionists, and other people, should deeply worry about this,” Akyol said.