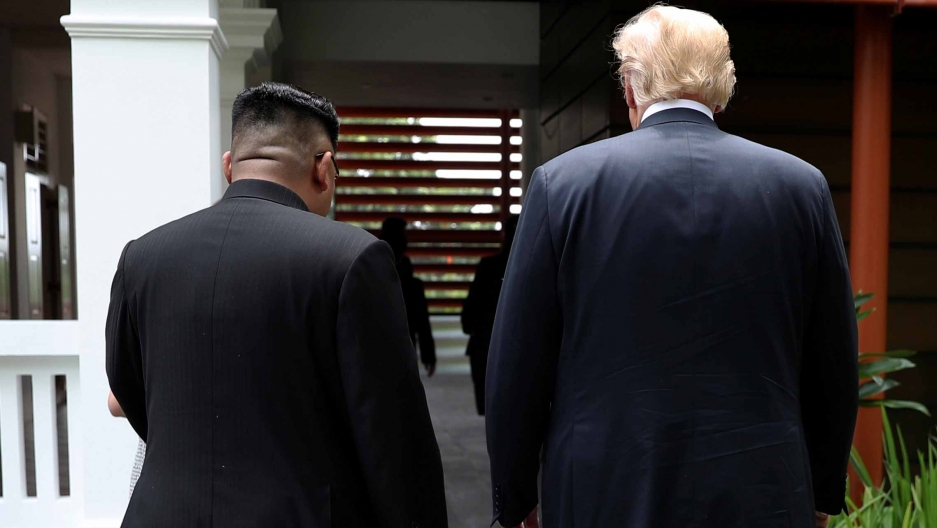 Donald Trump and North Korea's leader Kim Jong-un walk together before their working lunch during their summit in June 2018. Their second summit is set for Feb. 27-28 in Vietnam.

President Donald Trump and North Korean leader Kim Jong-un will meet in Vietnam in late February for a second summit, with the goal of ending a nuclear standoff between the two countries.

After the first meeting between the two leaders in Singapore in the summer of 2018, Trump declared a breakthrough in US-North Korean relations. He tweeted that there is “no longer a Nuclear Threat from North Korea.”

Eight months later, however, it is clear that North Korea’s nuclear weapons arsenal have not been curtailed in any significant way. The arsenal is estimated to include as many as 60 weapons and the rockets to deploy them are able to reach any spot in the US.

The US intelligence community’s Worldwide Threat Assessment, released in January, declares that North Korea has retained its nuclear arsenal. The Pentagon’s 2019 Missile Defense Report calls the regime an “extraordinary threat” to the United States.

Why have the nuclear negotiations failed to yield progress in the nuclear disarmament of North Korea?

Both will need to change if progress is to be made.

Trump decided to launch a trade war with China in 2018, immediately following his summit with North Korea.

That’s a problem because Chinese cooperation is key to Trump’s effort to impose maximum pressure on North Korea to give up its nuclear weapons. More than 90 percent of all North Korean trade is conducted with China alone — giving Beijing, by far, the greatest economic leverage over Pyongyang. China began wielding this leverage in 2017 as it started enforcing UN trade sanctions on North Korea. However, in the past year, China has retaliated against Trump’s tariff hikes on Chinese exports in part by relaxing its enforcement of sanctions on North Korea.

Coal imports, construction projects and tourism from China to North Korea have all increased. There has been a sharp spike in oil and gasoline smuggling operations into North Korea, mostly from Chinese ships.

US allies and major trade partners, including Europe and Japan, share many of Trump’s concerns about China’s suspect trade practices and how it harms their economies. But they believe less combative approaches to China are preferable. A shift away from the confrontational approach would likely lead to increased Chinese cooperation with the sanctions campaign on North Korea.

The US strategy towards North Korea is based solely on forcing the country to surrender its entire nuclear program before offering relief from sanctions.

Studies have shown that sanctions alone can be insufficient to convince a foreign government to abandon a program that it has long viewed as essential for its survival.

Kim Jong-un has vowed that North Korean disarmament will not happen without the US making concessions.

The US could just as easily use gradual relief from sanctions as leverage in exchange for disarmament steps. In the past, when North Korea took nuclear disarmament steps in 1994 and 2008, they did so partially in response to offers of sanctions relief and aid from the United States, South Korea, Japan and other allies.

There are steps beyond sanctions relief that can also prod North Korea towards disarmament. Security guarantees are among the most important incentives to offer during negotiations. North Korea has made it clear, that any substantial disarmament will come only after the US and its regional allies promise never to attack North Korea.

A large economic, energy and food aid package from the US and its allies could markedly improve the quality of life in North Korea. The country urgently needs assistance, and the ability of the US to meet this need gives Washington leverage over Pyongyang. In his recent speech, Kim Jong-un declared that economic growth is the nation’s top priority. Per capita income in the country is just one-tenth that of South Korea, and 40 percent of the population suffers from malnutrition.

Aid would not be cheap.

A study estimated that an effective aid package would cost US$30 billion. However, the costs could be spread over time, and would be shared across donor nations.

This happened in 1994, when nearly 50 countries contributed financially to a deal which, although it eventually broke down, significantly curbed North Korea’s nuclear activities for many years.

Trump’s second summit with North Korea provides him a second chance to reconsider his unyielding trade approach to China, and his reluctance to use incentives to encourage North Korean disarmament.

Persuading China to resume its cooperation with the embargo would increase for Kim the costs of resistance, and adding incentives would enhance the benefits of compromise.

Taken together, these measures could increase the chances that North Korea will finally begin dismantling its nuclear arsenal.