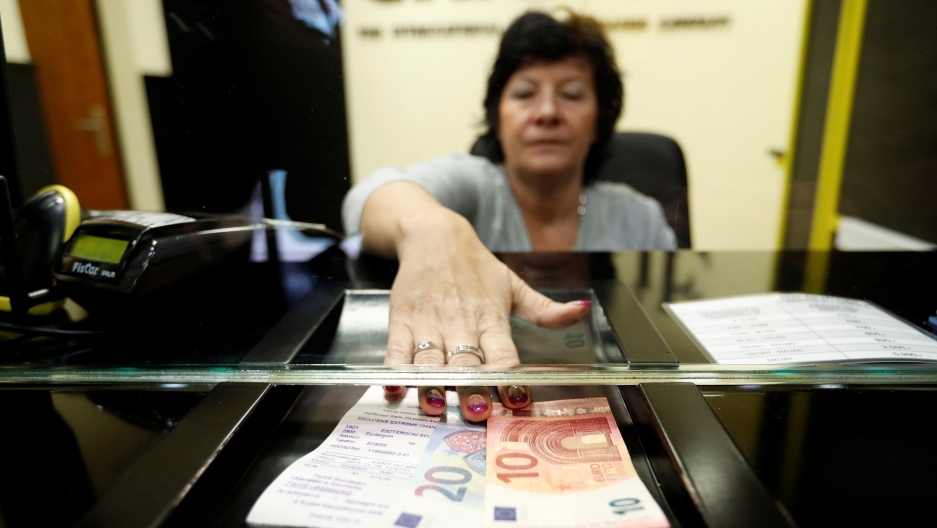 A Hungarian woman exchanges forints for euros at a currency exchange shop in Esztergom, Hungary Nov. 11, 2017.

In exchange for all the baby-making, he's willing to provide financial benefits and programs for women. Benefits include loan expansion programs, subsidies for cars, and for women with four or more children, no required income tax.

“In all of Europe there are fewer and fewer children, and the answer of the West to this is migration. They want as many migrants to enter as they are missing kids, so that the numbers will add up," Orbán said in his annual state of the nation address. “We Hungarians have a different way of thinking. Instead of just numbers, we want Hungarian children. Migration for us is surrender.”

Orbán and his wife have five children.

The World's Marco Werman sat down with Kim Lane Scheppelle, an expert on Hungary and a professor at Princeton University, to chat about the motives behind Orbán's latest pro-baby policy (this is not the first time) and how women fit into Hungarian society.

What do you make of Orbán's announcement over the weekend that women with four or more children won't have to pay income taxes? What's that about?

Orbán has backed himself into a corner and he's using a way to get out of that corner that we've seen before. So the corner he's in is that Hungary really has a failing economic model. His policies have driven, some say, up to a million Hungarians out of the country and yet he's also come down very hard against any form of immigration. So, the question is: "How [can] Hungary maintain a labor force if it's losing its population?" And his answer is: "Let's get women to have more kids so that there will be Hungarians to actually hold up the economy." Now, it's all very familiar because Orbán has a terrible track record on women and so the idea that women are going to bail him out of this problem is something that I think is familiar to a lot of us who watched him in action for a long time. So, women are going to bear the burden of Orbán's failed economic policies.

I mean, it's obviously oppressive for women. Is Orbán also trying to create kind of, Hungarian human facts on the ground, kind of an anti-immigrant policy?

Yes. Well, this is part of his policy to shore up Hungary for the Hungarians. I mean Hungary, like many of the countries in Eastern Europe and, for that matter, like many advanced democracies around the world, is having a declining birthrate. And if they don't have immigration or some other way of bolstering the population numbers, they're going to be a declining country and now that Orbán has come out so strongly against immigration, this is his way back. One thing I think it's important to say about Orbán and his policies about women is that he's long been an advocate of big families. He himself has a big family. This is something that very much comes with the territory of Hungarian nationalism. And right now, the group in Hungary that has the largest families are the Roma minority who have really taken a hit under the Orbán government. So it'll be interesting to see whether his policy really applies universally or whether it applies only to the Hungarians.

How does Hungary's treatment of women in 2019 compare to the Communist era?

Well, in the Communist era, of course, women were recruited into the workforce and were actually promoted at much higher levels than they are now. So, in some ways, the Communist era was a golden age for women. Now, it was a golden age and it wasn't — since it was so awful for everybody — having a great fate in a golden age means that you're not so well-off. So, you know women were overwhelmingly all of the all of the judges, all of the doctors, some professions that we think of as relatively prestigious professions were actually completely dominated by women during the Communist time. Now, of course, they were dominated by women because they weren't such high-status professions then. But still, women have really had a lot of education and a history of great accomplishment in Hungary. The post-Communist period saw women really getting knocked back into very traditional roles.

Job ads started being highly gendered. So, you know there would be an advertisement for a manager and it would literally say "we want a man for the job" or "secretaries with flirtatious abilities." And those would be jobs for women. So this kind of segregation of men and women has happened throughout the post-Communist time and Viktor Orbán's party has simply made that worse.