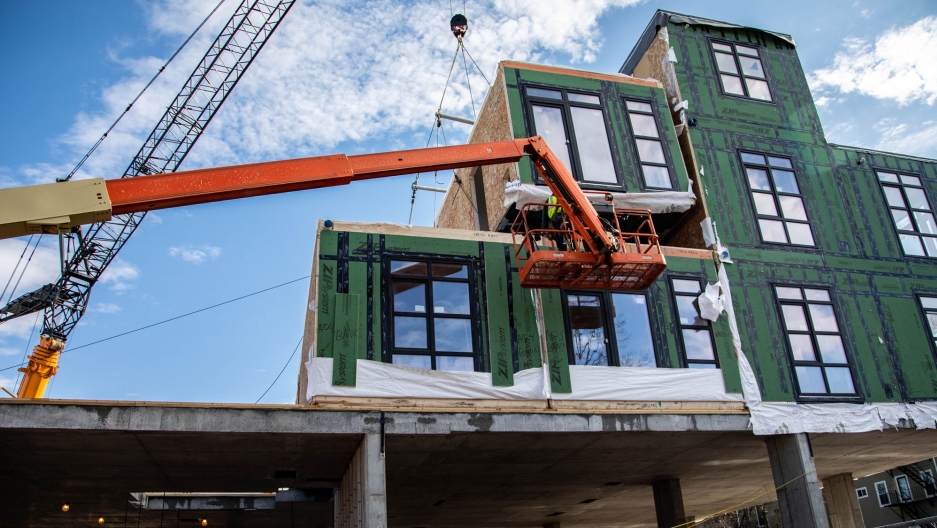 A 65-by-13 modular unit dangles from a crane while being lowered in place as part of a 68-unit apartment complex in Newton, Massachusetts.

In the age of hyperglobalization, it seems that pretty much anything can be outsourced. Well, not anything. I mean, you couldn’t build an American hotel or apartment building in China or Eastern Europe, right?

In the city of Newton, Massachusetts, just outside of Boston, large boxes — 65 feet long and 13 feet wide — dangle in the air from a 600-ton crane. They’re being stacked on top of each other like Legos.

“They fit together like Lego blocks,” said architect Arthur Klipfel, who is developing the 68-unit apartment complex. "One box has the bedroom in it. The other box has a living-dining-kitchen in it." 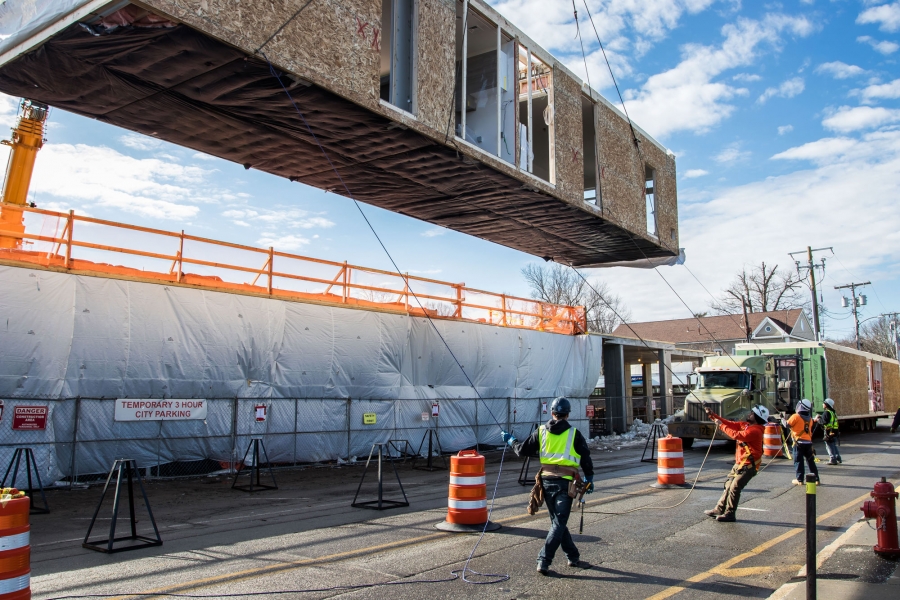 Workers help guide a modular unit onto an apartment complex under construction in Newton, Massachusetts.

Klipfel also designed the “modulars” — independent pieces that are fitted together to form a building. His company, Green Staxx, allows architects to choose from his library of more than 20 standardized boxes.

“The boxes can come with the kitchen cabinets, the flooring, all the bathroom fixtures, the prime coat of paint, the electrical,” said Gwen Noyes, Green Staxx’s chief operating officer and Klipfel’s spouse.

For the project in Newton, the modular work was done 350 miles north, in a Québec factory operated by RCM Group. Here's a company video explaining how RCM builds modulars.

“[Construction workers are] working in a controlled environment, ” Noyes said. "The factory is beautiful. They have year-round work, and they don't have to deal with the weather." 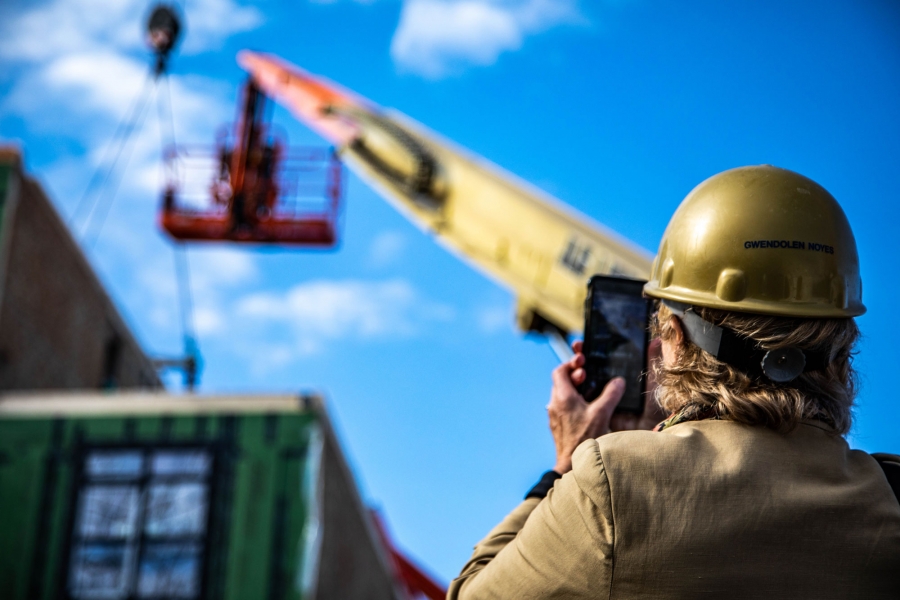 Gwen Noyes, Green Staxx’s chief operating officer, takes a photo of a modular unit being lowered onto an apartment complex under development in Newton, Massachusetts.

While Noyes is happy with her Canadian partners, she’d also like to have more options to build closer to their projects. Right now, however, there just aren’t modular factories nearby that can accommodate the scale of the Newton project. And so, the finished boxes are trucked down through Canada, through the woods of Maine, then on to eastern Massachusetts.

There are lots of variables affecting cost. The developers can pay rural Canadian carpenters somewhat less than Boston-area workers. But delays on the roads and in staging yards can add up if workers and equipment are left waiting at the job site.

But the real cost savings to building a building off-site in a Canadian factory is speed.

"If a project saves four months, you're saving an incredible amount of money," Klipfel said.

Noyes and Klipfel see factory-built modulars as an affordable, quick solution to housing shortages in Boston and cities across the globe. Their prefabricated designs are also built green, with insulation and energy-efficient heating and cooling built in. 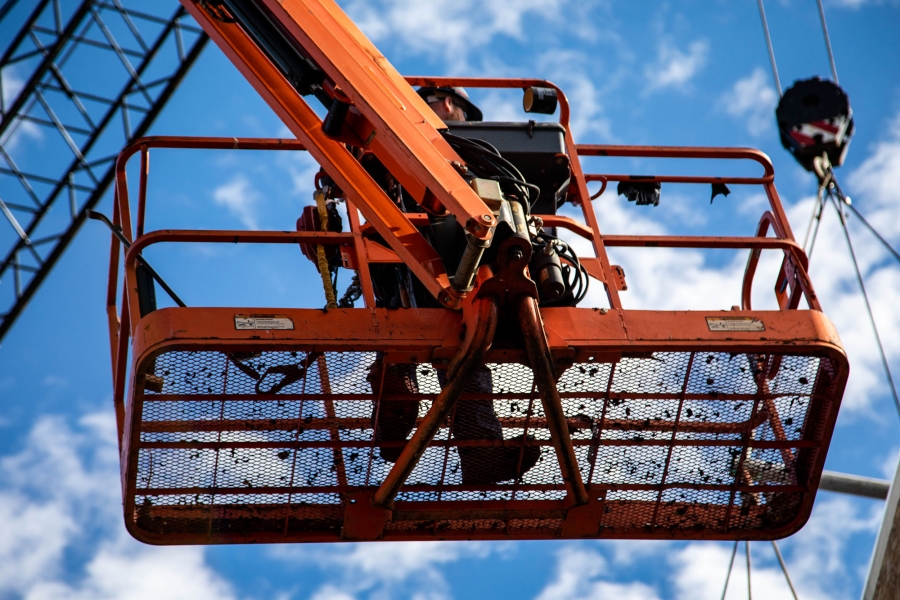 A worker stands on the platform of a hydraulic crane during the construction of a modular apartment building.

Modulars have been around since after World War II. But with improved technology and logistics, developers are taking the idea more seriously.

“It’s absolutely a trend,” said Stephani Robson, a senior lecturer at the School of Hotel Administration at Cornell University. “In fact, I think it’s going to be the way many hotels will be built going forward.”

Robson points to a hip, Dutch boutique hotel brand, citizenM, which recently opened a property in New York. The rooms were constructed in Poland.

In Poland, the modular boxes are fitted with pretty much everything, including mattresses and television, said de Geus, who is with Dutch firm Concrete.

Here’s one limitation though: size.

“CitizenM has a very small bedroom, it’s just the width of a bed,” de Geus said. “It really is a room within the size of a sea container.”

Visualize that: You’re spending the night in a shipping container, but with a bed, desk and bathroom. (You have to climb off the foot of the bed; the sides touch the walls.) The rooms do look sleek and modern — and comfortable — but may not be for everyone. 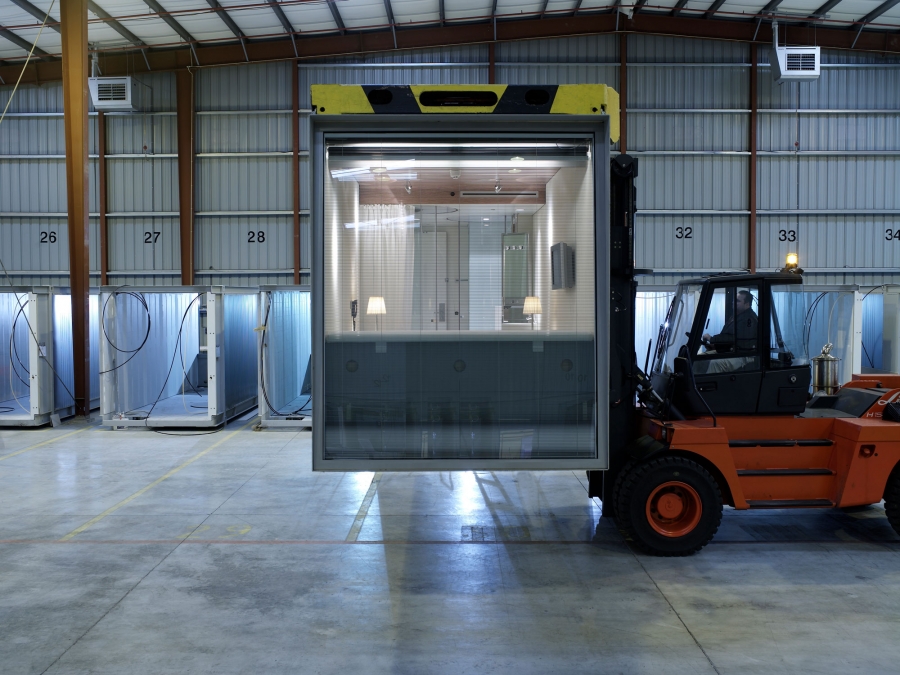 A modular apartment unit from citizenM is moved using a forklift.

That’s one major limitation with most modular buildings — architects just can’t get that creative.

“The issue is that the pieces themselves have to conform to whatever the transportation infrastructure can handle,” Robson said. “But that doesn’t mean we won’t see some innovations where we can build a larger guest room out of multiple components.”

Another limitation is distance. One architect I spoke with said when you’re building rooms in factories halfway across the globe, you just can’t keep a close eye on quality controls, and that can lead to serious issues. For example, if a small plumbing error is made with a hotel room built offsite in a faraway factory, the mistake can be magnified 300 times before it’s corrected.

But this story isn’t just about architectural innovation; it’s also about jobs that are shifting across the globe. On the West Coast of the US, some modular units are being constructed in China.

“We know there’s no stopping progress,” said Justin Weidner, chief of staff at the Carpenters Union, which has 500,000 members in the US and Canada. “[But] traditionally this has been a trade and a career where you didn’t have to worry about offshoring. But with modular construction, that’s definitely a concern. However, it’s coming. People are always looking for ways to be more efficient and productive, and this is one of the ways they’re using.”

And Weidner also sees opportunity — more modulars means more construction. And the Carpenters Union has already forged relationships with some factories building them.

“There will be lots of jobs, they’ll just happen to be in factories instead of on job sites,” Robson said.

The question is: Where will those jobs be? For a new Boston hotel, for example, will the rooms be built in Poland or New England?